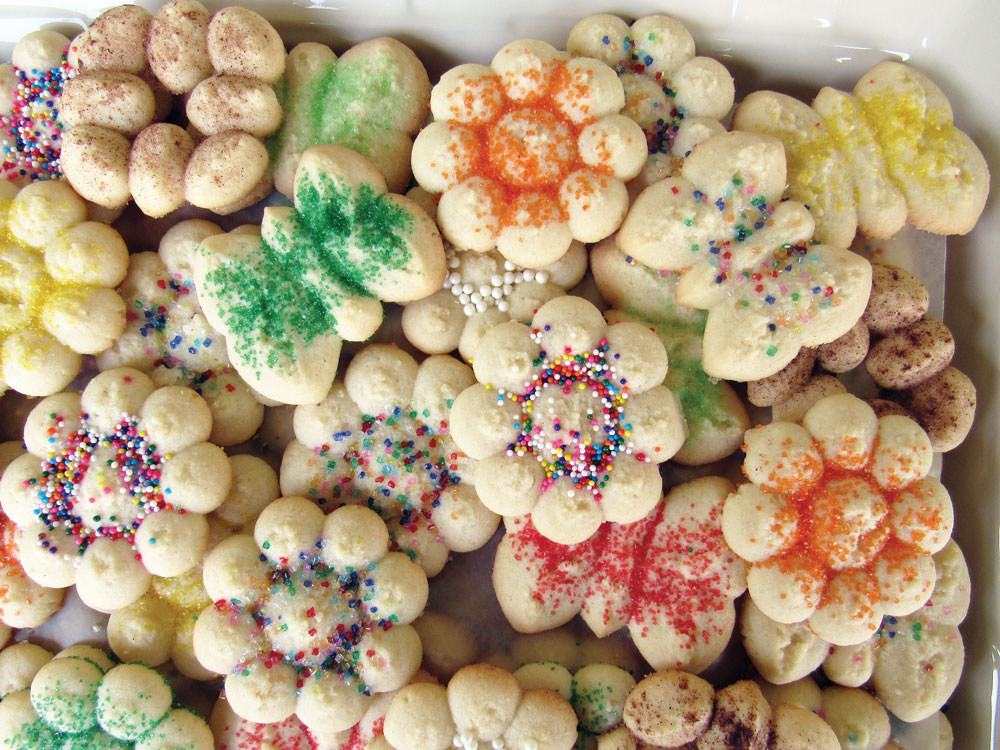 My Sunday School class was having a Saturday-night get together. We were going to gather at the church for pizza and fellowship. Everyone was encouraged to bring their children.

Since I like to bake, I decided to make a dessert to go along with the pizza. I asked Brad if he had any requests and he suggested making cookies.

Today’s recipe comes from Pampered Chef. I’ve had several Pampered Chef parties. I got their cookie press at a party and I decided to use it for this event.

To start the process, I let the butter soften then added the sugar to the large mixing bowl. I used my stand mixer to cream the two then added the egg and vanilla, turned up the speed and let it go until the ingredients were mixed well.

After squeezing out about a dozen flowers, I needed to add some more dough to the press and decided I’d change the disc to a butterfly. I thought kids might like different shaped cookies.

I have lots of different sprinkles so I alternately put sprinkles on some, colored sugar on others and white sugar pearls on others. If I was creative, I would have tried to do some details on the butterfly wings, but I’m really not.

When the first pan of cookies was full, I put it in the oven and set the timer for 10 minutes.

I decided to use a silicone mat on a second cookie sheet just to see if it made any difference when baking the cookies.

After the second cookie sheet was full, it was time to load the cookie press again and the timer sounded. When I peeked in the oven, I thought the cookies needed to bake a couple more minutes so I set the timer for two minutes. When I removed the first batch from the oven, they were a little more brown than they should have been so I decided maybe 11 minutes would be the exact amount of time to bake the second batch of cookies.

The third time I loaded the cookie press, I tried another disc. When I squeezed the trigger and lifted the press, nothing happened. The cookie dough came out of the press but it would not stick to the pan, the dough was just stuck to the press. I tried using that disc several times, but each time the same thing happened. I tried squeezing the dough onto the metal cookie sheet and it didn’t stick. I tried squeezing the dough onto the silicone mat and it didn’t stick. So I just gave up on that disc and moved on to another.

When I was almost finished with the dough, I decided I’d sprinkle some of the cookies with cinnamon sugar. I thought that might be a little different. And Brad likes cinnamon sugar.

When all the cookies were baked and cooled I thought they looked good. I held off trying them, though.

We headed to church that evening, cookies in hand, and had a really good time. We didn’t have a lot of people attend as several families were out of town camping, but we did have a great time getting to know one another. We made a circle in the church gym, said a prayer and headed to the buffet line.

In fact, the cookies were such a hit with the children and adults, I didn’t have to worry about taking very many home.

I definitely nailed this recipe. I think it would be a perfect one to make with our grandkids. I’m sure they would like squeezing the trigger and putting their own spin on decorating them.