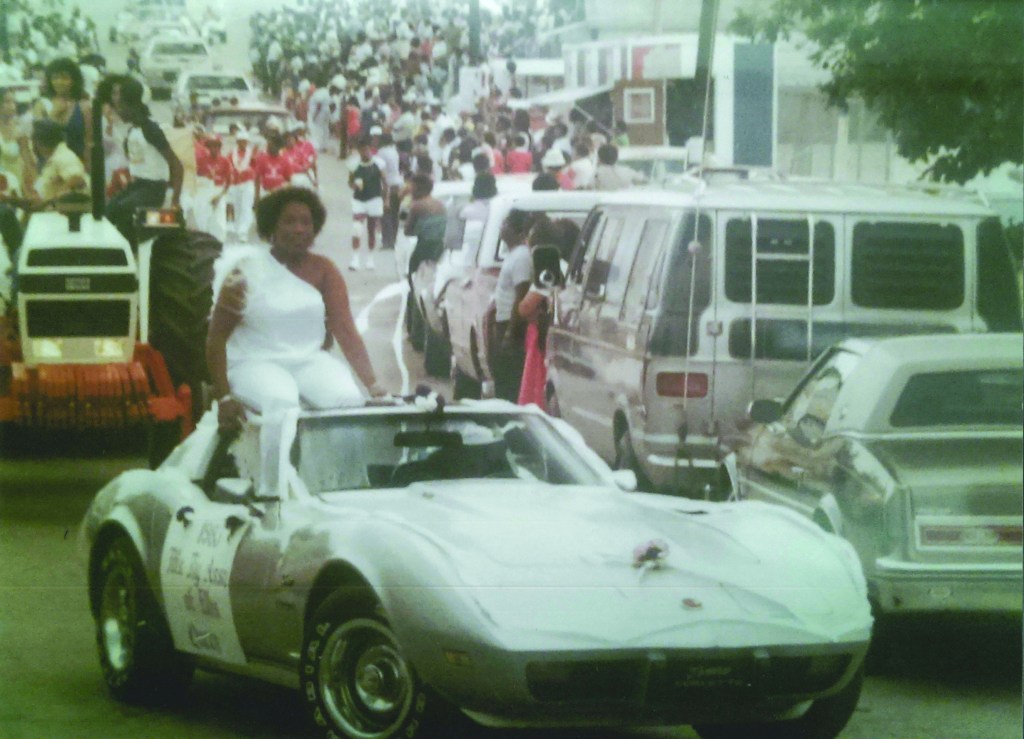 A photo by James Robinson shows a Labor Day queen riding in the annual Labor Day Parade in 1975.

Next week, Aug. 27 to Aug. 31, is Local History Week at the Clark County Public Library, which includes four nights of Kentucky history programs before the Daniel Boone Pioneer Festival. That will be followed by the wonderful Labor Day Parade organized and facilitated by Winchester’s African-American Labor Day Committee.

This year, James Franklin “PeeWee” Robinson has made it possible for the library to display an exhibit of his photography that joyously celebrates that century of African-American community commitment.

Robinson is a lifelong resident of Winchester. He played sports here as a child, coached football, baseball and tennis as an adult and owned PeeWee’s Jazz and Blues Club, a popular and swingin’ music venue.

His photography is a tribute to the life and the luster given to Winchester by the black community.

If you come into the library for this week’s Local History Programs, your visit will be incomplete and not half as entertaining as it will be if you first stop to see Robinson’s exhibit.

You will see great street photography of enormous crowds of Labor Day celebrants watching parade vehicles wind through the Bucktown section of Winchester.

Other pictures show Christmas and New Year parties at PeeWee’s Jazz and Blues. That club also acted as a place where families had wedding parties and reunions, and a couple photographs capture the evening Michael Warren, who played Officer Bobby Hill on NBC’s award-winning police series “Hill Street Blues,” came to talk to local youth.

Speaking of kids, some of James’ best photos are of kids having fun together. It’s evident there’s mutual love between James and his subjects. The pictures beam.

Robinson brought his devotion to his community and his sharp eye to every picture he took. I love the energy intuitive photography reveals. Looking at his pictures, I feel the joy of the moment.

For Local History Week and for the whole month of September, come see a vibrant part of Winchester’s history that has gone unacknowledged far too long. Robinson’s photography will renew your sense of how lively Winchester can be.

Here are the other activities happening during Local History Week. All programs are free and open to the public. Refreshments will served at 6:30 p.m. Programs begin at 7 p.m. Register by calling 859-744-5661, or use the Evanced online registration system on the library’s home page, www.clarkbooks.org.

— Monday, “The Bluegrass Heritage Museum: Landmark Institution,” presented by Sandra Stults, museum director. Stults will kick off the week with a presentation highlighting the history of the museum, the artifacts conserved there and what goes on behind the scenes. She also has exciting news about a new collection.

— Tuesday, “William Wells Brown: How I Got My Name.” Portrayed by Virgil Covington Jr., William Wells Brown was the first published African-American novelist and playwright. His memoir, “Narrative of William Wells Brown, a Fugitive Slave, Written by Himself,” directly influenced the abolitionist movement. In 1853, he published “Clotel; or the President’s Daughter,” and in 1858, a play, “The Escape; or a Leap for Freedom.”

— Wednesday, “Kentucky’s Private Civil War: The Politics of Allegiance in an Occupied State,” presented by Dr. Christopher Phillips. This talk focuses on aspects of the Civil War in Kentucky that are lesser known, in which loyalty politics deeply affected the state during the war and for many years after.

— Thursday, “Adolph Rupp: The Coach,” portrayed by Dr. Edward B. Smith. During the 42 years he coached the University of Kentucky men’s basketball team, Rupp raised the game to near-religious status in the Commonwealth.

All programs are funded in part by the Kentucky Humanities Council.

The library will be closed Sept. 1 to Sept. 3 for Pioneer Festival weekend and Labor Day.

Have a swell Labor Day.