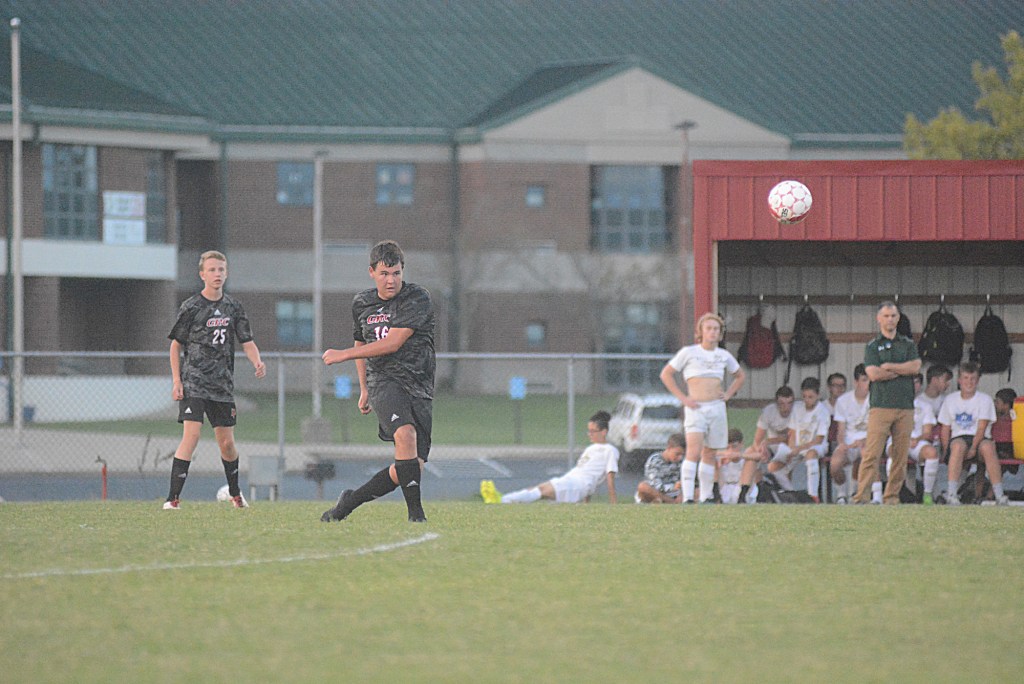 Wade Carrington kicks the ball across the field Monday in the Cardinals' 2-1 loss to Rowan County. (Photo by Micah Satterly)

The George Rogers Clark Cardinals took a 2-0 loss at home to the Rowan County Vikings Monday.

The Cards controlled the tempo from the start and had possession of the ball for most of the first half, but failed to could not put the ball in the net.

Junior Tyree Brown had two early chances on goal, one of which the goalkeeper barely gained control of, to give GRC an early lead but could not connect.

Rowan took advantage of their limited possession time and scored with just under 4 minutes left in the first half.

The Vikings went on to seal the game with their second goal with 18 minutes left in the second half.

Head coach Walt Ridener admits Monday’s match was a bump in the road for GRC.

“Every once in a while we just have hiccups,” he said. “We have them in spaces and places that are critical and those results in goals. We have had that happen quite a bit to us this season. We are young and we are still growing. We probably had 75% possession this game and we needed to poke one in. That is the biggest issue for us now.”

Sophomore midfielder Jonathan Stefanski said his team could not keep up the pace with Rowan.

“We just were not quick enough,” he said. “We choked a couple times in the back field. We had good runs coming forward, but midfield was not getting it off fast enough for us.”

GRC is now 1-4-1 on the season and has only nine combined seniors and juniors, which means the team is built on a young core.

Stefanski said his team needs to stop being indecisive and more aggressive on defense to put more wins under their belt this season.

“Our defense has to step up,” he said. “We are just not fast enough with our decision making in the top third. It is just not good enough right now.”

Regardless of the standings and statistics, Ridener said he has been pleased with how his team has handled adversity this season.

“We are improving every game,” he said. “Every game, we have initiated a new system and have improved on it. There has been a lot of improvements the last two games. It is just a matter of who is going to step up and be the forward, strike, or whoever to be able to poke some goals in.”

Ridener said his team had many chances to capitalize and bring the game in their favor.

“We took way too many touches around the goal and we needed to just put it in the frame. I know they are trying to put the ball on their best foot to get the best shot, but at some point, a rebound is better than nothing. Maybe you get a rebound off, pick up some trash and score that way. I can’t get them to see that yet, but we will work on it.”

GRC will be on the road at Frederick Douglass Tuesday and Ridener said there are many aspects he would like to see different from his team.

“We have to be better at going north and south instead of side to side,” he said. “We need to look at getting the ball into places like the corners where we are designed to do so. Once that happens, we need to be able to finish on a cross. That is what we need to do right now. We need to get the ball there first and the next step is to finish on those crosses.”