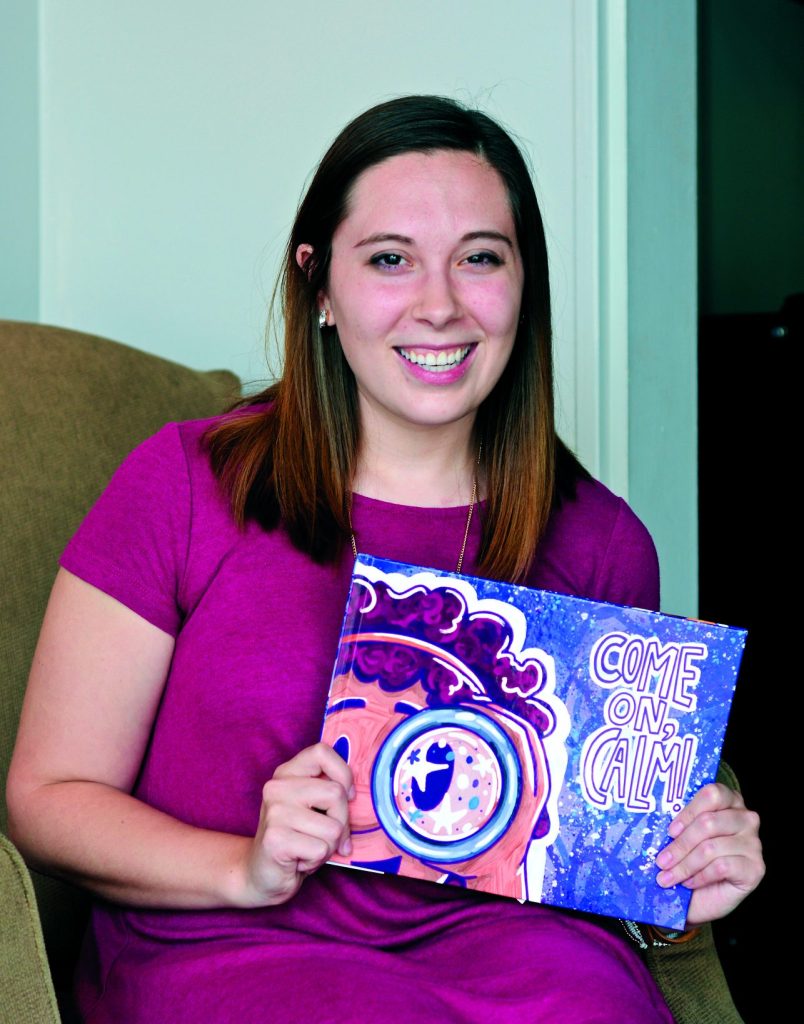 During her gap year before graduate school, Brown, an aspiring speech-language pathologist, worked in the Washington, D.C., metro area at Imagination Stage, an accessible and inclusive performance arts organization.

“Any student with any need is welcome to come to sign up for classes. We provide all the accommodations,” Brown said.

Brown helped with the accommodations; she said she discovered one of the most helpful tactics was to take a break.

“Everybody is going to do better after you’re in your best mindset after you had that moment of pure joy,” Brown said. “And so it was always trying to problem solve and figure out what got our student to that great headspace so that they could come back and re-engage. And it was during that time when I started thinking about, wouldn’t it be just great if there was like a book that we could say, like, ‘Hey, you want to read this book with me?’ And it would be kind of like a sneaky way of giving a break.”

Brown couldn’t find such a book, so she decided to write one in November. She is set to release “Come On, Calm,” later this year. “Come On, Calm” is a whimsical children’s book encouraging readers of all abilities to self-soothe through sensory and breathing tasks.

Lexington resident Joseph Wrightson illustrated the book. Wrightson is a music educator by day and a freelance graphic designer by night with a degree in music education from the University of Kentucky.

Brown said a book is a particularly sneaky way of helping because a lot of the students she worked with had a negative connotation with accommodations.

“They didn’t want to feel like they were special,” she said.

Brown said the book’s message and calming strategies are universal, and anyone can benefit.

Brown, a Winchester native, Providence Elementary and Conkwright Middle School before moving to Fayette County with her family in 2007. From there, she went to the University of Georgia to pursue degrees in communication sciences and disorders as well as theatre.

In the coming weeks, she will leave again to Boston to attend Emerson College but not before making a stop in her hometown to give a sneak peek of her book, “Come On, Calm.”

Brown read the book to students at Methodist Little Learners preschool today for their first day of school. Brown is a Little Learner class of 1999 alumna.

The first day of school is a high-energy day for students, teachers and parents alike. Brown brought the students some drama, art as well as the latest draft of the book in a workshop designed to reduce some of those first day jitters.

She said she would also be doing sensory activities with the students.

“We’re immersing ourselves in the imaginative experiences,” she said.

Brown will also be doing a few other sneak peeks in Lexington.

Brown said she would be talking with the students about what it means to feel “scribbly” like the characters are at the start of each adventure.

“When you feel scribbly, it’s not quite yourself,” she said. “So the idea is that whether you’re frustrated or excited, you have this energy bounding out of you. And so we’re going to explore the idea of like, what does that feel like to be scribbly? What kind of color would you use when you’re angry, or when you’re frustrated? Or excited?”

Brown said then they would discuss how to find their calm.

Each page of the book explores a specific calming strategy such as sniffing flowers, zipping jackets while taking deep breaths, etc., all in the guise of imaginative characters and their various adventures from jungle trips to playing in the sand to facing the arctic cold as a Viking and more.

“It’s a great way to build that same vocabulary so that later when you notice your kiddos that got that either frustrated energy or anxious energy, then you can say, we need to sniff a flower right now,” Brown said. “And everybody has that same image of Oh, yeah, this is what we do. Sniff, sniff, sniff.”

Brown said the book could be a continuous tool for teachers, parents and grandparents as a way to share the calming strategies.

Brown said she also focused on diversity and inclusivity in “Come On, Calm.” She used characters that had a mixture of abilities and skin tones.

“We wanted it to be a book where all kids could find themselves in someone,” she said. “And so we’ve got this little buddy that has a guide dog, and we have someone with a cochlear implant.”

Brown said it was important to her because she noticed how children want to look at themselves in the media they consume.

“I worked at Lexington Hearing and Speech for a summer and [children] would sometimes draw hearing aids or cochlear implants in the books so that they could see kids in books that also had the same things that they do,” she said. “And that’s not fair that their stories aren’t being shared.”

Brown said anxiety is a quickly growing diagnosis in today’s young people. She wants to empower little readers to listen to their bodies and arm them with the tools they need to take a break and re-engage.

“Come On, Calm” will be available for sale online at kelseyrosebrown.com/comeoncalm when it is released.

Brown said she hopes her book will help children find their calm. To find her calm, Brown noted enjoys exercising and practicing self-care.

“Come On, Calm” has already received an outpouring of positive feedback, Brown said. She had sent a draft copy of the book to friends, school counselors, therapists, theaters, music therapists, teachers, parents who have students with disabilities and more to have them read it through.

“Overwhelmingly people were saying, ‘Wow, like, I see so many uses for this book. I think you should look into this field. These people could use it,’” Brown said. “…I think we’ve really started to see the broader uses and not just for students with disabilities, but for whole classrooms.

“…Everybody needs to take a breath, ground themselves from time to time.”