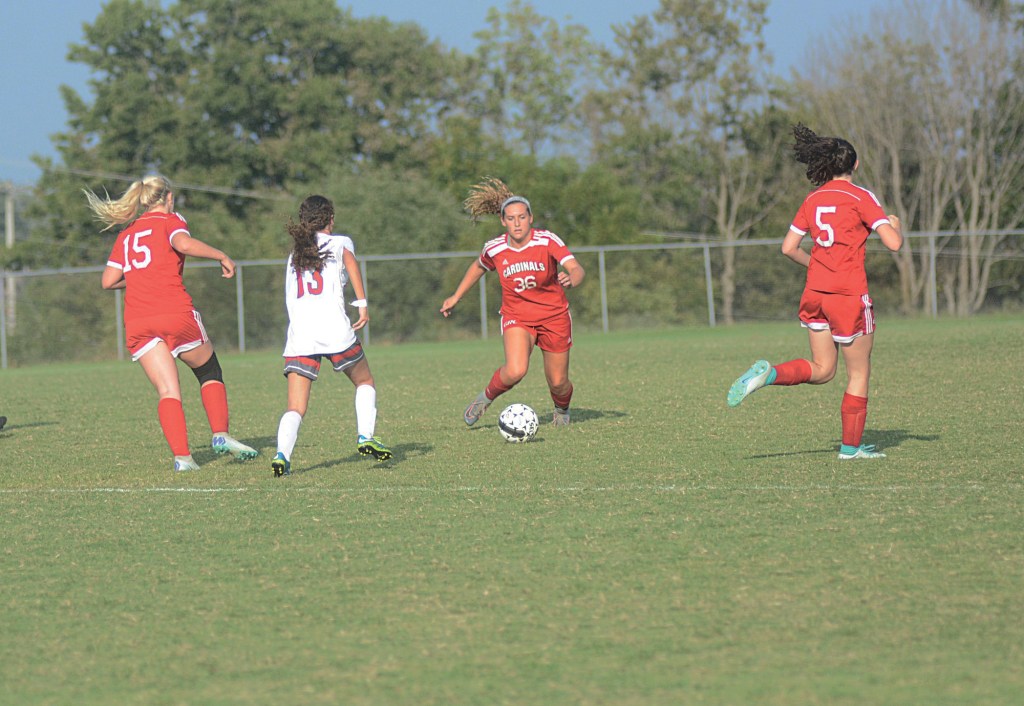 Senior Taylor Kelly strips the ball away from a Corbin midfielder and searches for an open teammate in the Cardinals' 7-1 win Tuesday. (Photo by Micah Satterly)

The Cardinals controlled the tempo of the entire game allowing only two shots from the Redhounds, in which both were free kicks and one managed to find the back of the net.

GRC scored six of the seven goals in the first half with Julia Pohl and Allie Bush both recording two goals.

Pohl said she was proud of her team’s chemistry in Tuesday’s win.

“I think that we played really well together,” she said. “We had some down sides and I do not think we played our hardest in some parts of the game. We got our long runs and we completed passes to put it in the back of the net.”

Head coach Matt Abner said he liked how his team shared the ball and was proud of how different players stepped up.

“I liked our ball movement the most,” he said. “We used a lot of different players tonight. One of the best things that I got out of it was the young girls got the chance to play and took advantage of their opportunity to show me what they can do. I have got a lot more confidence in some of the players, so I feel like our bench is deeper than I thought it was. The speed of play was not where I wanted it, but that is sometimes something you can expect when you are dominating a game.”

GRC returned home after playing three games against teams from Tennessee in Gatlinburg this passed weekend and managed to bring back a 1-2 record in the Smoky Mountain Cup.

Pohl said the opportunity her team had to play against teams from another state helped with the adversity they may face later in the season.

“It was a little different there, but not too much,” she said. “I think it got us a taste of different teams and how they play. It let us adjust a little bit and made us find things we need to get better at.”

“I think we enjoyed it,” Abner said. “We always do. We get a more relaxed feel when we go and when we come back, we understand everybody kind of wants the same thing. Once you leave a game, and say we did not play that well and lose it, you think ‘hey, nobody is mad at me.’ Everybody is on the same page without outside influence. We stay together and the kids enjoy the time together and the extra stuff. We learned a lot about our team.”

Abner said losses are not always bad and they expose parts of a team to help figure out how to be on the same page with one another.

“I always say with losses you learn more than you ever do with wins,” he said. “So, those two losses really showed some of our weaknesses and where we need to work. We will continue to work on those things and improve each day. It helps us prepare for the end of the season and ultimately what we are shooting for is a deep run in the postseason.”

GRC will return to the soccer field with an away game at DuPont Manual Wednesday beginning at 6:45 p.m.