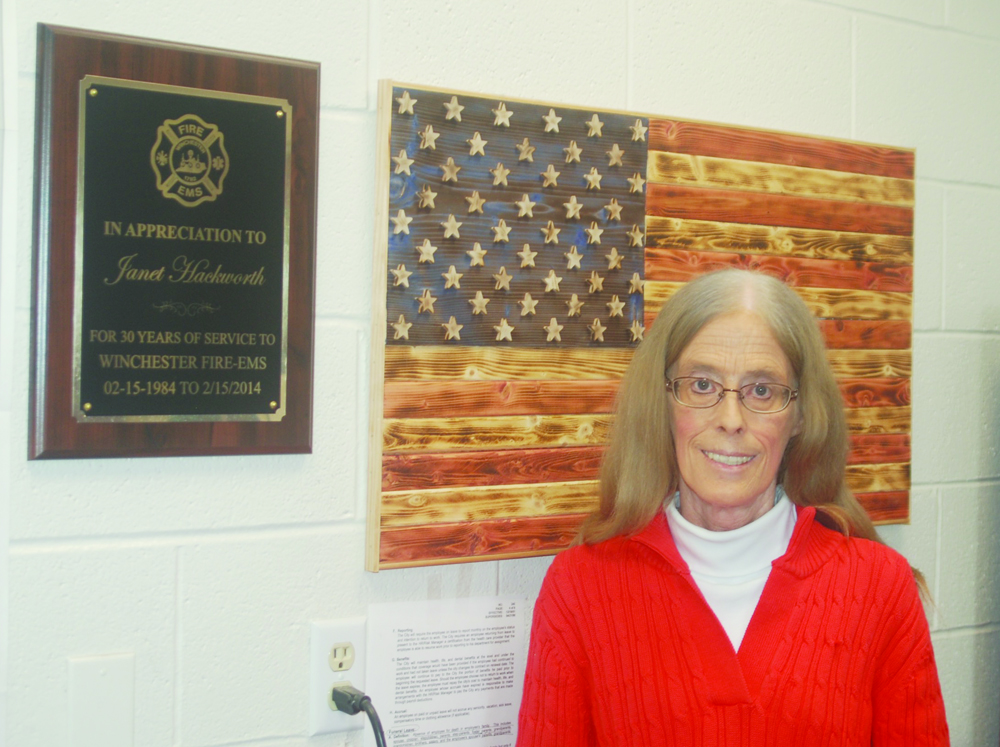 Janet Hackworth is the administrative assistant for Winchester Fire-EMS, a position she has held for nearly 35 years. (Photo by Fred Petke)

For nearly 35 years, Janet Hackworth has been answering the telephone and running the office for Winchester Fire-EMS.

When she started in 1983, it was just the fire department, as the ambulance service was a separate entity.

“I think I just applied for the job,” Hackworth said. “That’s when Mary Columbia was over personnel. I had to take a typing test and interview.”

In those pre-merger, pre-911 times, things were considerably less hectic around Station 1 on Maple Street.

“When I first started, there were no ambulances and it was pretty quiet,” she said. “We had a red phone in the lieutenant’s office. When it rang, we had a call. Other than that, it was pretty mellow down here.

“All we did was go to fires, help ambulances and pump out basements.”

It wasn’t long before Hackworth, a lifelong Winchester resident, was handling the dispatching as well. Before 911 was implemented, the fire department had a separate emergency phone number listed in the phone book, she said, for public use. Hackworth would then relay the information to the firefighters as they responded.

“I got to dispatch during the day,” she said. “I did that until the ambulance serve came in in 1990. Then it got busy.”

In 1990, the city fire department and county ambulance service merged, to create Winchester Fire-EMS. Ambulances were stationed at Station 1 and Station 2 on Fulton Road. The change brought more of everything: more vehicles, more emergency calls and more people.

“We’re very busy now, compared to what we did years ago,” she said. “We didn’t have half the vehicles we do now.”

Currently, Hackworth manages the office at Station 1, oversees the payroll for about 80 employees and checking EMS run reports and insurance information before they are sent out for billing, among other things.

Through three and a half decades, a lot of people have passed through the station’s door. Fire-EMS Chief Cathy Rigney is the sixth chief during Hackworth’s tenure, starting with Robert Monroe.

She’s lost count of all the firefighters during those years.

“We were thinking one day about past personnel just to see who we could think of,” she said. “My list has 150.”

There are many, many more to add to that list, she said.

“They still stop by just to see if I’m still here,” she said. She has no plans to retire any time soon.

“I think the most rewarding (thing) is when they go on a call and people come in to thank them,” she said. “I like seeing that. Even if I didn’t do it, if someone down here did, it makes me feel good. My goal every day is to help at least one person. If you look, you can find one person to help. It’s not hard to do.”