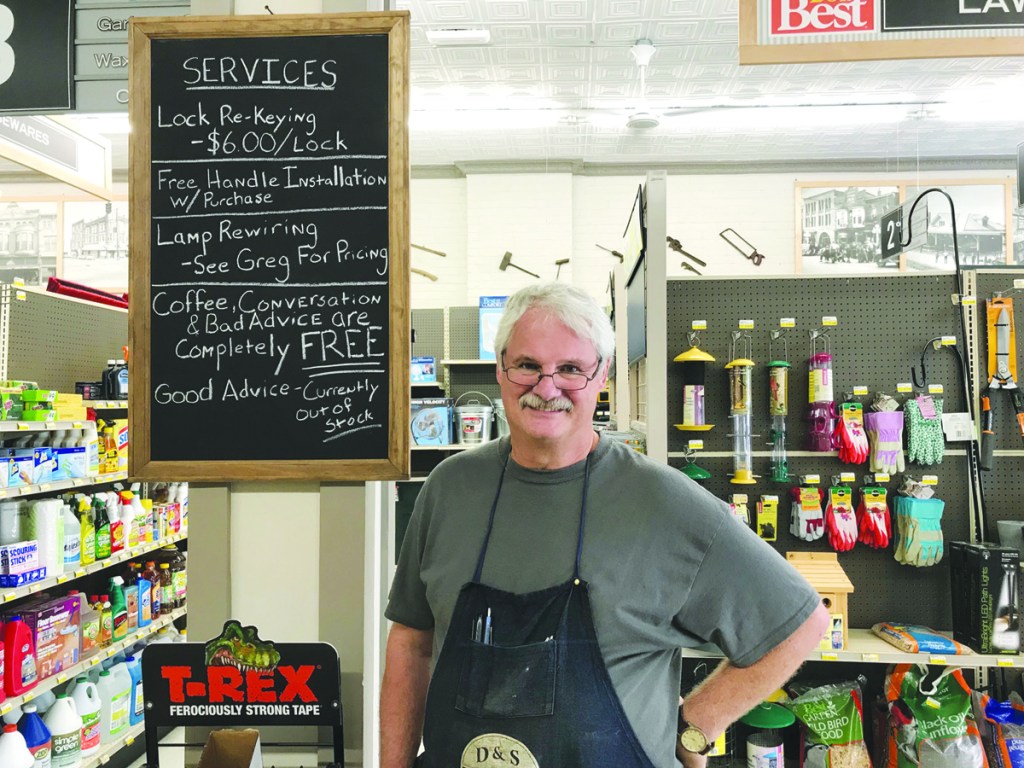 Greg McGuire has worked for D&S Hardware, and previously Bridges and Lane Hardware, in downtown Winchester for 23 years. (Photo by Fred Petke)

Walk into D&S Hardware in downtown Winchester and chances are you’ll meet Winchester native Greg McGuire. He’s been working in hardware for 23 years: the last two for D&S owners Kevin and Lisa Vincent, and 21 in the same location when it was Bridges and Lane Hardware.

Winchester Sun: How did you get into the hardware business?

Greg McGuire: “I had kind of retired from one job because I’d been there for 23 years. I was ready for a break. Actually, Little Bill Bridges worked at Long John Silvers with me and Louis Adams, who was here at that time, worked at Long John’s and Gary Adams worked here. I knew them all. When I was ready for a break from that, I decided to try the hardware business. I’ve always been pretty good with my hands and worked with a lot of different tools. My dad was always good with tools, and my grandfather. Hardware stores came natural on that behalf. Working in the restaurant business for 23 years, I was used to being around the public and working with the public. I’m a people person. I like meeting people, talking to people and meeting people. With this kind of job, it goes along with the turf. I might talk too much, I don’t know. Big Bill Bridges was a talker. Little Bill was more of a business person and Big Bill was more of a people person.”

WS: What is the appeal of the old-style hardware store?

GM: “You go in other stores and its kind of hard to get people to explain things to you. You go in, you get what you want and you come out. At a regular hardware store, you can not only buy it but explain a lot of things to (people). They might have it in their hand and might not know exactly know how to install it even though they took the other one out. They’ll ask you questions and stuff. We’re a little more hands on with people. We take time to explain some things to them, and get to know them. You just never know what the problem might be.

“A lot of the older folks will have problems with stuff. They might just pack it in and say, ‘I can’t get this to work.’ We’ll take a little time to help them and work on it a little bit.”

“We see different generations. We’ve seen kids come in with their parents, and now they’re the ones coming in with their kids to get stuff to work on their homes. You still have houses with the same needs and the same problems.”

WS: What was it like when Bridges and Lane closed and there was a gap before D&S opened?

GM: “I had met (D&S owner Kevin Vincent). I don think I had met Lisa (Vincent), but I had met Kevin before. Before we closed, He had already said he wanted to buy the business if he could, and if he bought the business he wanted us to stay on. I already had a little security going in. It’s not like working all those years and realizing I might be going to something new that I wasn’t used to. It was great for me and Sam Woosley to be able to come back. We had discounts and sold everything out and everything that was left, they auctioned. The guy that did the auction hired us to help move the stuff when people bought it. We stayed busy there. After that, we had about two months layover before Kevin getting it so we could start working in the store. I never had been on unemployment in my life. I went on it for two months and never want to be on it again if I can help it. It was nice to have some money coming in for a while, but nothing like having a job. Kevin gave us a date to show up and we started clearing out shelves and cleaning things up. It was enjoyable getting in the old store with a clean slate.”

“This old building has a history in itself. Back in the 1800s, this was a carriage company that made carriages to go down the road. We still have a working freight elevator. There’s not a lot of those old elevators still working. We have some photos from when this was a tack shop, and we still have people who come in and remember it as a tack shop. If you went to work for a new place, you don’t have that history.”

“Just working with people, trying to have what they need and being able to work out problems that they have. We don’t like not having something. They used to say, ‘If you can’t find it nowhere else, you can find it here.’ Sometimes, that meant they would go everywhere else before they came here because they just came here to get the hard-to-get things. We hope we’ve got what people need all the time, not just when it’s hard-to-get things, just your normal stuff like commode seats, flapper or nails and screws. We’re just one of those stores. We have high hopes for downtown. We’ve got more going on in downtown than we’ve had in a lot of years. A lot of good things.