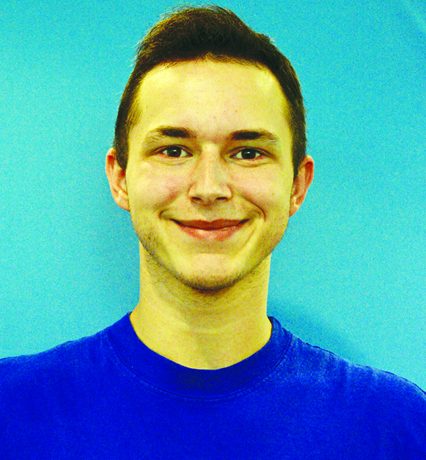 Jimmy Rutherford, 20, is attending Bluegrass Community and Technical College to complete is general education requirements before transferring to the University of Kentucky where he plans to major in education and theater. Photo by Lashana Harney)

Jimmy Rutherford is on a mission to make his life the best it can be.

One of the first steps, he said, is continuing his education.

Rutherford, 20, is in his first year as a student at Bluegrass Community and Technical College. He started classes a few weeks ago at the Winchester campus and is adjusting quickly to college life.

He’s taking a couple of English classes as well as a “first-year experience” class to help him get off to a good start.

He has been busy juggling his classes alongside acting in community theater productions. His latest role was Neleus in “Mary Poppins” at Leeds Center for the Arts. He will also be working with local students in the upcoming “Aladdin Jr.” production to premiere at Leeds later this year.

Rutherford also coaches students at Thoroughbred Gymnastics and has a secret passion for video games.

Rutherford said he dreams of teaching theater to high school students and giving them the same joy and creative outlet he had.

After all, theater changed his life.

“Theater has been there for my life,” he said. “And what I want to do is I want to give kids what I never had. So I didn’t have a good childhood growing up. But theater has always been there. So when I was in a rough situation at home, I would go to rehearsal and forget about everything because rehearsal is where I could just be myself and not have to worry about if I’m going to go to school the next day, or if I’m gonna have dinner that night.”

Rutherford said he hopes to show students theater can do that for them, too. It’s a place where anyone can find family and friends and have a safe space to be themselves.

Rutherford was in middle school when he first had the opportunity to pursue theater. He acted in his first play and fell in love with the art.

That’s also when he met Tracey Miller, president at Leeds, who Rutherford said is his “guardian angel.”

“Tracey Miller has changed my life in phenomenal ways,” he said.

Miller helped him choose colleges and set him on the path of continuing his education.

He decided on BCTC because of its affordability, proximity to home and smaller classes.

If it weren’t for higher education, Rutherford said his life would be at a standstill.

“When I lived in Lexington, I lived with my grandmother and seeing the way that my parents were made me not want to follow in their footsteps,” he said. “So I wanted to be better. I didn’t want people to say, ‘oh, you’re just going to turn out like your family.’ I want to be known as myself, and not as my last name.”

Rutherford said he is thankful to have such a good support system now. He said he hopes to set an example for other youth who may have had similar childhood experiences.