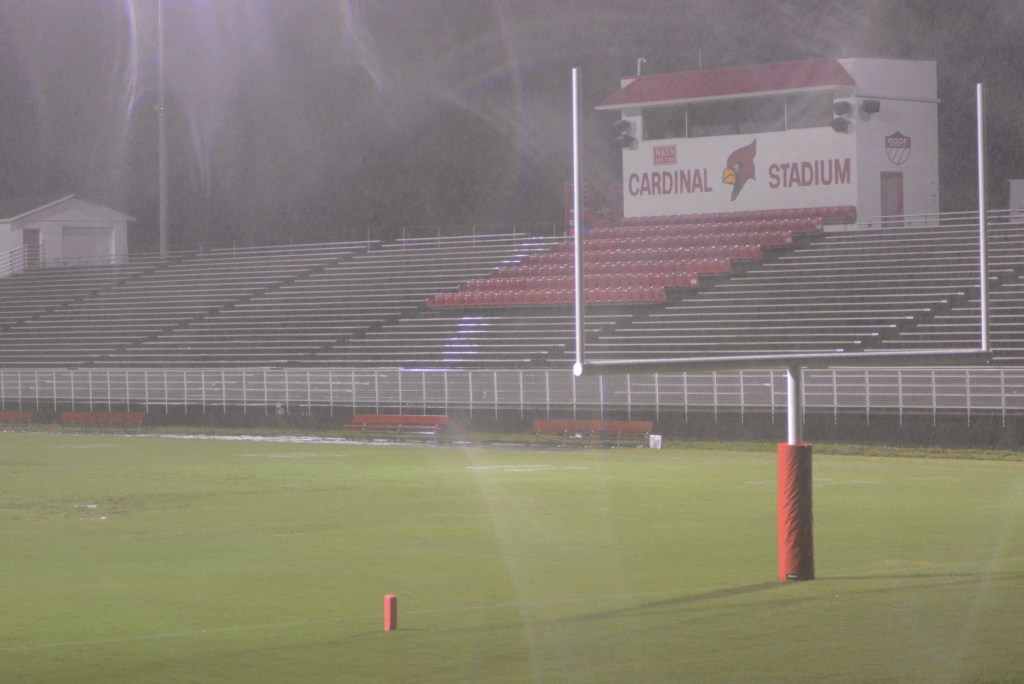 The fans at Cardinal stadium quickly evacuated after nonstop lightning strikes caused kickoff to be delayed, which eventually caused cancellation of the game. GRC was looking to have its season opener against Paul Laurence Dunbar Friday and it is now rescheduled for 11 a.m. Saturday morning. (Photo by Micah Satterly)

Weather got the best of Winchester Friday, which led to the cancellation of George Rogers Clark’s football game. The Cardinals, 1-1 on the season, planned to have their home opener against Dunbar Friday until two lightning delays eventually caused the game to be rescheduled for 11 a.m. Saturday.

Head coach Oliver Lucas admits he was relieved the game was rescheduled.

“We would not have been able to play until 11 tonight because of the lightning,” he said. “It is still lightning now around 9:30 and we were supposed to play at 7:30.”

Lucas said waiting around for the unknown causes the risk for a sloppy game to take place.

“We would have probably started off a little flat,” he said.”Sitting around would not have done either team any good and we would have lost our edge. With that in mind, it gives us a chance to regroup.”

Lucas said it does not make any difference to him and his team what day a game is played on.

He has faith they will take care of business on any day of the week.

“Our role is that we will play anywhere and everywhere,” he said. “So, our kids have the mindset that it does not matter and we have still got to strap up and play. Excitement comes from playing and knowing you have a chance to win.”

Lucas said GRC’s defense will be the key to getting a victory.

“Dunbar has talent and speed,” he said. “They will run us to death if we cannot stop the run game It is going to take all we got to beat this team.”

The 0-1 Bulldogs are looking for their first win of the season after falling to Southwestern 28-7 Aug. 24. The Cards’ opened their season with a 41-0 blowout loss against Anderson County on the road. GRC bounced back Aug. 24 with a road win against Harrison County. GRC defeated Dunbar 17-0 on the Bulldogs’ home field last season.