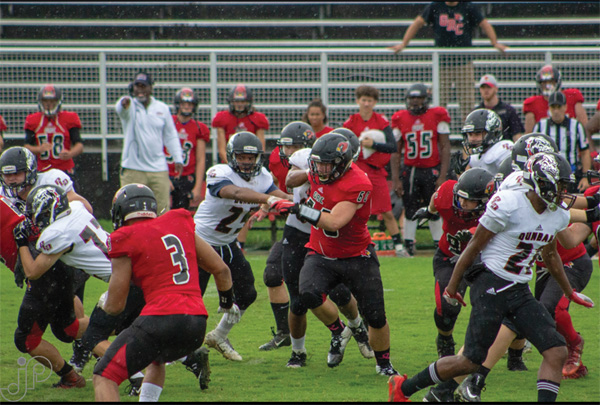 Jehdon Jenkins (3) and Hunter Dunn (60) locate the running back and make the tackle Saturday against Paul Laurence Dunbar. GRC came out victorious 53-0 and will face Montgomery County at home Sept. 7. (Photo by Jon Paul Martin)

George Rogers Clark picked up its second win in a row Saturday against Paul Laurence Dunbar in a crushing 53-0 victory.

The game was originally scheduled for 7:30 p.m. Friday night, but weather delays ran its course to cause the game to be rescheduled for 11 a.m. Saturday.

The 2-1 Cardinals were in complete control of the 0-2 Bulldogs from the opening kick off until the last horn of the fourth quarter.

GRC first gained control of the lead after a 22-yard pass from Will Henry to Dawson Gay at the halfway point of the first quarter.

The Cards quickly added on to the lead after Nitavius Thomas rushed in a touchdown from 3 yards out.

Thomas picked up his second touchdown of the day after another short 4-yard rush less than a minute into the second quarter.

Just 40 seconds later, a PLD fumbled led to a scoop and 30-yard score by Jacob Smith to extend GRC’s lead 21-0.

Another costly turnover from the Bulldogs helped extend GRC’s momentum with a 32-yard touchdown fumble recovery by Thomas Mitchell.

Thomas posted his third rushing touchdown of the game from 23 yards away just above five minutes left in the third.

As if GRC needed a spark to get going, Azariah Israel added a little flare to the game after a huge 50-yard rushing touchdown to give the Bulldogs no hope of a comeback with a 47-0 score.

Zion Israel intercepted a pass in the fourth quarter and ran it back to the end zone for a 30-yard score to put the nail in the coffin.

GRC dominated every category of the game, including 17 first downs to PLD’s 1.

The Cards’ defense held PLD to -41 rushing yards with 28 attempts while GRC posted 307 yards with 42 rushes.

The Bulldogs had no passing yards while the Cards had 62.

Thomas finished with 20 rushes for 135 yards and three touchdowns.

Farris Shakadih caught two passes for 34 yards, Dawson Gay one pass for 22 yards and a touchdown, and Isaiah Noland one pass for nine yards.

GRC will play at home against rival Montgomery County 7:30 p.m. on Sept. 7.

The Indians are currently 2-1 on the season after picking up a 34-14 road win at Harrison County. Montgomery defeated the Cardinals 51-21 last season.