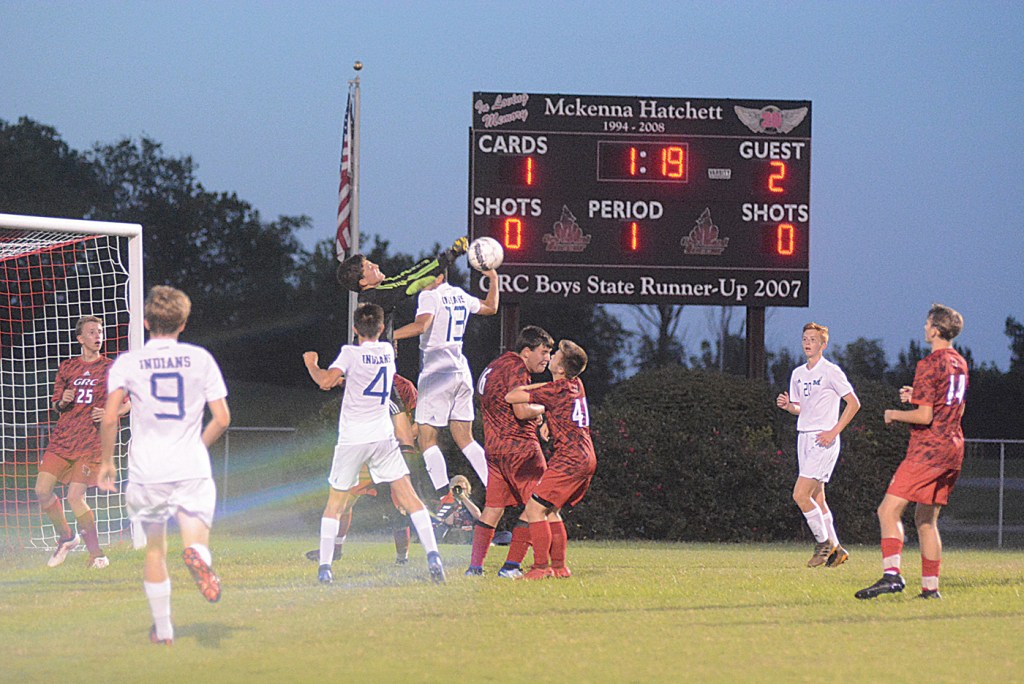 Tayman Hayes punches the ball out of the box after a Montgomery County corner kick. GRC fell to Montgomery 6-2 to give the Cards their first district loss of the season and a record of 1-5-2. (Photo by Micah Satterly)

George Rogers Clark’s slow start eventually caught up to them as they fell to district opponent Montgomery County 6-2.

The Indians had possession of the ball a majority of the first half which helped them achieve two goals within less than a minute for a quick 2-0 lead. GRC marched down the field less than five minutes later to answer after Wade Carrington hit the crossbar with a deep shot and Trevon Curtis found the back of the net from the rebound.

The tables quickly turned in the second half after what seemed to be a solid rivalry match up in the first half. Montgomery lit a fire at halftime and came out hot to score their first goal of the second half within 45 seconds from a penalty kick. Stunningly, the Indians put the ball in the net again to extend their lead 4-1. Just under 30 minutes left to play, Montgomery put dagger in the Cardinals after scoring their fifth goal and coasted from there.

A goal from Dylan Reffett at the 15 minute mark helped give the Cards momentum, but it was too little too late at that point for a comeback.

Junior striker Tyree Brown was not pleased with his team’s performance in an important region and district game.

“Most of the game we did not check to the ball when we should have,” he said. “We expected the ball to get to us and we should not have. Montgomery won possession many times because of that and made us pay for it every time. Plus, we did not shoot the ball when we had chances. You have to shoot and score to win games and we have not been doing that.”

The Cardinals will play two more home games in a row before heading back on the road.

Brown said his team needs to get a spark going for them to have a chance to compete with any team the rest of the season.

“We just have to find a way to shoot,” he said. “Other teams are coming out firing at us and we are not doing the same. We have not been aggressive enough and it showed tonight. It felt like we were asleep. They just wanted to win more than us. We are just not tough.”

The Tuesday loss against Montgomery County has set GRC back with a record of 1-5-2.

Brown said at this point in the season, GRC will have to go even harder for the rest of the season to have a chance at competing for a district title or even competing in the region.

The Cardinals will return home 7:30 p.m. Thursday against Lexington Christian.