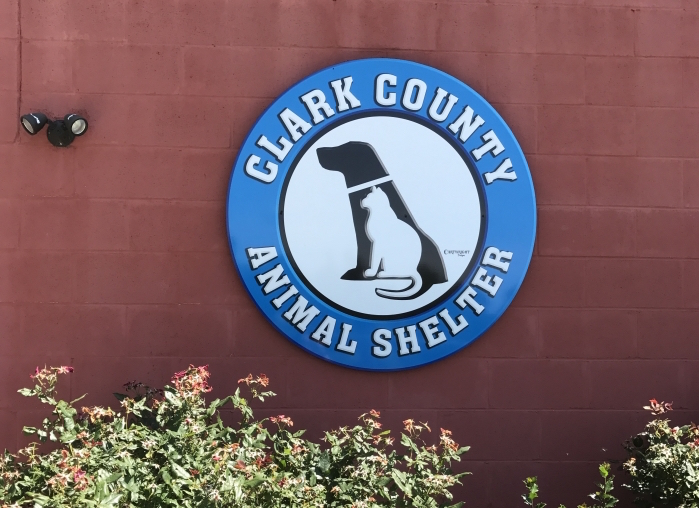 Clark County Animal Shelter Director Adreanna Wills said her office is investigating one of the worst animal negligence cases she has seen in Clark County.

Wills said the shelter received a call Saturday afternoon from a concerned neighbor regarding animals that had been abandoned in a home on Linden Avenue.

At around 4:30 p.m. Saturday, Wills said the shelter removed four dogs and a cat from the home at 140 Linden Ave. She said the animals were all severely emaciated and near death.

“When we responded, we were able to tell who the owner of the animals was based on information we had in the system at the shelter,” Will said. “We called the owner and she came to the property. Initially, she brought one dog out, and based on its condition, we decided to remove it. She let us in the home and we discovered three other dogs and a cat. We removed them and immediately sought veterinary care.”

The neighbor reported a fifth dog as being at the residence, but it has not been located. Wills said she is not sure if the dog was able to escape or was removed from the property prior to the call.

Wills said most of the animals were so severely emaciated and dehydrated they couldn’t walk.

“They couldn’t stand, couldn’t walk,” she said. “They were emaciated and dehydrated. They were living in complete filth, just feces and urine everywhere. It was evident they had been there some time.”

Wills said it is hard to say how long the animals had gone without food, but based on the condition of the home, it had been several weeks since they received regular care and food.

“The utilities in the home had been turned off so there was no air conditioning and no water to the home,” Wills said. “Imagine how hot it has been inside that home. The owner had access to the house but had not been living there. So we aren’t sure if they had been giving them some food here and there or not.”

Wills said animals are scored on a scale of one to nine based on the condition of their body, with one being emaciated and near death and nine being obese. She said a score of four or five is ideal for healthy pets.

“Three of the dogs were scored as ones,” Wills said. “The fourth was scored as a two simply because it was still able to walk some. The cat was a three. Based on microchip records we were able to tell the cat hadn’t been there as long as the dogs.”

The dogs were all mixed breeds, Will said. Two were large breeds, one small breed and another was likely a medium breed but its growth had been stunted by malnutrition.

“It’s likely that dog should have grown to be much larger,” she said.

Will said the animals were also infested with fleas.

“They were anemic from the malnutrition but also because they were literally being eaten alive by the fleas,” she said.

Wills said this weekend’s events played out precisely to ensure the animals were rescued before they died.

“If we hadn’t received the call when we did and if we hadn’t been able to reach the owner through our records, I truly believe we would have been carrying dead animals out of the home within just a day or so,” she said. “Those animals likely wouldn’t have lived through the weekend in those conditions.

“As a whole, this is definitely the worst case of outright animal neglect I’ve ever seen. Definitely.”

Wills said information about the animals’ owner and the case have been turned over to Clark County Attorney Brian Thomas’ offices for charges to be filed. As of Monday afternoon, the owner had not been named and charges were still pending.

The shelter is in need of donations to fund the animals’ veterinary care, Wills said.

“Today they are doing better,” Wills said. “They have a tough road ahead of them. We took them to a vet immediately and after an examination, it was determined their rehab will be all about finding a balance. We are administering fluids, giving small meals regularly, keeping them comfortable and monitoring them regularly. We have had staff at the shelter with them all weekend.”

Donations to the shelter can be made at www.clarkshelter.org or can be mailed to 5000 Ironworks Road, Winchester, KY 40391.