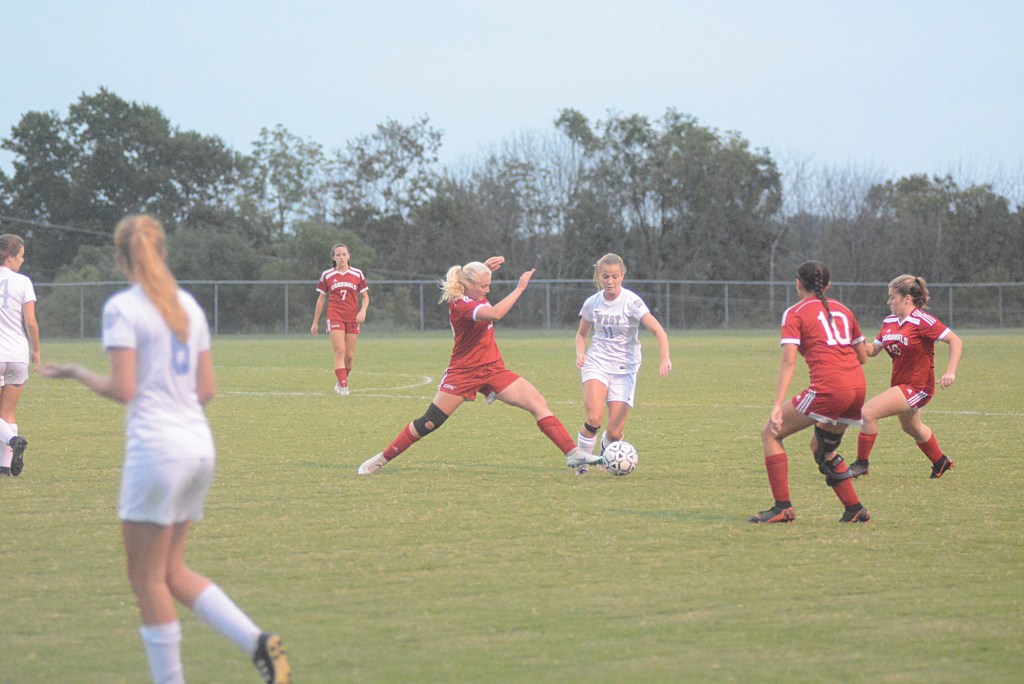 Caitlin Bowling lunges in attempts to steal the ball from a West Jessamine midfielder. (Photo by Micah Satterly)

George Rogers Clark fell 4-0 to West Jessamine Wednesday in a Sweet 16 rematch from last year. West came out victorious in the first round of the Sweet 16 last season beating GRC 3-0.

The Colts are also looking to defend their state title after winning back-to-back state championships.

Neither side could get going in the first half due to solid defense from both sides. West managed to shoot six times to GRC’s two. It seemed as if the lead was in reach for the Colts after a couple firm touch passes around the box, but Brooklyn Johnson made a crowd-roaring save.

A couple minutes later at the 7 minute mark, West finally found the back of the net thanks to more imposing passes.

West took over the second half and extended the lead 2-0 after a free kick out of goalkeeper Brooklyn Johnson’s reach in the top shelf corner of the net.

Less than two minutes later, West put the ball in the net again after a miscommunication from GRC’s defense allowing West to dribble around Johnson for an easy score.

The Colts drained all of the Cardinals’ hopes to score again and seal the game 4-0 with 10 minutes left to play.

Head coach Matt Abner admits West was without a doubt the better team on the field Wednesday.

“They got the best of us tonight,” he said. “We did some things that were uncharacteristic of ourselves, but at the same time they were the better team. We did not put a goal in early in the first half where as they did. They held onto the lead and we were fighting to get back in it. The game is different when you are ahead.

Abner said his tough schedule is preparation to help his team face adversity.

“I thought it was going to be one of those games that would build on our season,” he said. “We wanted to build confidence in playing some of the best teams. We had a number of opportunities that we thought we should have had a goal or maybe even two. We felt pretty good going into halftime after being down 1-0. After halftime, we just did not have the same intensity or focus. Players were not getting back and it was just more of a let down.”

Within the last two weeks, GRC has faced DuPont Manual, current number one team in the state, and the defending champions of West Jessamine who are now on a five game win streak.

Abner said those games have not affected his team’s confidence, but has in fact reassured him that they can compete with any team in the state.

“The great thing is I know as a coach we can play with West at least through the first half,” he said. “In the second half, changes are made both teams try different things. It is just wondering where we go from here and how we get better as a team. We build off this just the same way we build off others losses to move forward.”

“We get through the adversity of playing against good teams so when the postseason comes, nothing will surprise us,” he said. “We will know that we have already fought the hardest fights. Some of the teams we play that have weaker schedules tend to struggle in the region because they have not had those battles. We find a way to win against good teams and we still a number of top 20 teams like Dunbar, Henry Clay, Newport Catholic Central and a couple others. It will do nothing but make us better by the time we get to region.

GRC does not play again until an away game Sept. 12 against district and region rival in Montgomery County.