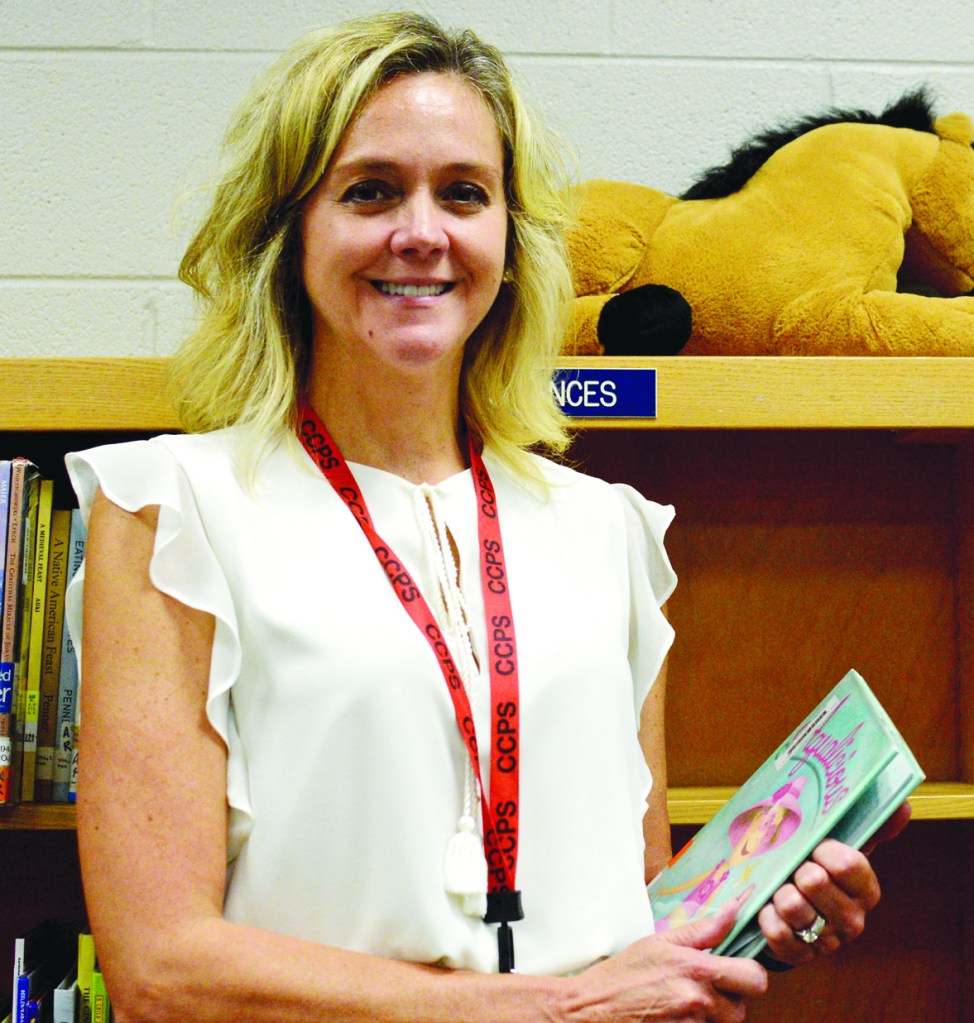 Mary Ann Mandola is going into her 27th year of education. She started off teaching in a classroom and then found her new home in the library in 2004. She has been the Strode Station Elementary School librarian since the district consolidation in 2014. (Photo by Lashana Harney)

Mary Ann Mandola started off teaching second, third and fourth grades. In 2004, though, she found her new home in the library.

Mandola is going into her 27th year in education. She has been the librarian at Strode Station Elementary School since the district’s consolidation in 2014.

Mandola is a Hopkinsville native, but moved to Central Kentucky in 1988 for college. She attended the University of Kentucky and then later went to Eastern Kentucky University for her degree in library science.

Mandola said she enjoys being a librarian because she gets to see students progress in their reading levels.

“It’s neat seeing them when they’re first learning to read to fourth grade checking out the chapter books,” she said. “It’s quite the transformation.”

Mandola said the switch to the library seemed fitting for her because she always had a love for reading. She enjoys books, the characters, the different worlds and so on.

“I just hope I can help instill that love to the students here,” she said.

Mandola said there wasn’t a defining moment for when she decided to go into education.

“I’ve always enjoyed school,” she said. “And I still think back on the teachers I had with such fondness and admiration. It’s not an easy job, but it’s probably one of the most rewarding.”

Mandola said she especially enjoys working with the elementary-age students because their transformation is the greatest as well as their insatiable hunger for learning.

As the librarian, Mandola introduces students to literature and book care. She teaches students how they can use the library as a tool to find information as well as how to navigate the uncountable resources available online. She also manages the school’s website.

Mandola has classes all day in 55-minute blocks, but still finds time to order, process and shelve books.

Though, the change in technology has made some parts a bit easier. When Mandola first started, she had to log books manually in the card catalog. Now, everything is automated.

School libraries also don’t stock as many reference books or encyclopedias anymore as the information is readily accessible on the Internet at the touch of a button.

Mandola said she’s also seen an influx of e-books. However, she still prefers a printed copy.

And the library is no longer bound to its “zero tolerance” policy on noise.

Time restraints can be an issue, Mandola said. But with the time she does have, she always tries to get a book in her students’ hands.

Mandola said she still keeps in touch with students she once had over the course of her career. Former students have invited Mandola to college graduations, weddings and more. Sometimes, they even share book recommendations.

The goal for this year is to get the library back in shape after suffering a significant loss in books and shelving because of flooding.

Mandola said she has a vast support network within her school as well as with other librarians in the district.

Outside of work, Mandola said she enjoys running. She completed her 50th half-marathon this year at 50-years-old, and she plans to run her 51st half-marathon in October.

She also enjoys spending time with her husband, Jason, and their shih tzu. She is proud of her faith in God and said her faith has helped her become who she is today.

Mandola said now that she’s 27 years in, she sees the light at the end of her career tunnel. She plans to retire within the decade and plans to make the most of her final years in the library.

And she hopes the next generation will keep libraries alive and thriving.

“The library is changing,” Mandola said. “But there will always be a need for someone who has that desire to offer a place for information and a place for a love of learning.”