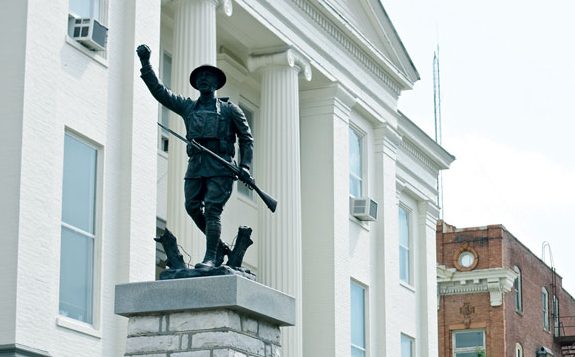 Nov. 11 will mark the end of the four-year commemoration of 100th anniversary of World War I.

Fara Tyree, the chaplain and commemorative events chairman of the Hart Chapter the Kentucky Daughters of the American Revolution, said the chapter is hosting a ceremony and wreath laying at the foot of the World War I “Doughboy monument” to honor the anniversary and the lives lost in WWI.

“We need to remember our history and memorialize the people who gave their lives,” Tyree said.

The Hart Chapter invites all Clark County residents to the Doughboy statue, which is prominently displayed on the corner of Wall Street and Cleveland Avenue, at 12:30 p.m. Oct. 13.

“It has been 100 years since that war,” Tyree said. “… It was the first World War and is often called the Great War. People made huge sacrifices.”

The Daughters of the American Revolution is a service organization that keeps the tenets of historic preservation, education and patriotism at the forefront of their lives, Tyree said.

Mayor Ed Burtner and Clark County Judge-Executive Henry Branham will be present to speak at the event. Tyree said the Hart Chapter is also looking for families of local men who served in WWI. Ancestors can call Tyree at 859-744-7272.

“We’re hoping their families might come forward,” she said. 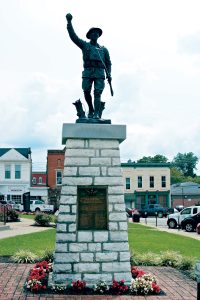 Tyree said the Hart Chapter decided to host the event around the Doughboy statue because of its significance. Doughboy was an informal term for a member of the U.S. Army or Marine Corps, but it was primarily used to refer to members of the American Expeditionary Forces in WWI. There are many doughboy statues across the nation, Tyree said.

Winchester’s pressed copper statue is “dedicated to the memory of those from Clark County who gave their lives in defense of humanity in the World War,” according to its inscription.

Tyree said Zachary McDonald was her great uncle. She said there are likely many descendants of the men who died during the war still living in Clark County.

The monument also names men who lost their lives in World War II, the Korean War and the Vietnam War.

Tyree said she hopes the event will serve as a reflection on the sacrifice these men made during the war, a war which helped to shape the 20th Century.

“It’s an important thing to do, to commemorate the people who gave their lives in defense of our country,” Tyree said.