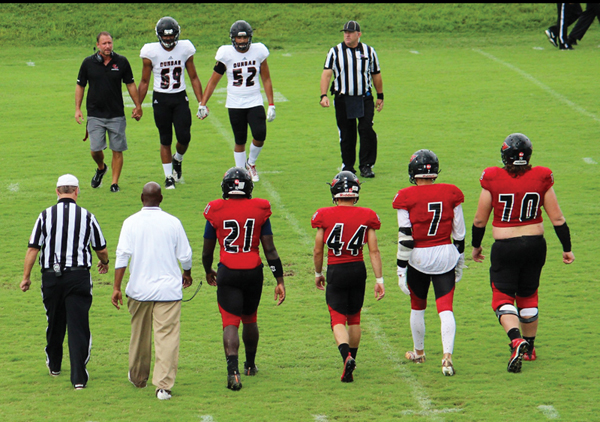 George Rogers Clark is on the hunt for their third win a row as they face rival Montgomery County at home Friday.

Montgomery is currently 2-1 on the season with a road loss to East Jessamine and wins against Breathitt County and Harrison County.

GRC picked up a huge 53-0 victory over Dunbar last week in the Cardinals’ home opener to improve to 2-1.

Clark has not won three games in a row since 2014 where they won the last three regular season games.

The Indians glided past the Cards 51-21 last season and GRC is searching for revenge.

Head coach Oliver Lucas admits it was refreshing to get an easy victory over Dunbar last week and is confident in his team to soar past the Indians.

“It is always a good feeling for us,” he said. “The kids work hard, the coaches work hard and everything came together for us even in the bad weather. We still did our job and the results of doing our is job that we will see success.”

Lucas said he tries not to live in the past and understands to take it one game at a time.

He plans to keep preparation the same for Montgomery as he would any other team.

“You do not try to do anything extra for a rival,” he said. “If you do that, then you are putting too much emphasis on that game. You have to practice hard, play hard, then let the chips fall into place.”

It is no secret about the constant battles GRC and Montgomery has in all sports against each other to fight for superiority.

Lucas said his team does a good job of not letting it to get to their heads and will use all the energy on the field.

“We do not like to talk about the hype,” he said. “We come out here and practice and do things the way you do them. You have to get better and we cannot worry about what they do.”

Lucas said he has been exceptionally pleased with the turnout his team has had at this point in the season compared to the season opener against Anderson County, in which the Cardinals took a crushing blow.

“We have came so far in just a couple of weeks,” he said. “There has been many improvements. I think the kids really understand what we are trying to get done on both sides of the ball. Our discipline is better right now and that is what makes the difference.”

Lucas said the season is already flying by as the halfway point is in two weeks.

He has already seen the growth from his team in his second season as coach than he did when he took over a couple games into the season last year.

“We are stronger this year,” he said. “We are in better shape as well. You can go the distance when you have those two things. We have the four S’s with size, speed, strength and smarts. I like to thing that we have all four going for us right now.”

Kick off will be at 7:30 p.m. Friday at Cardinal Stadium.