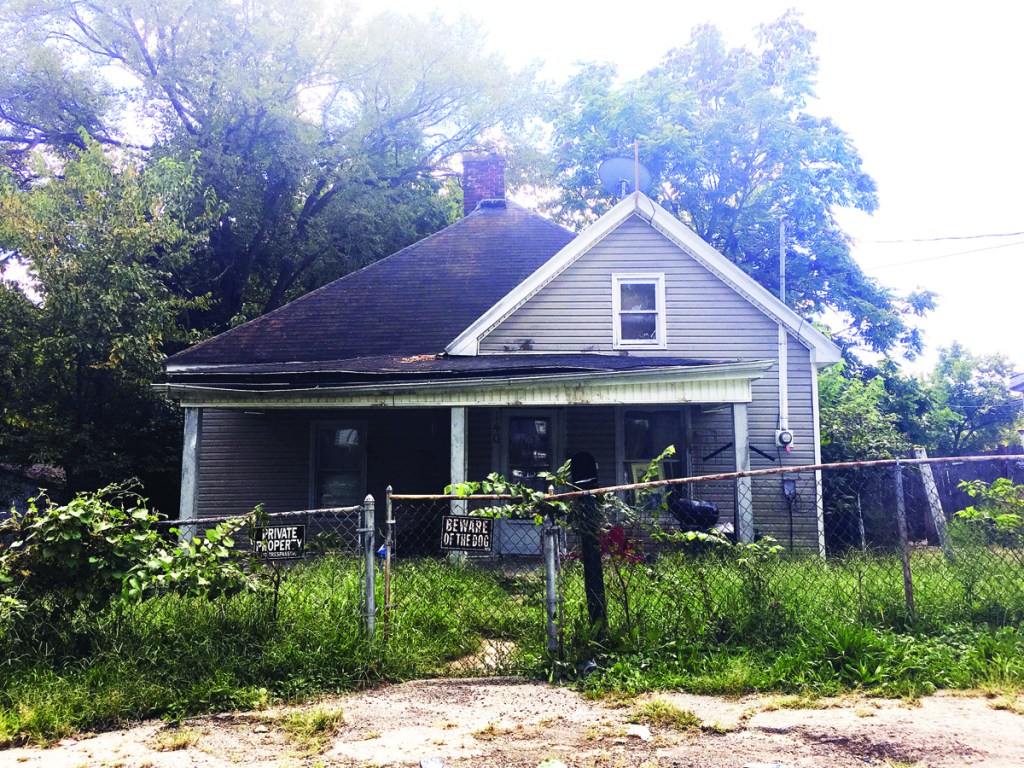 Four dogs and a cat that were each severely emaciated, dehydrated and infested with fleas were removed from the home at 140 Linden Ave. over the weekend. (Photo by Whitney Leggett)

A Winchester couple has been charged in connection with what is being called the worst case of animal neglect seen in Clark County.

Holly Lankford Brandenburg and Phillip Scott Brandenburg Jr., both of 250 Oxford Drive Apt. 64, have been charged with five counts each of second-degree cruelty to animals. In a phone call to The Sun, Scott Brandenburg’s mother said the address listed on the complaint is hers and neither of the defendants is living there or staying there.

The couple has not yet been arrested on the charges.

According to the criminal complaint filed in Clark County Attorney Brian Thomas’ office, Clark County Animal Shelter Director Adreanna Wills said she responded to the home at 140 Linden Ave. around 1:30 p.m. Sept. 1 after complaints from a neighbor that animals had been abandoned there.

Wills said in the complaint shelter employees found four dogs and a cat “in terrible condition, emaciated with discharge coming from their eyes and nose.”

“One dog was standing,” the complaint states, “but the (others) did not appear to be able to stand. The feline was locked in a small 24-inch crate with no food or water.”

Wills said the neighbor left a voicemail on the shelter’s answering machine stating at least two dogs were abandoned in the home.

“They did say the residents had stopped living there weeks ago and only came to get the mail but rarely went into the house and they believed the utilities were off,” Wills wrote.

Wills told The Sun previously the animals were severely malnourished and near death.

She said Holly Brandenburg met her at the home and brought one dog out that was barely able to stand. Wills wrote in the criminal complaint Brandenburg told her that was the only dog on the property and alleged it had been sick for approximately two weeks and lost weight rapidly, but she could not afford to take it to the veterinarian.

Wills said Brandenburg let her into the home, and “the smell of urine and feces was immediately overwhelming once she opened the door. There was garbage everywhere. The floor was covered in feces and urine.”

There were three additional dogs found in a small bathroom and a cat locked in a cage.

“The bathroom, although disgusting, did not appear to have fresh urine/feces on the floor like the rest of the house so I believe that Ms. Brandenburg had just moved the dogs into the bathroom,” Wills wrote. “There was a room at the back of the house that appeared to have been where the dogs were locked for some time. The windows had boards covering them and the floor was covered in feces. One of the doors appeared to be scratched/chewed until the dogs could get out into the rest of the house.”

Wills said she could not make contact with Scott Brandenburg on the date of the incident.

Second-degree cruelty to animals is a class A misdemeanor and is punishable by up to 12 months in jail.

Previously, Wills told The Sun the case was “the worst case of outright animal neglect” she had ever seen.

She said Friday the animals are being monitored closely and are being fed small quantities of food every two to three hours. Fluids are being given subcutaneously to rehydrate and maintain hydration.

“They require almost constant care and monitoring at this stage,” she said in an email Friday. “Initially, we were force feeding the dogs because they were so weak but they have all responded well and are eating on their own now. The rehabilitation process is a roller coaster of ups and downs as each animal’s needs are different. One of the dogs is still struggling more than we would like to see at this point but we are hopeful we will find the cause and get her on the right path. The cat is doing very well. We are thrilled with her response to treatment.”

Wills said the shelter has received a lot of positive feedback from the community, including inquiries about adopting the animals. But she said they have a long road ahead of them.

“It will be some time before these animals are ready to move on to new homes,” she wrote. “We appreciate all the support and donations and are still seeking additional donations to assist in covering the cost of treatment.”

Donations can be made online at www.clarkshelter.org or by mail to Clark County Animal Shelter, 5000 Ironworks Road, Winchester, KY 40391.