Montgomery comes out on top at Cardinal Stadium 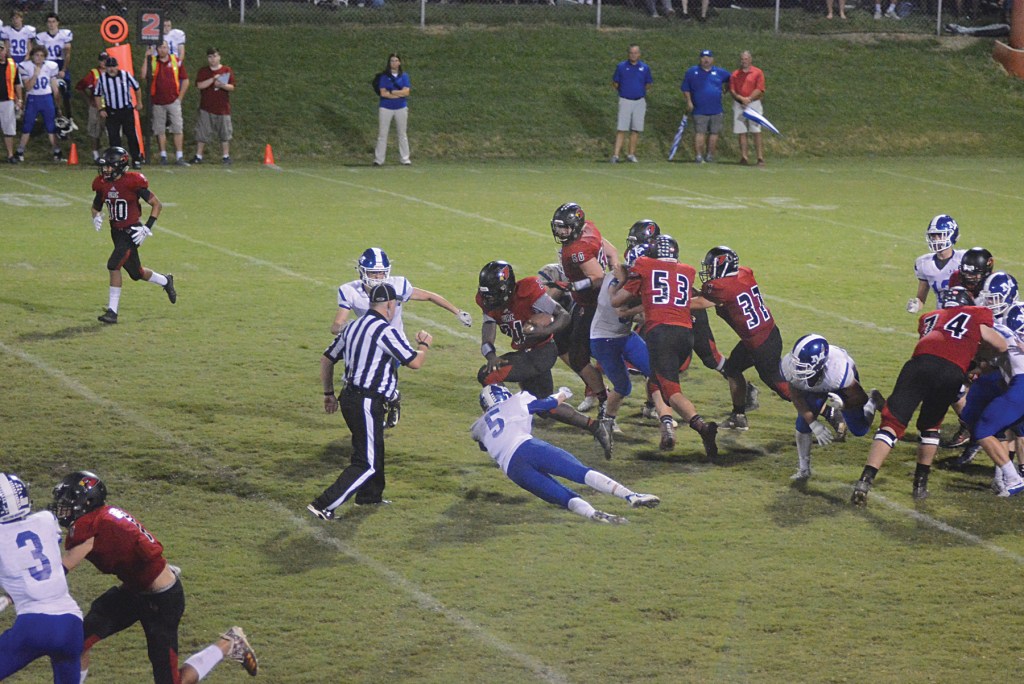 Nitavius Thomas breaks a tackle Friday in a 31-28 loss to Montgomery County. (Photo by Micah Satterly)

Arguably the most anticipated game of the season between Montgomery County and George Rogers Clark took place Friday at Cardinal Stadium. Montgomery came out victorious 31-28 in a game that was down to the wire since the opening kick off.

GRC quickly stunned Montgomery as they completed a 58-yard pass from Will Henry to Dawson Gay the first play of the game to bring the Cardinals within just a couple yards of the end zone.

Nitavius Thomas converted a six yard run the next play to help give the Cardinals an early 7-0 lead.

After an empty possession from the Cardinals, the Indians took advantage and a 14 yard pass in the end zone to give Montgomery its first lead of the game 14-7.

After driving the length of the field with just seconds to spare in the first quarter, Thomas turned the jets on for a 28 yard touchdown to once again even the score.

Montgomery came out in the third quarter looking for revenge and emerged another 60-yard touchdown run to strike first in the second of half to give them a 28-21 lead.

Thomas exploded for a 61 yard touchdown run in GRC’s first possession of the second half to even the score for the fourth time.

Neither side could get things going in the fourth quarter until a Montgomery field goal put the Indians up 31-28 with seven minutes left and GRC could not manage to even the score this time.

GRC has now lost to Montgomery for the second straight year and is now 2-2 on the season as the Indians improve to 3-1.

“I thought we performed well overall,” he said. “We did not stick to our assignments that we had originally planned. There were a few plays where they kept throwing it to the tight end and our safeties did not cover well. We played well on offense and we kept moving the ball. On defense, we kept letting them run the ball up the middle and throw those passes on us.”

The Cardinals’ two-game winning streak came to an end in hopes of extending it to three, which would have been the longest win streak since 2014.

Smith said his team will have to pick up the slack next week to bounce back.

“We are going to have to try better,” he said. “We have got to go to practice and try harder. We need to have good practices and then come out and try to do the same thing.”

Smith is not going to allow this loss get to his team’s head and is still determined to make this season the best GRC has had in years.

“We are not going to let this loss tonight affect how we play in the next game or the game after that,” he said. “We are still going to win the district and I feel good about it.”

The Cards will head on the road next Friday, Sept. 14 to take on the Braves of Grant County.