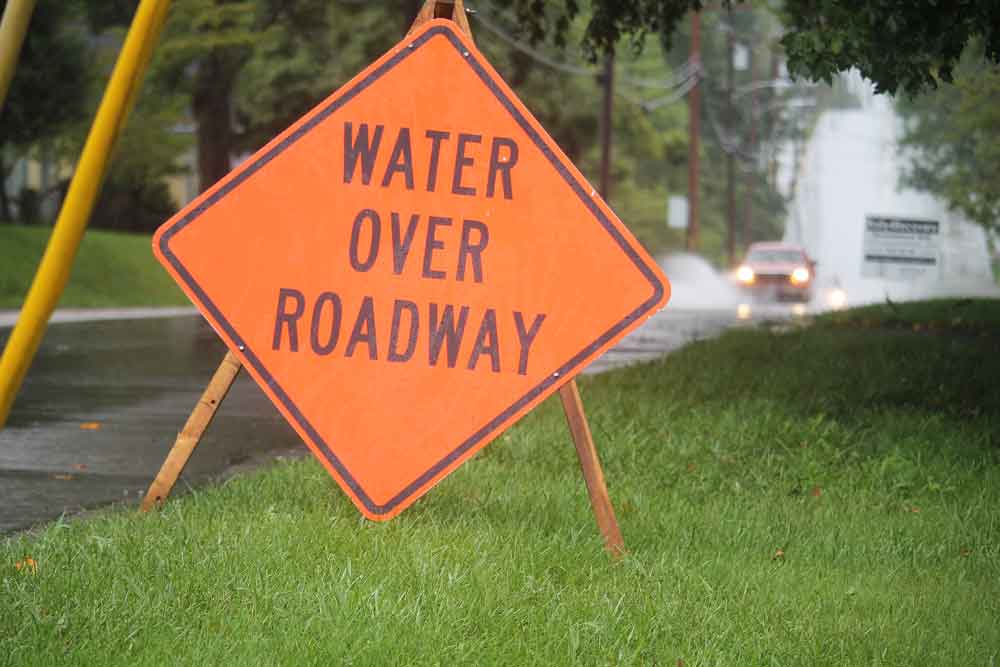 A road sign on Boone Avenue warns motorists of water on the roadway. According to the CDC, just six inches of water running over a roadway could be dangerous. (Photo by Whitney Leggett)

As heavy rainfall continues, officials are warning residents and motorists to use caution.

According to the National Weather Service, a flash flood warning is in effect for Clark County until 8 p.m. Sunday.

Winchester Emergency Management/CSEPP Director Gary Epperson said many areas of the county have been experiencing flash flooding throughout the day Sunday.

“Overall rainfall amounts today will be much lower than Saturday,” the NWS warning reads. “However Saturday’s rains have saturated a lot of the ground over north-central Kentucky. As a result, it will not take as much rainfall today to cause flooding.

“Rapid rises on creeks and small streams will be possible following the heaviest rainfall.”

“As we get more and more rain, we’re seeing a lot of flash flooding,” Epperson said in a phone interview Sunday. “The thing is, when it stops raining, it will go down as quickly as it goes up.”

Epperson said while many roads in the county have standing water, he is not aware of any damage that might cause road closures after the flooding recedes.

“We did have reports of a couple cars hung up (in water),” he said. “There’s flooding in multiple areas and people are likely seeing flooding in their homes.”

Epperson said his department will also be closely monitoring the Kentucky River, especially if the rain continues throughout the week.

“This heavy rainfall will result in more excessive runoff and flooding,” according to a NWS warning. “Some locations that will experience flooding include Winchester, Goffs Corner, Constant Station, Renick, Lyndale, Jackson Ferry, Mina, Tebbs, Judianne Estates and Locust Grove.”

Epperson said when flooding occurs, it is important for motorists to be careful.

“If you don’t see the road, don’t cross,” Epperson said. “If there is standing water, you can’t see the road beneath. Especially when the waters are muddy from erosion, you can’t know what you’re driving into. You don’t know if the road is washed away.”

Epperson said water moving over a roadway can also be dangerous.

“It takes very little moving water to sweep a vehicle away,” he said.

According to the Centers for Disease Control, “as little as six inches of water can cause you to lose control of your vehicle.”

Epperson warned that residents should seek shelter on high ground if water begins to rise into their homes.

The NWS predicts rain will continue throughout the evening and thunderstorms are expected before 8 p.m. followed by scattered showers.

Rain is in the forecast again for early Monday with showers expected before 2 p.m. Clearer weather is anticipated for Monday evening and Tuesday with rain returning Wednesday.