DRYING OUT, CLEANING UP: Post Office repairs to take at least 90 days 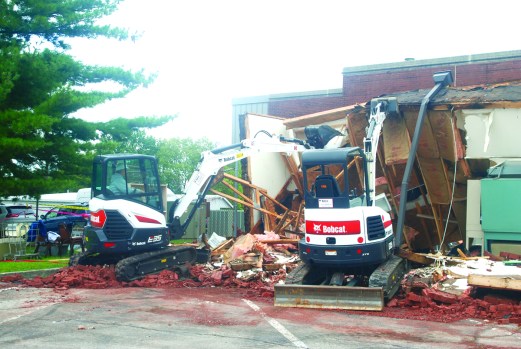 After several mail cases were removed, workers pulled down the first section of the collapsed roof at the Winchester post office Monday morning. Postal officials said it would be at least 90 days before repairs are complete. (Photo by Fred Petke) 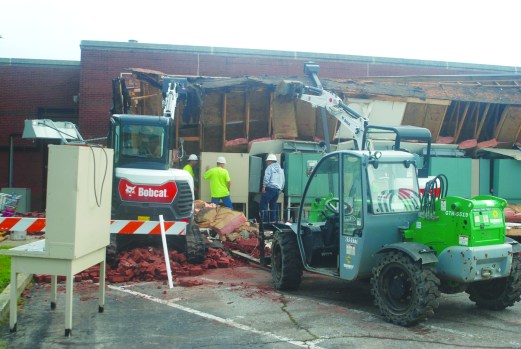 A pair of excavators hold up the roof over a collapsed sectin of the Winchester post office Monday morning. Workers were removing cases of mail whil ebeginning to clean up the site after a roof collapsed Sunday morning. (Photo by Fred Petke) 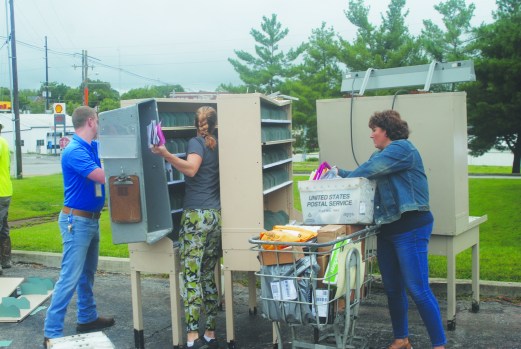 Postal workers remove mail from cases after they were removed from the collapsed section of the Winchester post office Monday morning. An addition used by rural route carriers collapsed during heavy rain Sunday morning. No one was injured (Photo by Fred Petke)

Rain may not stay mail carriers from their appointed rounds, but it certainly can be a stumbling block after part of Winchester’s post office collapsed Sunday morning.

Postal workers said they were inside when they heard a loud noise around 10 a.m.

“This morning we were sending the carriers out and out of nowhere, everything started falling,” postal worker Cassie Simones said Sunday morning. “When it first started, we thought a vehicle hit the building. When we went out to check, we immediately went in and started picking up parcels. The roof collapsed and water started rushing in.”

The collapse affected the rural route sorting area, which appeared to be an addition on the Washington Street side of the post office. Bricks were scattered through the parking lot, and crates of mail inside were exposed to the pouring rain.

“Thank goodness no one was in there,” Simones said. “We usually have 12 rural routes in there. We’re very fortunate everyone was out.”

Monday morning, crews were at work removing mail cases which stored held mail in the extension of the post office. US Postal Service human resources manager Mark Hulme said some carriers were sorting mail on the back dock of the main post office, but deliveries were continuing as normal.

“Everything came in on time,” Hulme said. “We’re processing everything on time. We’re getting it out on time.”

Hulme said engineers were on site Sunday looking over the damage and starting to plan for repairs. Hulme said repairs would take at least 90 days.

As crews removed cases of sorted mail Monday morning, postal workers quickly pulled the mail and moved it inside for inspection and delivery.

Postal workers were allowed back in part of the post office Sunday morning after the main structure was deemed structurally safe by the city’s building inspector Randy Whisman.

“He assured me certain areas of the building were safe to be in,” Winchester Fire-EMS Battalion Chief Chris Whiteley said Sunday. “So we decided to let the employees back into certain areas. We taped off the areas we deemed hazardous.

“The main building’s flooded but appears to be structurally sound.”

Whiteley said firefighters used the department’s ladder truck to check the rest of the roof and it appeared to be draining properly. Most of the water inside the post office likely came from the roof over the addition.

The heavy rain overnight and through Sunday morning was likely one of the main factors in the collapse.

“I’d venture to say it’s weather-related, but I’m not a structural engineer,” he said. “There could be secondary issues, but weather appears to be the primary cause.”

Hulme confirmed the cause.

“With the flat roof, it was holding too much water and it just came down,” he said.