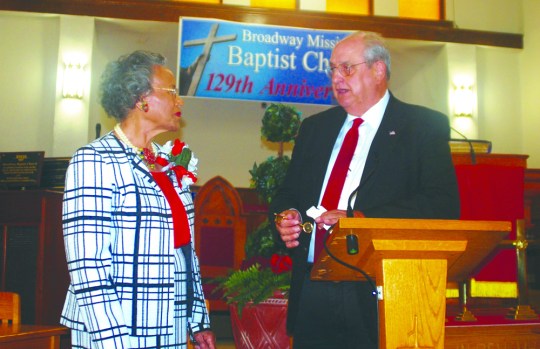 Winchester Mayor Ed Burtner, right, presents Oliver School teacher Esther Howard Noland with a key to the city Saturday during a recognition of the school's teachers. (Photo by Fred Petke) 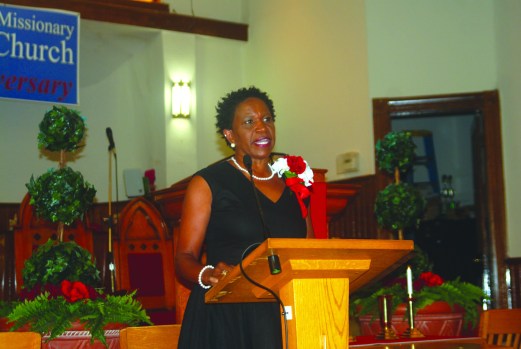 Former students and the community gathered Saturday to celebrate the teachers of Winchester’s Oliver School.

“I was blessed to be educated at Oliver School from first grade through sixth grade,” former Clark County Public Schools superintendent Elaine Farris said. “Most of all, I appreciate the quality education I received. Oliver School’s 47-plus dedicated teachers poured their lives into thousands of Winchester’s children.”

The school, which still stands on Oliver Street, served Winchester’s African American community for nearly eight decades. After opening in 1892, it served all grades until the high schools integrated in 1957. Oliver continued as an elementary school until 1969, when it closed for good.

Noland, now 85, graduated from Oliver School and taught there, as well as at schools in Middlesboro and Lexington.

“Teaching has been my life’s work,” Noland said. “I hope my teaching has made a difference in my students’ lives and our community, our state and our nation.”

Many who spoke during the event spoke fondly of both.

“Mrs. Noland, than you for your time at Oliver School and for teaching me phonics,” Farris said. “I can still sound out those mul-ti-syll-a-bic words.”

Black, who passed away in June and pastored a number of churches, knew of the plans to recognize Oliver School and its educators, his daughters said.

“He was so proud of the students,” his daughter Bonita Black said. “He really instilled in me a love to learn.”

“My father would be so happy to see all your faces,” daughter Cathy Black said. “He dedicated his life to helping others and made appointments with children’s parents. He wanted to help everyone be the best people they could be.

“We can’t thank you enough.”

Noland and Black’s children were also presented with keys to the city by Winchester Mayor Ed Burtner.