GRC searching for bounce back win at Grant County 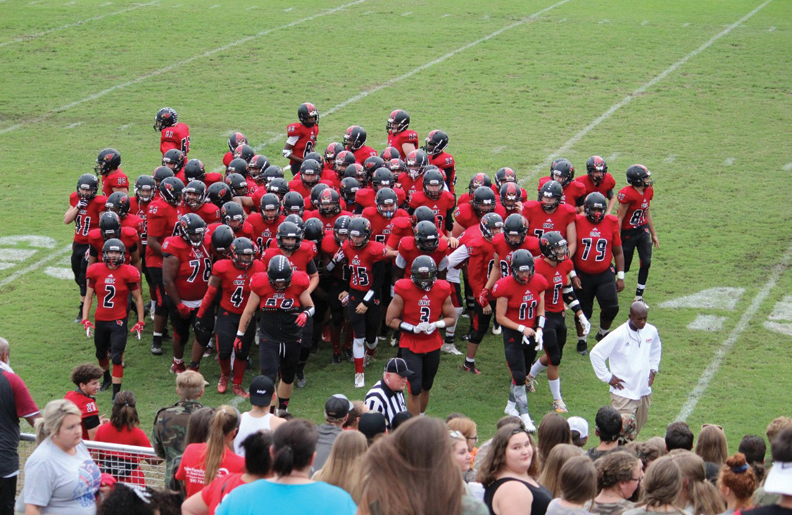 GRC took a tough loss last week against Montgomery County and is eager to play under the Friday night lights against Grant County this week. (Photo by Deanna Taulbee)

George Rogers Clark has been working this week to get the season back on track after falling 31-28 in a tough battle against Montgomery County last week.

GRC, now 2-2 on the season, was on pace before the loss to win three games in a row which the team has not been able to accomplish since 2014.

Nonetheless, the Cardinals are no longer looking in the review mirror and are instead looking forward to a road trip to Williamstown to face the 1-3 Grant County Braves this Friday.

Senior quarterback Will Henry said the losses such as the one the Cards took last week against the Indians has a different kind of sting to it.

“Every loss is a hard one,” he said. “Especially against rivals. It is more of a mental loss and it is more in our hearts. The good news about a loss against a rival is it makes us want to try harder and come back harder in the next week of practice.”

Henry said it is never easy to bounce back from a loss in a game that was within reach, but the team relies on his leadership to carry over.

“Getting our heads back on straight to focus on the next game has a lot to do with myself and my fellow captains,” he said. “It is on our leadership to get everyone focused and staying mentally prepared for the weeks ahead. One loss from a rival is not going to slow us up for what we want to do with the rest of the year.

Henry said the Cards have been having a good week of practice until Thursday, where he feels like his team is already getting the pregame jitters as they were more lackadaisical than usual.

“So far, this week has been going really good,” he said. “We slacked off a little bit today. We just lost our intensity for a while. Overall, we have been closing up on the little mistakes that we have been having. Our general focus has been way better.”

At almost the halfway point of the season, Henry feels like his team has not lived up to the standards they strived to accomplish during the preseason.

“We are not playing anywhere near how we should be,” he said. “We are playing under par. With our talent that we have we should have not lost the games that we have. With our mental focus, we can still pull it together and close up on certain things that can be fixed.”

Henry said he has faith in his team’s talent, but the mental aspect of the game will have to be in full effect if the Cards want to come home with a win.

“Our mental focus has to be there,” he said. “We just have to do what the coaches tell us to do and trust in their game plan. Our talent is there, we just have to put all the pieces together and play the way the I know we can.”

GRC will head to Williamstown to take on Grant County 7:30 p.m. Friday.