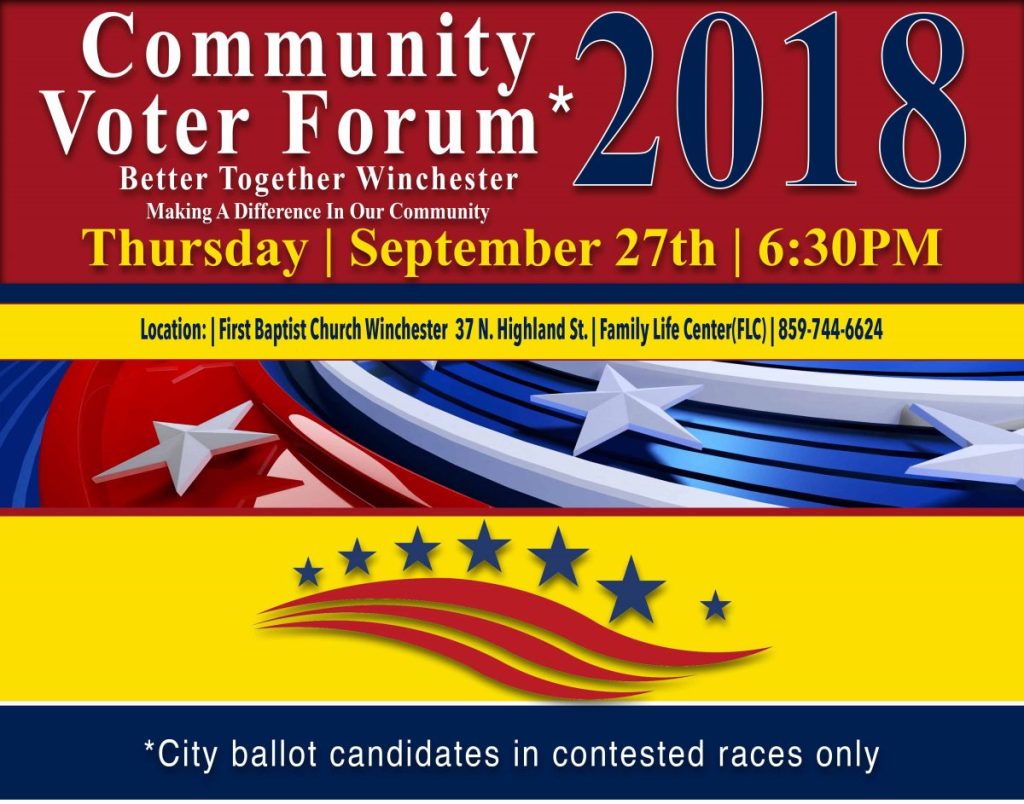 The idea for an upcoming candidates’ forum grew out of a desire to respond to issues of racial divide and unheard voices.

Mary T. Yeiser said a group of individuals formed in April 2017 to address these issues described in the “Waving Our Community’s Flag Report,” which the Harwood Institute for Public Innovation published in 2017 for The Greater Clark Foundation (GCF).

“We’re just ordinary citizens that have seen something — a void — in our community that we wanted to try to fill and change,” Yeiser said.

The group met last year during a multi-day innovators’ workshop hosted by the Harwood Institute.

Innovator Becky Farmer said the those participating in the lab were asked to attach themselves to an issue. Farmer and a few others chose race relations.

Farmer said it was during that time she began learning more about Winchester and Clark County, especially in regards to north-end issues and race relations.

The grassroots group continued convening together after the workshop ended. Their first meeting was in May 2017 where members of Emmanuel Episcopal Church, who had participated in a Lenten Study examining racism, joined.

From there, their passion for improving Winchester only strengthened. The group has been meeting at First Baptist Church Winchester twice a month for more than a year. There, they shared perspectives on various issues in their “safe space.”

Member Mark McCammish said the group started out talking about racism but began to realize it’s also an issue of economic disparity. McCammish, who joined the group from Emmanuel, said he learned two things: First, black folks can’t end racism. Only white folks can do that. Second, the best place to do that is in a faith setting.

“I firmly believe that it should be a primary mission of white churches to actively work to end racism,” he said.

Recently, the group gave itself a name: Better Together Winchester (BTW).

The group also decided it was time to take action.

After the primary election in May, the discussions in BTW meetings were focused more and more on how people on the margins in Winchester were typically not involved in the election process.

Better Together Winchester is hosting its first of many efforts to give marginalized groups a chance to be heard.

Their first event, a candidates’ forum, will empower the community to make informed decisions when it comes time to voice their opinions at the polls in November.

Yeiser said one crucial realization of the group was candidate forums sponsored by other groups in Clark County are held at locations outside marginalized neighborhoods, which are not convenient or welcoming to those populations.

BTW is hoping to change that, she said.

Better Together will host the forum for candidates on the city ballots at 6:30 p.m. Sept. 27 at First Baptist Church Winchester, 37 N. Highland St.

Yeiser said BTW believes everyone’s voice deserves to be heard by those who set the policies that affect the entire community.

Questions will be framed based on the “Waving our Flag” report presented by the Harwood Institute (the report is available at winchestersun.com) as well as input being solicited from the community, Yeiser said.

Better Together has also grown to about 15 to 20 members.

Voter registration tables will be on site during the forum as a way for BTW to help to increase voter participation in the upcoming election, especially in the historically marginalized precincts of Winchester, Innovator Marvin King Jr., pastor at First Baptist Church Winchester, said.

Yeiser said the candidates’ forum would focus primarily on contested races; however, letters were sent to all other candidates on the ballot — uncontested, county-only races and U. S. representative — inviting them to be present and advising their presence would be acknowledged the night of the forum.

All candidates signed a participation agreement and will be given questions ahead of the forum to prepare answers.

According to the participation agreement, candidates must treat fellow candidates and moderators with “civility and respect.” Moderators will not tolerate personal attacks during the forum.

Candidates will each have two minutes to respond to each question and must stay on the topic.

As of publication, 24 candidates have agreed to attend.

Candidates attending the forum include:

— Board of Education District 1: Bill Taulbee

— Board of Education District 4: Judy Hicks

Two school board candidates, Patti Columbia and Sherry Richardson, will not be able to attend the forum because of scheduling conflicts.

King said he’s seen a renewed energy not only within the group to address these issues head on but also in the community as a whole.

“I do think that the candidates’ forum has allowed our mission and our purpose to coalesce together,” King said. “There’s such energy within this group that can see the forward motion and traction to make a difference in our community.”