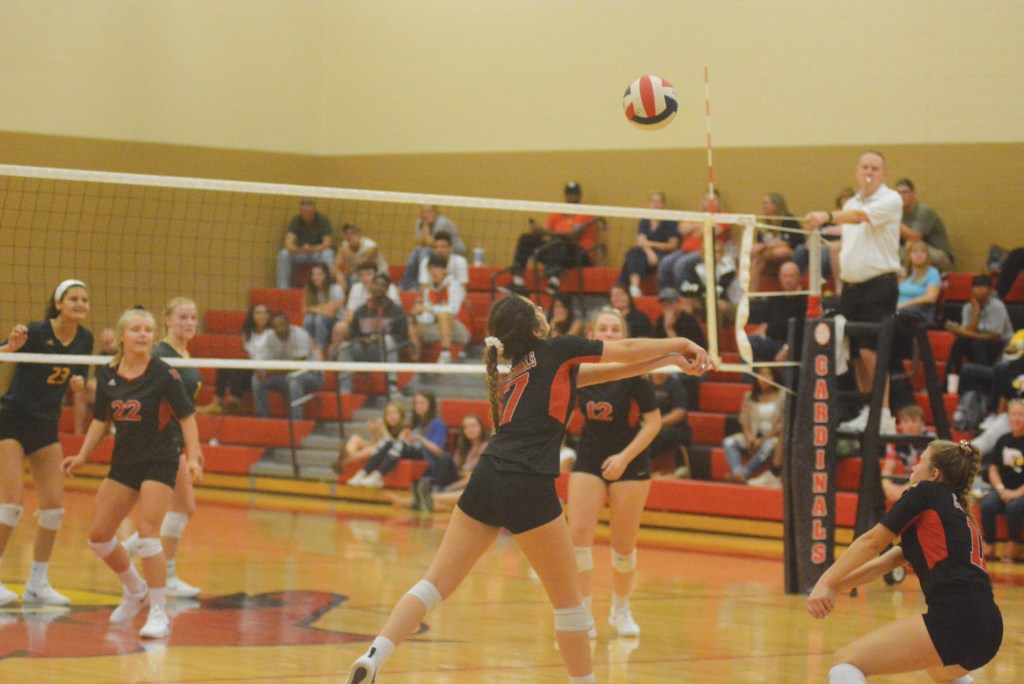 Becca Hutchinson attempts to hit the ball over the net Thursday against Bryan Station. (Photo by Micah Satterly)

George Rogers Clark could not find a way past top-25 ranked Bryan Station as the Lady Defenders left Winchester with a sweep.

The Cardinals are now 5-10 on the season as the Lady Defenders improve to 10-2.

GRC picked up a win Tuesday with a sweep against Bourbon County, but before that match the Cardinals fell in five straight matches against Harrison County, Western Hills, Scott County, Sayre and Madison Southern.

The Cards have had only two home games in the last two weeks.

Head coach Jessica Bryson still found the good in her team regardless of the sweep against Bryan Station.

“I think we had some really good moments,” she said. “We showed that we could definitely compete with them, but maybe not right now. Their program has grown and so has ours. We are still working to learn how to compete and they are still looking for that click. We had some great rallies and were able to put the ball down. We actually finished better this year than we did last year, so overall I think that our playing has improved. Bryan Station is a top-25 team for a reason and we showed that we can compete with them.”

Senior Melanie Manns was more impressed with the performance this year against the Lady Defenders.

“We were much better compared to what happened last year,” she said. “I do not think they expected it which gave us the advantage. We showed them who we are.”

Bryson said her team’s chemistry was off during the five game stretch of losses before the win against Bourbon.

“It was a little bit of an attitude adjustment,” she said. “I do not think it really sat in with them how many teams we actually have to compete against. There are no easy games.  Every time you step on the court, you have to show up to play. The first four or five games we played some tough competitors and we were not really ready to step on the court. They knew how important the Bourbon game was so they showed up and played and showed they are on top of the district.”

Manns admits the competition has been very tough this season.

“We fell those games before Bourbon because they were hard to play against,” she said. “We knew what we were going to deal with against Bourbon County and I feel like we were much more confident against them than we were the other teams. Overall, those losses prepared us for Bourbon.”

The season is now at the halfway mark and Bryson said she has seen the growth in all areas of her players.

“They have definitely matured,” she said. “We went through some rough patches and we have had a couple of epiphanies. They are really maturing into where they will be going through the season. Going into district, I see them honing their skills and finishing as the top-seed like where we are now. We will come together as a team which is what you always want near the end of the season.”

Manns said some losses her team has taken have been hard to swallow.

“We lost a few which was hard to compensate,” she said. “We are finally figuring out our rotations and learning to work together. We are a very small team compared to others.”

GRC will continue to race for the top-seed as they will play four matches at Montgomery County for the Dink Scott Memorial Tournament Saturday.