Where in the world? Edmund Taylor’s merchant mill 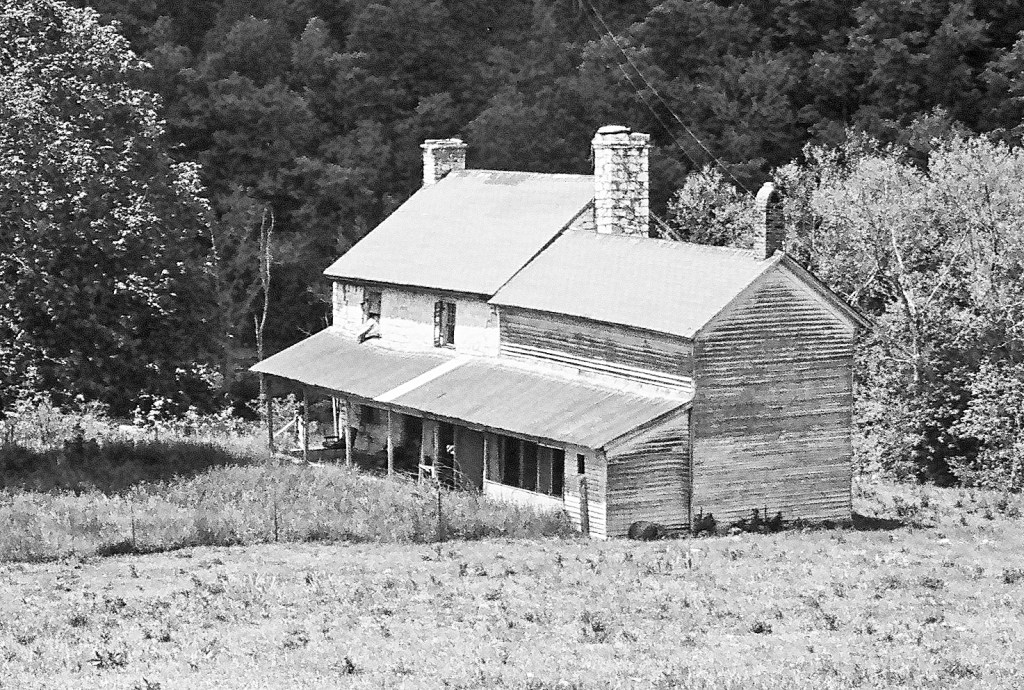 The William Taylor house as it appeared in the 1960s in a photo from the Robert Collins Collection.

Edmund was listed in the 1850 census as a farmer with his wife Mary Ann (Gibson) and four children.

It is uncertain who operated the merchant mill from the time William died until Edmund came of age. Edmund did eventually take over management of the mill and kept it going until his death.

He continued to live in the mansion house. This once fine residence is listed on the National Register as the William Taylor House.

Its present condition is precarious, and the structure cannot long survive unless some effort is made to save it.

Edmund Taylor’s merchant mill was recorded in the 1850 manufacturers census as a water-powered flour mill with $2,500 of capital invested and one hired employee.

John Fletcher, occupation miller, lived with Edmund and must have run the mill for Edmund.

In time, Edmund’s son, William, took over the mill. William never married and lived at home and was an unlikely choice for a miller.

According to Winchester newspaperman Charles Lyddane,  “The miller was Judge Taylor’s oldest son Will, who was virtually blind from birth but who knew every foot of the old mill as he knew his bed room. To the traveler passing in the night the suggestion was rather ghostly to hear the old mill running at full speed in the darkness with no light visible.”

Lyddane’s history confirms the location of Taylor’s merchant mill at the mouth of West Fork. “At the Junction of West Fork and Howard’s Creek is Taylor’s Mill formerly owned by Judge Ed Taylor. It was different in one respect from any other mill we ever knew.”

Lyddane went on to explain the mill was supplied from two mill ponds, one on West Fork and one on Lower Howard’s Creek.

Portions of both mill dams still stand, and part of one stone wall of the mill can be seen today. The “E. Taylor Mill” is listed on the National Register.

The business had a 10-horsepower waterwheel that turned two sets of millstones producing flour, cornmeal and bran valued at $4,840 which was “ground for private owners” (usually an indication that the products of the mill were going into a distillery for the production of whiskey).

“Died, at his home on Lower Howard’s Creek of pneumonia, Judge E. T. Taylor, aged about eighty-five years. He leaves a wife and twelve children several of whom are living in different parts of the West. He came of a family distinguished for mental strength, his half-brothers, Ben, Hubbard and Barbour Kavanaugh, being among the most prominent ministers of the Methodist church in the South, Hubbard being for many years a Bishop. Mr. Taylor was County Judge during the war and was so conscientious that it was said of him that ‘he was so afraid of doing wrong that he did but little of anything.’ Since the war he has been a prominent member of the Republican party and for a while, held a position in the Internal Revenue service.”

He did not leave a will. His entire personal estate was set aside for his widow, China Taylor. This must have been Edmund’s second wife.

China Gibson Taylor died in 1911 and is buried in the Winchester Cemetery.

We have not yet learned the exact year Taylor’s Merchant Mill went out of operation. We can say after being in the family for 117 years, the mill tract finally left the Taylor name in 1914.

In a civil action styled Maggie McMurtry &c vs. Houston Taylor &c, the Clark Circuit Court ordered a public sale of the property referred to as the “Taylor Mill Tract.”

The master commissioner sold the tract to Robert L. Quisenberry for $2,480. After payment of the last installment, a deed was issued to Quisenberry May 2, 1914.