Cardinals clobber Braves on the road 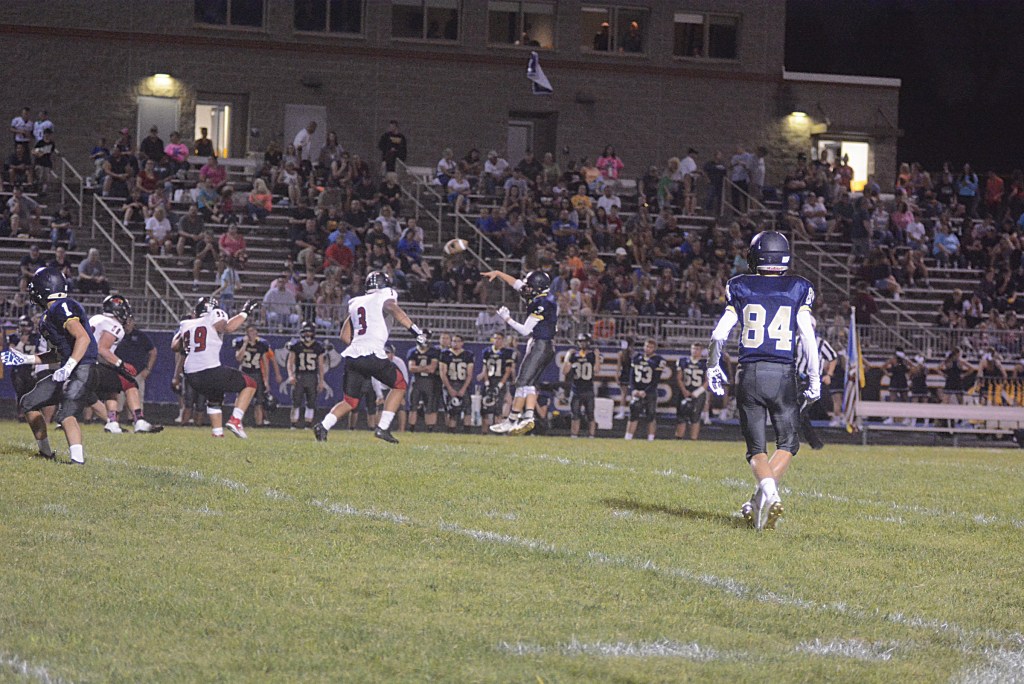 George Rogers Clark journeyed to the outskirts of Kentucky and dismantled the Grant County Braves 55-18.

GRC came out hot from the opening kickoff as Jeremiah Mundy returned it 50 yards to set up the Cardinals for early scoring range.

The first play of the Cardinals’ possession, Nitavius Thomas ran it 30 yards to the end zone to give GRC an early 7-0 lead just 30 seconds in and the PAT was good.

After a long, empty possession from the Braves, GRC stormed back down the length of the field for another touchdown as Thomas earned his second touchdown of the game with just over five minutes left in the first to extend the lead 14-0.

Don Wells set the Cardinals up in good field position before that touchdown with a vigorous reception from a pass that seemed almost out of reach.

On Grant’s next possession, Tye Boyken read the offense perfectly and managed to intercept a pass to give the ball back to the Cardinals.

Grant finally gained momentum with an interception the very next play, which eventually helped them get on the scoreboard later that drive with an 11-yard touchdown pass, but failed to convert the extra point.

With just a couple of ticks left in the first, Thomas was rewarded with his third touchdown with a mind-blowing 85-yard rush to put the Cards ahead 21-6.

Two minutes into the second quarter, Grant County had another answer with a 20-yard touchdown pass to bring the game back to within a possession.

Once again, the Braves failed to convert the extra point.

Another two minutes later, Azariah Israel found the end zone with a one-yard rush to extend the lead back up to two possessions 28-12 after converting the extra point.

With five minutes left in the first half, GRC gained more momentum with a 35-yard reception from Jehdon Jenkins to put the Cardinals back in the red zone.

Will Henry rushed in 15 yards with a quarterback sneak to bring the score to 34-12 and the game was completely in the hands of the Cardinals from there.

The Cards were not done yet as they managed to squeeze another touchdown in before the first half came to a close with a 26-yard reception by Isaiah Noland.

GRC came out in the second half as if the score was tied and ran up the score on their second possession from Israel’s second rushing touchdown of the night from 24-yards out to bring the game to a running clock.

GRC freshman Carter Lowe rushed in another touchdown from one yard out to put the score at 55-12.

Grant managed to put another touchdown on the board with a minute left to play with an 86-yard reception to cut the margin to 55-18 after failing the two-point conversion.

Head coach Oliver Lucas felt like his team was asleep to begin the game, but picked up the slack as the night went on.

“We started out slow,” he said. “In order to be a great team and take the next step forward, we cannot come out sluggish. We have to play. We have to play hard and above the competition. You have to play to make yourself better.”

The Cards will have a well-deserved bye week next next and Lucas said they will use that time to rest and to get back fully healthy.

“We need to get a lot of rest and get well,” he said. “We need to make sure we tighten some things up before we buckle down to get prepared for the rest of the season.”

GRC is now at the halfway point of the season and Lucas has trust in his team to improve to become serious competitors come postseason.

“We have a chance, but everybody has a chance,” he said. “All you have to do is just perform when you are called upon. If we continue to improve and not slop around, we will be fine. I like our chances going into the playoffs and going into district.”

Lucas said during their bye week they will focus on the mental aspect of the game rather than physical to make sure his players get the rest they need.

“We are going to look at making sure we are in better shape,” he said. “Not necessarily being in pads so much during this off week so our kids can heal and come out fresh.”

The Cardinals will take on Boone County Sept. 28 after the bye week and Lucas said he plans to do everything in his power to prepare his team for the journey to Burlington.

“We are going to travel a little different for that game,” he said. “It’s a further a distance, so our boosters put together some charter buses which will be something to help us be a little more relaxed as we go. We are going to practice like we always have and prepare like every game is a playoff.”