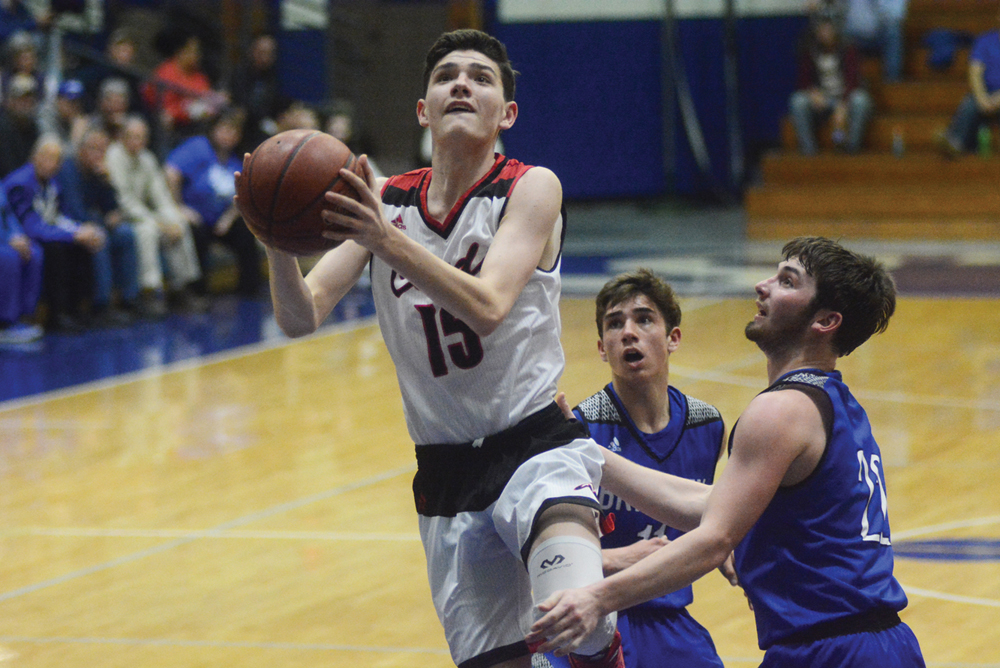 Jared Wellman gets fouled for an and-one in the 10th Region Tournament against Bracken County last season. (photo by Micah Satterly)

Sophomore Jared Wellman admits him being thrown into the varsity rotation as a freshman last season caught him by surprise.

The 6’4” guard averaged just around 10 points and six rebounds last season and has been playing the game since he was four years old.

He has working all offseason to transform his game from being a young freshman to being a dominant force on the court, despite still being an underclassman.

Wellman said he has played different sports his whole life, but basketball has been the one that caught his interest the most.

“Out of all the sports I have played throughout the years, basketball is the one I stuck with,” he said. “It has been the one I loved the most and I always have a great time playing.”

The video game addict said he was surprised when he first found out he had joined the rotation.

“It was crazy,” he said. “It is a whole different game from middle school to high school and making that transition was hard because you have to learn what you are doing and have focus at all times. I was not expecting to get a lot of time, but towards the end of the year I ended up getting more.”

Wellman said playing with  juniors and seniors motivated him to get one step ahead since he had the opportunity as a freshman.

“It was great because playing with and against seniors on that level changed my whole game.” he said. “I had to step up, be more aggressive and play harder. Nobody cares how old you are. It is all solid competition and you can never play soft because it is a physical game.”

Wellman said he has seen improvements in his own game since the offseason and will continue to work on his craft each day.

“I have been working on my handles,” he said. “This year, I will be playing more at the two spot and I need to work on my shot a lot too. I am hoping to be an essential part of the team and be able to give what I can give.”

Wellman said he has enjoyed open gym and is antsy for the season to begin.

“It has being going great,” he said. “Plyometrics have been helping me a lot with my vertical. Being able to get shots up anytime has been helping a lot, too.”

Winning a state title is the prize Wellman has his eyes on.

“We want to hopefully win state,” he said. “I have always wanted to play at Rupp and I would love for that to happen. That is everyone’s dream, but I want to go that extra mile in order to make that a reality.”

Coach Cook has confidence that Wellman will help build GRC’s program for years to come.

“Jared really figured out that if you really want to play and earn minutes then you have to go out and guard,” he said. “Once he figured the defensive side of it to go out and be a great defender, coach is going to find a way to play you. He has a lot of experience and he is building off that. He is such a good kid and he works hard. I think he is figuring out what kind of player he can be. He is playing with confidence, getting stronger and more athletic, and I think he is in a good position to have a special year.”