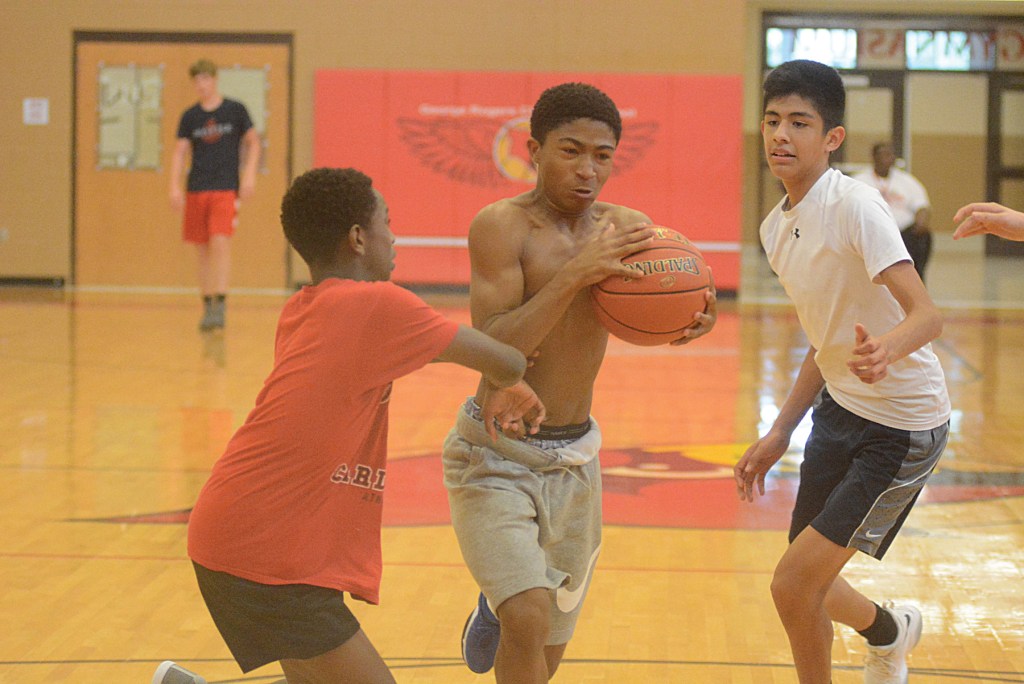 Duke Parker drives through the lane as Caleil Green and Sammy Hernandez attempt to stop him. (Photo by Micah Satterly)

The high school football season is right around the halfway mark, which means each day is one day closer to basketball season.

The Cardinals have wasted no time getting in the gym to work.

From the beginning of the month to the end of the month, players have had the option to participate in open gym and some plyometric work to prepare for the season.

Head coach Josh Cook has been pleased with the number of players that have wanted to be in the gym.

“I have really liked seeing their competitiveness,” he said. “They’re open-minded to work on their skills. When they are playing five-on-five or two-on-two, they are being competitive with it. When they play with the mindset of winning and knowing you need to get better then that is how you get better,”

Each head coach has full confidence in each team they are apart of, but Cook said this year’s team has a good opportunity to be something special.

“I like the mindset that our guys have,” he said. “Some of these guys are going into their third year and have been with me and the offseason process. The value of it is they come in each day wanting to improve. Whether it is the weight room or plyometrics, this team is in the mindset of going 100 percent each time they are on the floor. We have not had many times so far where they are not going hard. They are working hard to get better and I can see the benefit in that.”

Cook said he is excited to see the hard work from the offseason carry over into preseason.

“Flexibility is what we bring to the table,” he said. “I think our leadership is really good and once the season rolls around and more of our players roll in and we keep getting better, we will be able to play a lot of different ways. We will be able to put some good size on the floor and our guys will be able to play together like that. It is going to be really fun to coach because I know with different line ups you will have to play different styles. I am excited to see what we can do with all of our different rotations.”

Cook said he wants to take it one day at a time during the season and be able to make corrections early before it is too late.

“We just want to go as far as we can go,” he said. “Take each game one at a time and try to play our best basketball we can each night. If we go in with that mindset, you will see a team come March that will be prepared to make a strong run.”

Cook said the staff and the team are more than anxious for the season to start.

“The kids already want be in the gym and work,” he said. “We are all super excited. At some point, we will have more kids come out and be around it. When regular practice and tryouts roll around at some point we will get our football kids to come in and tryout. It is an exciting time to be here at GRC. I think our basketball programs are going to keep building off the previous years and keep improving.”