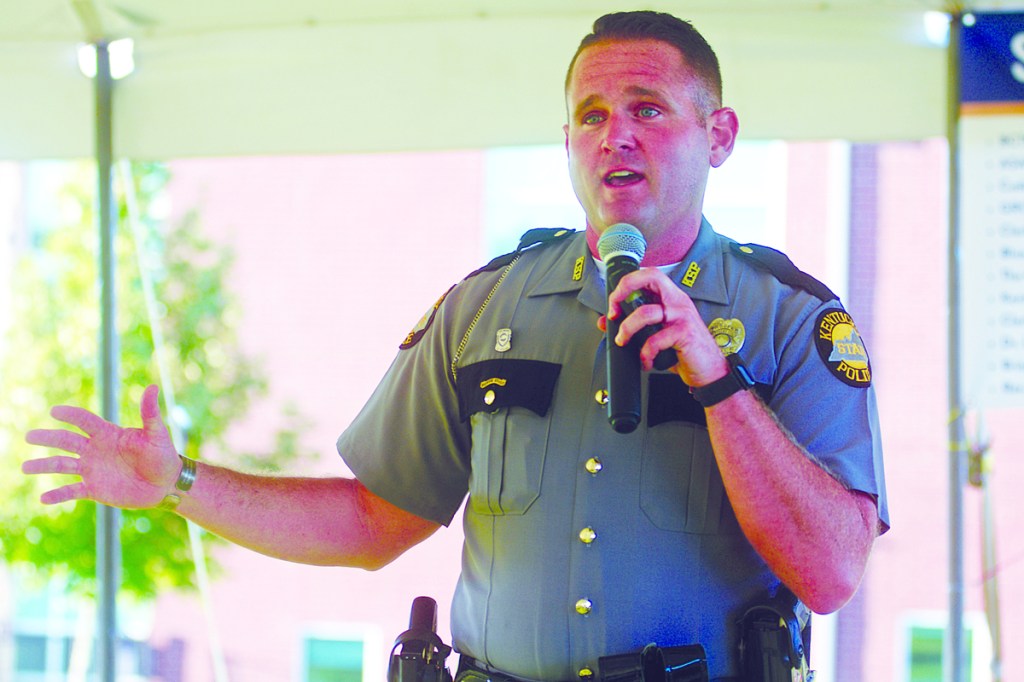 ASAP Coordinator Melissa Stocker said ASAP has been around since 2000, and focuses on prevention, education and treatments. These sessions are one of many efforts in the community dedicated to ending the drug epidemic.

“I’ve had to tell moms and dads that your son or your daughter isn’t coming home,” Purdy said.

Purdy said drugs have significantly changed over the past decade. In turn, the deaths by drug overdose have increased.

“It doesn’t take long to see we’re trending in the wrong way,” Purdy said. “And every single one of those people that died is someone’s son, daughter, mother, father, family member or best friend. And this world isn’t going to be the same without them.”

As a comparison, Purdy said there are currently 58,282 names on the Vietnam War memorial in Washington D.C. In 2016, more than 64,000 Americans died of drug overdose.

“That’s like losing an entire Vietnam memorial wall every single year,” he said.

Purdy said there’s a similar pattern among addicts. It builds gradually, likely from a young age, perhaps, with alcohol to marijuana to pain medication to heroin and so on. And every step in a person’s life dramatically affects the next, he said.

“Oftentimes, the decision someone makes early in their life is going to determine who they become, where they go,” Purdy said.

It’s like building a stack of rocks. The first rock must be smooth, large, strong, steady. And each rock after that must be able to balance the next — maybe not as large, but equally smooth, strong and stable. But one lousy stone and the stack comes crumbling down, he said.

But young people have yet to grasp that concept. Instead, children and teenagers are more in tune with the present.

“They don’t understand the long-term consequences of those decisions,” Purdy said.

Purdy said teenagers are finding ways to store alcohol or drugs in secret whether it be alcohol-soaked gummy bears or using flasks disguised as tampons, sunscreen, flip flops and more.

People are getting high on cough medicine; “robotripping” on dextromethorphan. Some concoct lean — also known as purple drank, purple lean or dirty sprite. It’s a combination of the prescription-strength cough medicine and soft drinks.

The percentage of THC (Tetrahydrocannabinol) has increased in marijuana, Purdy said. The marijuana people smoked in the 1960s and 70s is not the same as today’s strains.

Purdy said people are also increasing their THC potency by “dabbing” or extracting THC from marijuana using butane and high-heat to create a wax-like — when heated, an oil-like — consistency.

“The oil slick is the new baggie of marijuana,” Purdy said.

People are also “juuling,” a vaporizer that appears to be a high-tech flash drive of sorts, Purdy said.

There are dangerous synthetic drugs in communities and laced-drugs that can be fatal, he said.

Dr. LaTonia Sweet, a behavioral health specialist, also spoke about the importance of having conversations about drugs and alcohol with their children. She said it’s important to remain calm and listen.

“Listen,” Sweet said. “That’s probably the biggest thing. When I see people in their 20s and 30s, they say ‘nobody ever listened to me. Nobody cares. Nobody listened to me. They told me what to do. But they didn’t listen.’”

First Baptist Church Winchester pastor Marvin King Jr. challenged the audience and community to come together, to let the young people in the community know they are valued.

The next two sessions will be “Dangers of Social Media” on Nov. 8 and “Bullying/School Violence” on Jan. 14. All sessions begin with a free dinner at 5:15 p.m. with the course starting at 6:15 p.m.

Clark County Attorney Brian Thomas spoke before the presentation. He said Clark County has a drug problem, but there are many initiatives and community efforts actively working together to combat the issue.

Thomas said it’s crucial the community provides support for addicts rather than shunning them.

“If we say, we’re here, we understand, and we’re willing to devote our time, our attention and our energies to help you, I think that we — as a community — are going to continue to see improvement,” Thomas said.