Nailed It or Failed It: Angel hair pasta with chicken 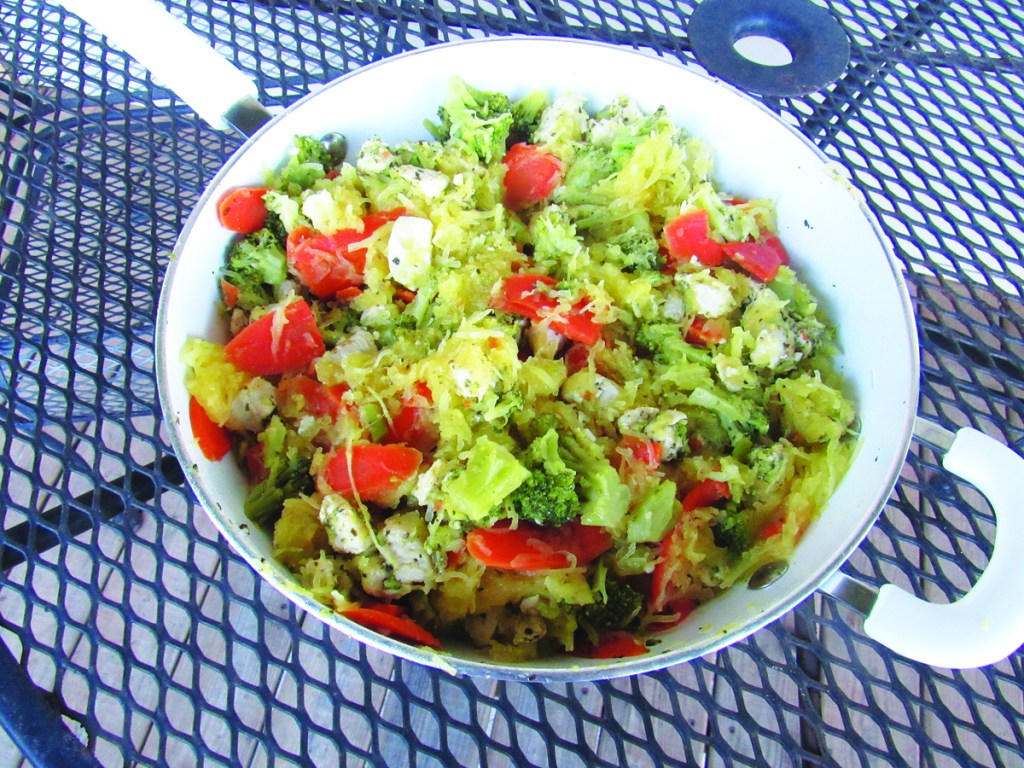 Brad had been away on his annual “roughing it” fishing and canoeing trip. While on his way back I texted him, asking if he had any requests for supper.

His only response was “not hamburgers” since he had them a couple of times while camping and several times on the drive up and back from Minnesota.

Since we had several spaghetti squash I’d picked from our garden I decided fix a recipe from my self-made cookbook using the squash and bacon (it is Brad’s and our grandson, Luke’s, favorite thing, afterall).

I thought a nice addition to that dish would be some grilled chicken. So I started looking through the recipes I’ve saved over the years. I was looking for a marinated chicken recipe when I stumbled on today’s recipe for angel hair pasta with chicken.

I usually follow a recipe exactly the first time I make it, but I decided I’d mix it up a bit this time and try using the spaghetti squash instead of the pasta.

I also thought the addition of crisp crumbled bacon might be a nice touch.

Early in the afternoon I decided to go ahead and tackle getting the spaghetti squash ready to cook.

A spaghetti squash is tough to slice, so I wrapped it in a dish towel to keep it from rolling around while I stabbed it with large kitchen knife. After wrestling with the squash for a while, I finally had it sliced in half, long ways, then I scooped out the seeds and stringy insides placing that stuff in my compost bowl.

Then I covered each half with plastic wrap and started prepping the other ingredients.

First I had to clean my chicken; by cleaning I mean cutting away every last piece of fat and anything thing that isn’t white breast meat — little bloody veins, cartilage, etc.

Then I cut the three boneless breasts into 1-inch pieces, placed the pieces in a bowl and put the bowl full of chicken in the refrigerator.

Then I washed, peeled and sliced the carrots with my mandolin. It makes slicing veggies so easy.

I didn’t have fresh broccoli, but I did have some in the freezer and decided that would work just fine.

The hard part was done and I was ready to cook some bacon. I cook bacon in the oven, making it pretty effortless. You just put it on a foil-lined cookie or baking sheet, cover it with parchment paper so the grease doesn’t splatter and bake it 365 degrees to your desired crispness.

Since I was going to sprinkle it over our dish I wanted it crispy.

When all of the bacon was cooked, I sat back and waited for Brad to arrive home.

He and his friend Lynn rolled in around 4:30 p.m., and after unloading the truck and bringing things into the house, I decided it was time to get started on our meal.

While Brad was putting away some of his things, I lined a cookie sheet with parchment paper and turned the oven on, setting the temperature at 375 degrees.

I drizzled olive oil on the cut sides of the squash and sprinkled each half with salt and pepper.

I placed the cut sides down on the parchment paper and let them cook for about 45 minutes. Spaghetti squash is ready when you can pierce the outside with a fork. When the timer sounded, I poked both halves but realized it wasn’t quite done so I let it cook 5 more minutes.

Meanwhile, I heated one tablespoon of the olive oil and cooked the chicken until it was no longer pink. When I knew it was done, I scooped all the pieces into a bowl and covered the bowl to keep the chicken warm.

There was liquid left in the pan from cooking the chicken, so I poured it out, added the remaining tablespoon of oil to the pan and let it heat up.

Then I added the sliced carrots to the pan. After a couple of minutes, I opened the package of broccoli and poured it in. I had fresh garlic, but I was lazy and just used three teaspoons of some jarred minced garlic I had in the cabinet.

After adding the broccoli, I decided the pieces were kind of big so as they began to thaw, I used some kitchen scissors to cut the pieces into smaller chunks, which would make it easier to eat.

When it was time, I added the chicken, chicken broth, basil, salt and Parmesan cheese. I had some fresh grated Parmesan, but not enough so I had to add some of the grated kind you sprinkle on pasta to equal a half cup.

After letting the dish simmer for a little bit, it was ready.

While the chicken part of the dish had been cooking, the spaghetti squash was done and I’d removed it from the oven and shredded it with a fork.

Since the chicken and vegetables weren’t quite ready, I just left the shredded squash in the squash shells and put it back in the oven, that I’d turned off, to keep warm.

When the chicken and vegetables were done, I pulled the spaghetti squash from the oven and tossed it in with the rest of the dish.

We were ready to eat.

After sprinkling our portions with some bacon (and Brad adding some more Parmesan to his), we began to eat.

We both thought this dish was good.

We talked about how we liked the spaghetti squash in it. Not only did it taste good, but we were definitely getting our servings of vegetables for the day.

During the meal Brad remaarked four or five times how much we liked this dish.

So folks, I nailed it and the recipe I tweaked is headed to my self-made cookbook.

Next time I may add even more vegetables to it, maybe bell pepper, maybe onion, maybe more.

Now, what to do with those other spaghetti squash? We’ve got a couple on the counter, and lots still in the garden waiting to be harvested. Yum.

Cook pasta according to package directions. Meanwhile, in large skillet, sauté chicken in 1 tablespoon of olive oil for 4-5 minutes or until no longer pink; drain and keep warm.

In the same skillet over medium heat, cook carrots in remaining 1 tablespoon olive oil for 3 minutes, stirring occasionally. Add broccoli and garlic, cook 2 minutes longer. Stir in the chicken, broth, cheese, basil, and salt. Bring to a boil. Reduce heat; simmer, uncovered, for 4-6 minutes or until vegetables are tender.