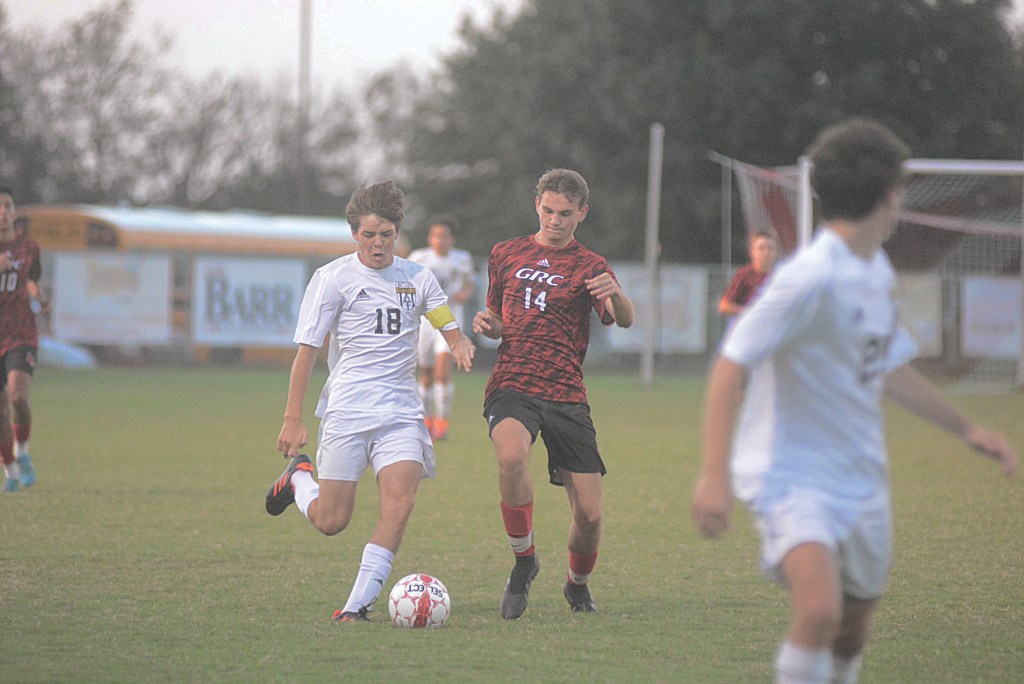 Will Hazlett (14) attempts to steal the ball Tuesday in GRC’s 2-1 win over Boyle County. (Photo by Micah Satterly)

George Rogers Clark hosted the Boyle County Rebels Tuesday in a match that resulted in a 2-1 victory for the Cardinals to give them their second win of the season.

The game was evenly matched on the defensive side as each team took away almost every opportunity to score. The Rebels fired shots the first four minutes into the match with a shot just outside the box that Tayman Hayes blocked and ricocheted back to another Boyle player and Hayes made another miraculous save for GRC.

Boyle had 13 shots in the first half to the Cardinals’ three shots.

The Cardinals shifted the momentum in their favor the second half. Jonathan Stefanski scored the first goal of the game after he had a break out run and managed to slide in to kick the ball while colliding with the goalie at the 27 minute mark. Both players had to be escorted off the field with injury, but Stefanski returned to the game.

Four minutes later, the Rebels responded with a goal of their own to even the match.

With just under 11 minutes left to play, Trevon Curtis passed it to the middle of the box and GRC put it in the back of the net to take the lead.

Coaches believe Stefanski was credited for the goal for his second of the night, but are unsure of who it was given to.

GRC fired 12 shots to Boyle’s eight in the second half. Three of those shots from the Rebels hit the crossbar.

Before the game, Boyle was sitting at third in the 12th Region and now have a record of 9-5.

“We were slow getting out at first,” he said. “The effort was not there. The thing that we have been preaching for the last couple of weeks is getting the ball where we need it and the effort just has not been there. Some of the kids are not operating at 90 or 95 percent of their ability. They are operating somewhere between 50 or 60. I talked to a couple of them right before halftime and told them it is their game and I have done all the coaching I can do.”

Ridener subbed in five junior varsity players and does not care about experience or talent level.

He is focused on who really wants to play and will do the things to win.

Junior varsity head coach and varsity assistant Jason Hayes was pleased with seeing the younger players step up to the plate when needed.

“This is the good part about JV,” he said. “They are playing very high caliber and giving their 100 percent. We have now won five in a row and only have one loss on the season. They are going off on a lot of highs, but most importantly, they know effort. Anytime these sophomores and juniors can assist varsity to give them a pep in their step when they need to is great. I am really excited that they can step up and help this team out to win.”

Hayes said the team may have gotten too comfortable after the early victory against Corbin the third game of the season.

“We won one other game and probably got a little complacent,” he said. “They thought it was the turnaround point, although we lost two games before that. We have to have heart and effort 100 percent of the time. With the flip of a switch, the other team could score and the momentum shifts. It has been several games between wins and these boys have obviously felt some disappointment. I am hoping at this point in the season that all this work throughout the season is for the postseason. I hope this ignites a spark for the next couple of games and I know these boys are capable of finishing the season out with wins and momentum going into the postseason.”

GRC has 22 combined sophomores and freshmen on the roster and Hayes believes the future looks bright for the program in upcoming years.

“We are sophomore and freshmen heavy,” he said. “That is the beauty of JV right now. We are not playing juniors and we are actually not playing sophomores. Most of the sophomores are playing with varsity since we are kind of light on juniors and seniors. Most of the JV team is freshmen. The JV team has a mix of middle schoolers and freshmen and we are pulling wins. We do not adjust our strategy. It is a really promising program and the next couple years when these boys play together and stand together, I think we will really dominate the district.”

GRC is now 2-8-2 on the season and will return home to host the 5-4 Pendleton County Wildcats Thursday.