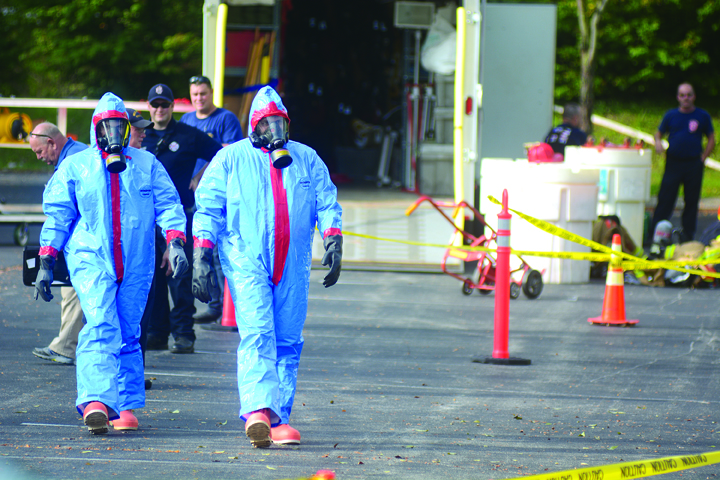 Firefighters dressed in HAZMAT suits respond to decontaminate "victims" during the CSEPP exercise in 2017. (Photo by Seth Littrell)

Gary Epperson, Clark County emergency management director, said several agencies are involved in the training and will officially begin their exercises at 8:30 a.m. and continue throughout the day.

“It’s the largest regularly scheduled full-scale exercise in the state of Kentucky every year,” Epperson said.

Crews will complete full-scale decontamination exercises as well as activate the emergency operations center on Maryland Avenue. All emergency responders are involved as well as the hospital, government agencies and schools.

Epperson said CSEPP began in 1985 following an order from Congress to have the Army destroy its entire stockpile of chemical weapons in the safest manner possible.

The Blue Grass Army Depot became one of the eight U.S. Army stockpile sites that initially participated in CSEPP.

Now only two states, Kentucky and Colorado, remain in the program, Epperson said.

“Kentucky has one of the last two stockpiles,” Epperson said. “Six have been destroyed.”

The Blue Grass Chemical Activity, located on the Blue Grass Army Depot near Richmond, has the responsibility for the storage, monitoring and eventual destruction of all chemical munitions stored there.

According to Clark County EMA’s website, CSEPP focuses on providing the personnel, equipment and training necessary to establish a response infrastructure that enables emergency managers to alert the public quickly, manage the response and communicate with the public, the media and emergency responders.

“It’s a beneficial exercise all the way around,” Epperson said.