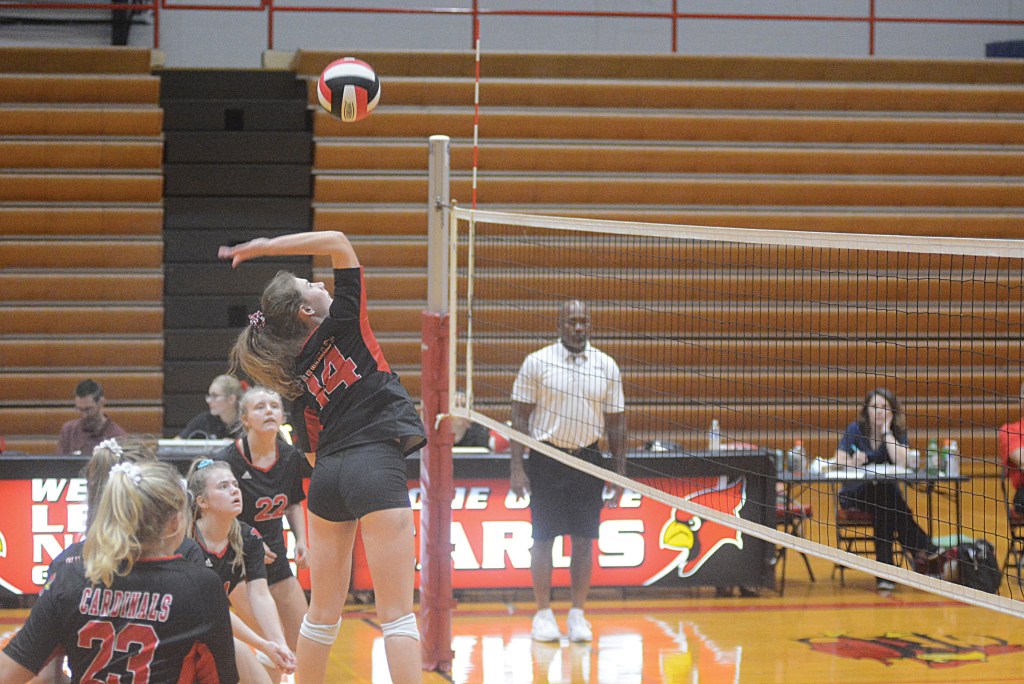 Emma McQuade spikes the ball for a kill Wednesday in GRC’s sweep against Bath County. (Photo by Micah Satterly)

The Bath County Lady Cats were no competition for the George Rogers Clark Cardinals as GRC swept them off the floor.

Since the last home match against Bryan Station last week, the Cards have heated up and have a 4-1 record the last five matches.

Head coach Jessica Bryson said she was fortunate her team got a win, but it was not the prettiest.

“We did a good job overall,” she said. “We did what we needed to do to get the win. They gave up a lot of errors and we are going into the end of the season. If we want to win some big games and compete in district in region then we are going to have to minimize those errors that we gave up tonight.”

Before returning back home Wednesday, the Cards competed in the Dink Scott Memorial Tournament in Montgomery County.

GRC lost the first two matches, but then went on to win the last three matches in a row.

Bryson said her team’s challenges were not too difficult, but is using that as an advantage to boost her team’s confidence.

“We had a little bit of an easy road in our tournament play,” she said. “We were not playing teams like Bryan Station in our pools. So having that advantage to come out stronger in the beginning of a game really helped them hone their skills, minimize those errors and get more wins overall.”

Bath County now has a record of 2-20 and Bryson admits it is a struggle keeping her team focused as well as showing intensity in games where the other team is not a challenge.

“I honestly still have not figured it out yet,” she said. “I try different tactics all the time to get them motivated. We talked about it and they get it, but the application is not quite there yet. Once we break that and figure that out, we will be that team that everybody is going to be ready to watch.”

GRC plays in the Thoroughbred Smash this weekend at Lafayette and will play two matches on Friday and two on Saturday.

Bryson said she is motivating her team for those four matches in such a short amount of time on a more personal level.

“I told them that we will be playing two of my rivals,” she said. “One of my biggest rivals when I was in high school so we have to beat them. I have never beat them, so they have to. Tt is exciting going into that tournament and knowing they will play tough competition and actually want to play. We are looking to minimize our errors and really come out swinging and ready to play.”