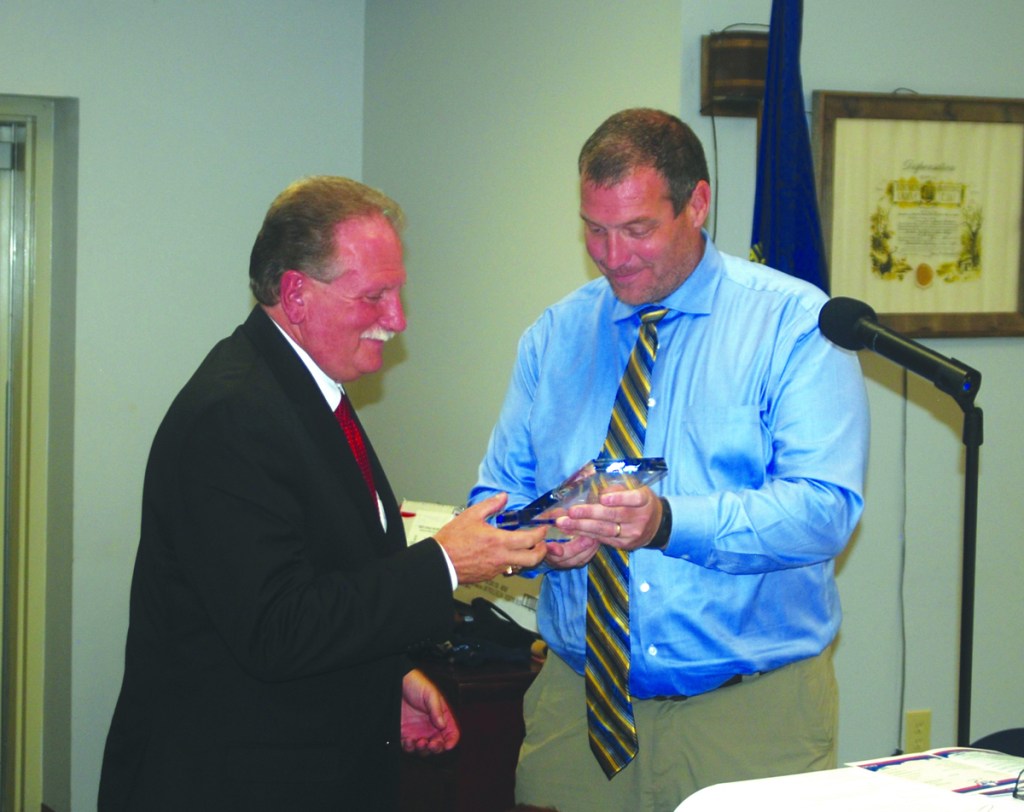 Clark County Sheriff Berl Perdue Jr., left, accepts the 2018 Distinguished Citizen award from the Bluegrass Council of the Boy Scouts of America Tuesday evening from Clark County Attorney Brian Thomas. Perdue was chosen for the award for his contributions to the community including as a youth sports coach. (Photo by Fred Petke)

That was in 1982 shortly after being hired at the Winchester Police Department.

More than three decades later, he calls Clark County home. Tuesday evening, he accepted the Clark County Distinguished Citizen Award from the Boy Scouts for his contributions to the community in the last 35 years.

“I came here in 1982 fresh out of college,” Perdue said. “I didn’t plan to stay but for three years. I wanted to go to Louisville and be a police officer. In three years, I fell in love with the community.”

The Beattyville native is unopposed for his fourth term as sheriff, which follows 25 years at the Winchester Police Department.

“This is where my heart is now,” Perdue said. “The people have been so good to me.”

Marlene Gonzalez, district executive for the Shawnee District of the Bluegrass Council, said Perdue was chosen for the award by a committee including past recipients, board members and community residents.

“Berl has had a role in getting the Explorer program started at the Winchester Police Department,” she said previously. “He and his wife have done so much for the community.”

While with the police department, Perdue said he spent a number of years coaching youth sports programs around Clark County. He also helped start the Shop with a Cop program in Clark County, which is run through the local Fraternal Order of Police lodge.

Perdue said the award was the most special of the recognitions he has received, including being Kentucky Sheriff of the Year in 2008.

“That’s because (this award) comes from Clark County and the Boy Scout council,” he said. “It means I made a difference in the lives of others. That means I did something right and I touched some lives in a positive manner.”

Retired WPD detective Steve Caudill worked with Perdue for the bulk of the last 30 years.

“I can tell you unequivocally that Berl always said, ‘If we don’t have them, we don’t do it,’” Caudill said of his approach to criminal cases. “Our number one goal was to rid our community of crime. If we can’t make a case, that suspect walks. He was always this way.”

“You couldn’t have a better recipient than Berl Perdue,” Clark County Attorney Brian Thomas said before presenting the award Tuesday. “He has honor.”