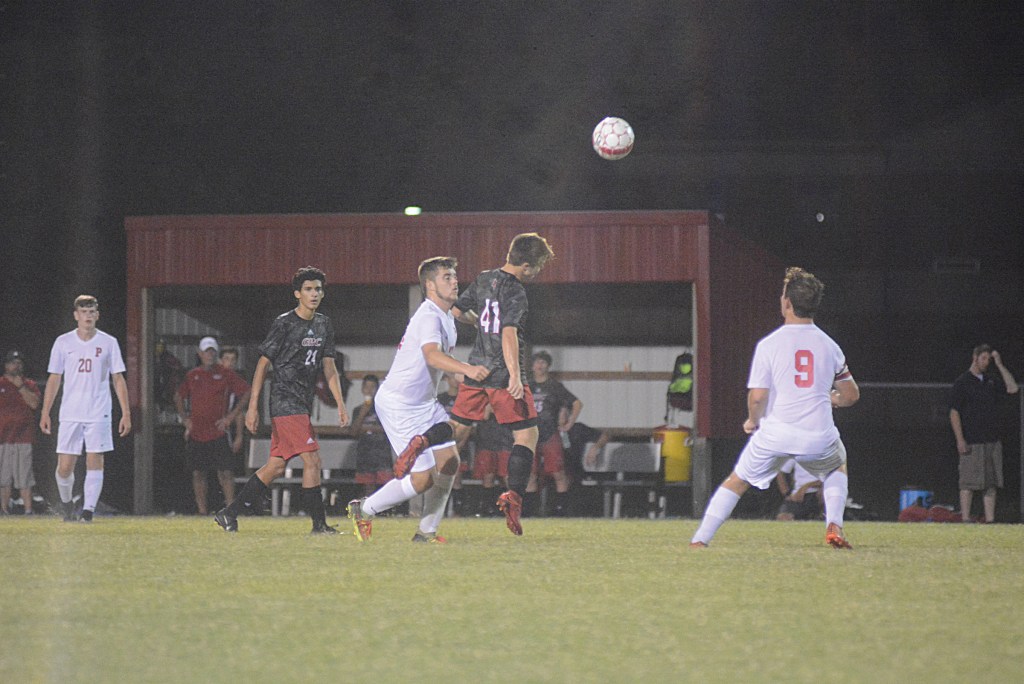 Trevon Curtis attempts to head the ball to a teammate. He scored both of GRC’s goals in a 3-2 loss to Pendleton County Thursday. (Photo by Micah Satterly)

George Rogers Clark hosted the Pendleton County Wildcats in a very physical match that ended in a 3-2 Wildcat victory as Pendleton took the lead late in the game.

The match between these two regional rivals wasted no time to get the action started as Pendleton took an early lead just 2 minutes into the game.

The Cardinals quickly answered back less than 30 seconds later with a goal of their own as Trevon Curtis found the back of the net.

Pendleton County had another opportunity to retake the lead as Trystan Hayes, started at goalie for the first half, got pulled out of the box but Conner Brown blocked the shot to save a goal.

Shortly after, Emido Piedra limped off the field and had to be subbed out but later returned to the game.

Sophomore Will Hazlett was also injured and did not return to the game.

With just under 26 minutes to play in the second half, Jonathan Stefanski led Curtis with a nice through ball which allowed Curtis to have a one-on-one with the goalie and scored his second goal of the night to give the Cards a 2-1 lead.

Just when GRC looked as if they were going to go home with a win, the tables quickly turned.

Pendleton managed to squeeze another goal to even the score with just 8 minutes left.

Then when the game looked like it was going to end in a tie, the Wildcats shocked the crowd once again.

Pendleton was rewarded with a penalty kick with only five minutes left to play and sank the shot giving them a 3-2 lead, which went on to be the final score.

Regardless of the loss, senior captain Trystan Hayes was more than content with how his team played.

“Tonight has been on the best games we have played in a while,” he said. “I think we came out and dominating overall in stats, physicality and everything. We had the game and it just slipped away from us. We came out and played hard with our heads high after Tuesday’s win against Boyle County and we just did our best.”

Hayes said the team’s lack of experience with not many upperclassmen would a struggle throughout the season.

“I knew coming into this that we would be a young team and a rebuilding season for the most part,” he said. “The talent, work and gameplay I have seen has been much more than I imagined for us. On paper, we look amazing.”

Hayes said his team’s last seven regular season games will be extremely crucial if they want to keep their hopes alive to be competitors in district and possibly the region tournament.

“We need to come in strong the next few games,” he said. “Not necessarily win them all, but we need to give it our best so when we go into the district tournament we will have our confidence built up.”

GRC will have another home game next game Tuesday as they have a district matchup against the Paris Greyhounds.