The greatness of American chestnut trees 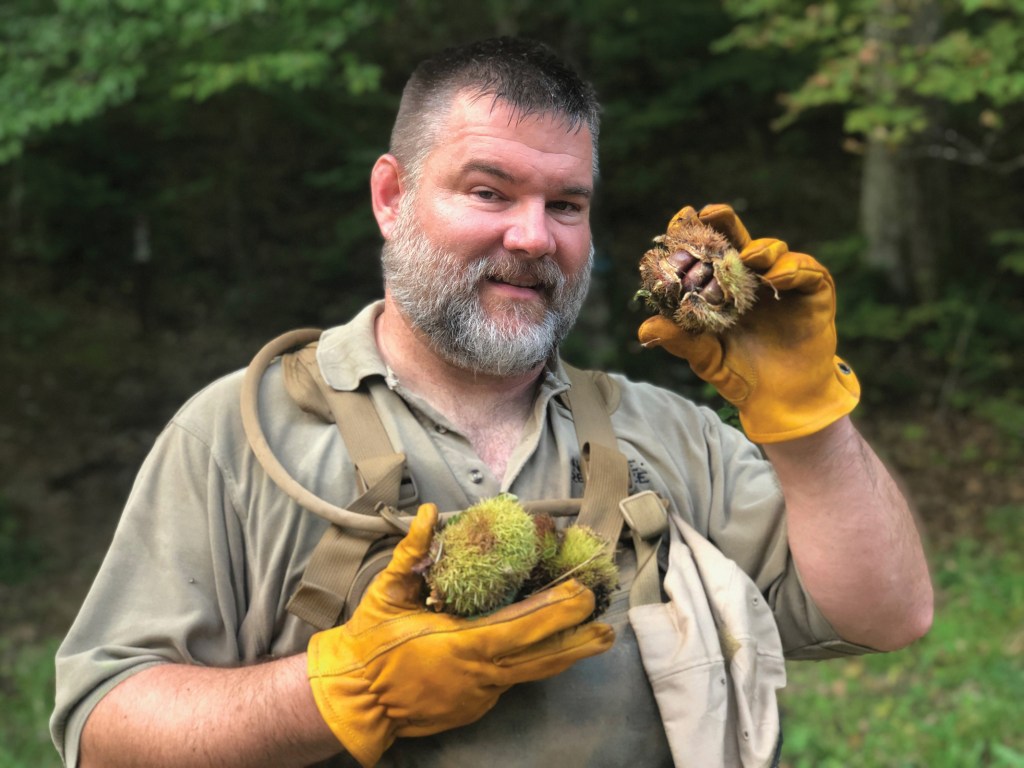 am a true tree nerd.  You may have already figured that out if you read these columns regularly.  I enjoy studying trees as much as anything else that I do outside.  If you have ever seen our Nature Reliance School logo you will notice two symbols on it.

One is a Kentucky long knife, I may write about that in another column.  The other symbol is of an American Chestnut (Castanea dentata) leaf.  Both symbols represent the same thing.  That is things that are mostly gone from today’s modern world, but Nature Reliance School is doing what it can to preserve.  Most of that relates to woods skills, but it also relates to our natural resources.

Around 1900 a fungal pathogen was imported into the United States from Asia.  This fungus was first detected in an American Chestnut tree in what is now known as the Bronx Zoo.  At that time American Chestnut was the most important tree found in the forests of the Eastern US.

Its nuts were important for wildlife and human consumption.  Rural communities would gather them and use them, as well as, ship them out by rail car and paddle boat to make income from the mountains.

American Chestnut trees grew to be over 100 feet tall and they numbered in the billions at that time.  The wood is straight grained and rot resistant so it made an excellent lumber choice for rural communities to use as railroad ties, barn beams, fence posts, furniture, and even musical instruments.  The blight changed those uses and our forests forever.

What the fungus did was invade the trees through any available scar, which almost all trees have.  It then attacked the cambium layer.  The cambium layer of any tree is the layer that is directly under the bark that we see on the outside.  The cambium layer is the vascular system for trees and it is the pathway for nutrients up and down the tree.

This fungus choked that system off so each of trees would then eventually die from a starvation of nutrients.  By 1950 nearly all mature American Chestnut trees were either gone or far along the process of dying.  Communities recognized this and harvested as much lumber as they could before the trees rotted in the forests.

It has often been said that the blight and death of the American Chestnut is the single worst ecological disaster to hit our forests in history.

Most people believe that American Chestnut trees were gone forever.  That is not true.  Many offshoots will grow from the stumps of harvested trees.  This means you can find isolated trees here and there throughout the forests.

I personally know where about a dozen or so are spread out through the Daniel Boone National Forest.  When I had a young man’s legs I used to explore and hunt those hills for critters but was always on the lookout for chestnuts as well.

Unfortunately, these trees will eventually succumb to the blight as well.  The fungus is still in our forests, primarily housed in oak trees which are resistant to it.  It will find its way to the current live chestnuts eventually.  Which brings me to the picture attached to this article.  I pick up a few of the nuts as often as I can and plant them in areas that I know are capable of being good homes for them.   We now have several of those trees that are 10 ft tall or more.   I have also informed the Division of Forestry of most of the locations for the trees, so they can harvest some and study them as well, which they have done on numerous occasions.  I always leave plenty for the surrounding wildlife.

What took eons of time to grow, only took about 40 years of time to destroy.  I will never see the mature trees that I have planted in my lifetime. It may sound odd, but there is something very satisfying about knowing that.  I believe we should all endeavor to leave this world better than we found it.  I look forward to seeing you on, or off, the trail sometime soon!