Clark man with Down syndrome inducted in to fraternity 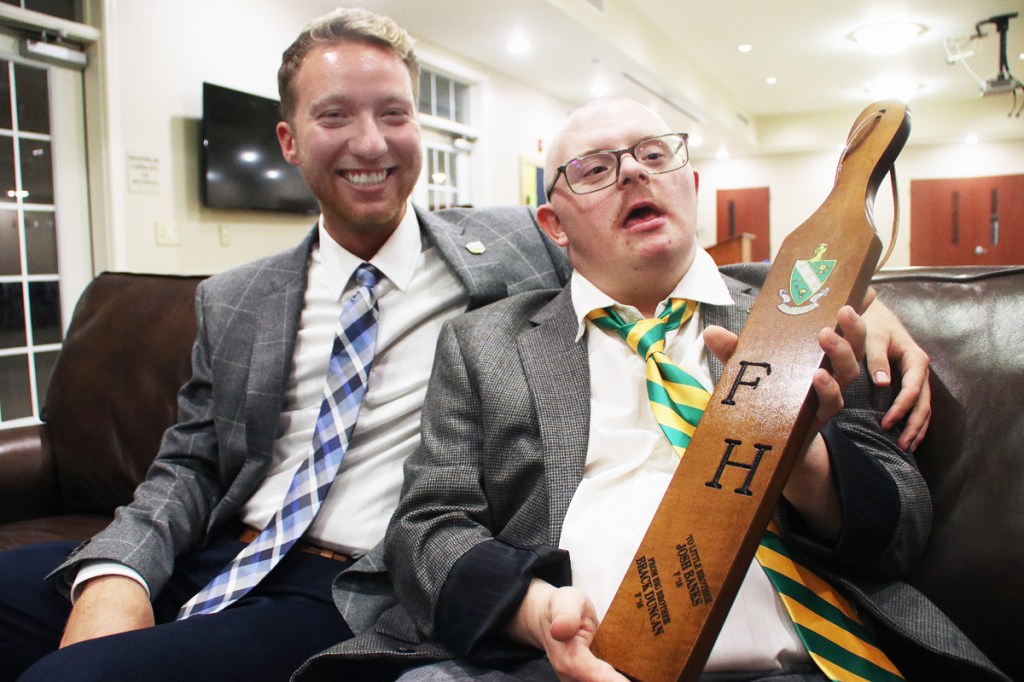 Josh Banks, right, shows the paddle he received after being inducted into the FarmHouse fraternity at the University of Kentucky Monday. Banks was introduced by fellow Winchester resident Brack Duncan, left. (Photo by Whitney Leggett)

It’s rainy and dark outside, but inside the FarmHouse Fraternity building on the University of Kentucky campus, the mood is bright.

Josh Banks rests quietly against the back of a dark brown leather chair watching as a celebration takes place in his honor.

The 33-year-old is overwhelmed with emotion and begins to cry, burying his face into his arms for just a moment before wiping the tears from behind his glasses as he smiles.

Of course, anyone might be overwhelmed at the thought of making history, and that’s what Josh did Monday evening.

With a ceremony before dozens of his friends, brothers, family and loved ones, Josh was inducted as an associate member of FarmHouse Fraternity’s UK chapter.

The 33-year-old Winchester resident is the first man with Down syndrome to be inducted into a social fraternity in the U.S., according to research done by the chapter.

Josh was introduced to the fraternity by Brack Duncan, also of Winchester.

Brack is Josh’s community living support specialist at STRIDE, which offers therapeutic day services for individuals with disabilities in Clark and surrounding counties.

“I started working at STRIDE when I graduated high school,” Brack said. “A friend worked there and suggested the director reach out to me because I clog and Josh had also clogged before, so we had something in common and they thought we might get along well because of that.”

And get along well they did. Josh and Brack’s relationship quickly blossomed into more than just a work thing, he said.

The pair initially began spending just a few hours together a week through the program, but these days, they spend several days a week hanging out.

Brack is a senior education major at UK and vice president of member services at FarmHouse Fraternity, so Josh also quickly became immersed into the FarmHouse community.

“We just clicked,” Brack said. “He would tag along with me to all of the philanthropy events and other fraternity functions.”

When it came time for the fraternity to participate in the annual Kentucky’s Got Talent contest to benefit St. Jude Children’s Hospital, Brack asked Josh to clog with him.

In April, the pair danced a lively hip-hop-inspired clogging routine for the contest and quickly stole the hearts of people across Kentucky. The video went viral on social media. They even went on to raise more than $5,000 for down syndrome research.

“After Josh participated in Kentucky’s Got Talent and that went viral, we decided he was such a great representative for our organization and we wanted to make it official for him to be a brother,” Brack said. “Our president, Ben Bohannon, actually came to me and asked if I thought it would be a good idea and we were all on board. He had done so much for us already, it just seemed right.”

Brack said Josh has been a staple at the fraternity for years, attending events and hanging out with the members. It’s a place where Josh fits in.

“Josh might need some special attention from time to time,” Brack said. “But his Down syndrome does not make him any less of a person. It doesn’t hold him back and he just fits in with the rest of us. He enjoys the same things we do and he looks up to a lot of the guys in the fraternity. Every time he’s around, he convinces someone to take him for a ride in their truck. He’s just one of the guys.”

Brack said he hopes Josh’s involvement with the fraternity will help break down misconceptions about people with disabilities and the Greek community.

“A lot of people have a view of fraternities,” Brack said. “But we are about more than a lot of people realize. It has been cool for me to get to see that side of everyone. It shows people that this is about making a difference in people’s lives and giving back.”

While the brothers at FarmHouse have strived to make a difference in Josh’s life, it is evident he has taught them a lot, too.

“After Kentucky’s Got Talent, we got so many messages from other families with children with special needs,” he said. “They would talk about how much Josh inspired them and how great it was to see him be included. It gives others hope to see that Josh is just like the rest of us and so are they.

“And for others, especially young people, who are on the Internet and social media and seeing a lot of stuff that is fake or unauthentic, they need to see something real. And that’s about as real as it gets.”

Because Josh is not a student at UK, he was inducted as an associate member of the fall 2018 class.

Monday night he went through a full induction ceremony complete with a pinning ceremony. He was also gifted a FarmHouse paddle that reads “To little brother Josh Banks from big brother Brack Duncan.”

Now that Josh is an associate member, little will change Brack said.

“He’ll just continue doing what he already was,” he said. “He’ll attend our events, be a part of philanthropy efforts, continue to bond with us. It’s all the stuff he was already doing. It’s just official now.”

Josh spent his first night as an official brother sleeping over at the frat’s house on UK’s campus. He said he is excited to be part of the brotherhood and has a lot to look forward to.

“I feel good,” he said. “I am excited to get to hang out with Brack, listen to music and ride in their trucks.”

He’s officially one of the guys. That’s worth shedding a tear over.