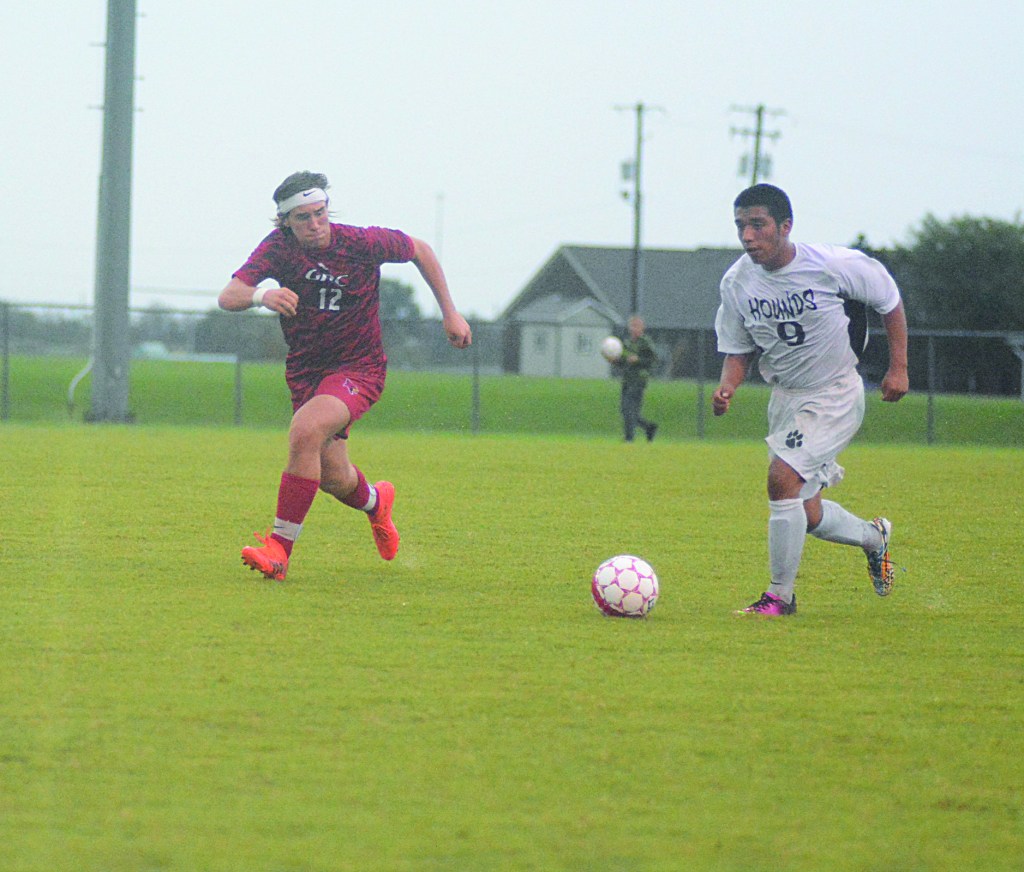 Brandon Adams (12) sprints to catch up to the Paris midfielder Tuesday and takes the ball away from him. The Cards were victorious 3-1 in a game that lasted only through the first half due to weather. (Photo by Micah Satterly)

George Rogers Clark pulled out their first district win against Paris Tuesday 3-1 in a match that lasted until halftime.

The downpour of rain and thunderstorms caused the game to come to a halt.

With 30 minutes left to play in the first half, Brandon Adams scored the first goal of the game to put the Cardinals ahead of the Greyhounds with an assist from Nathan Sidwell.

At the 10 minute mark before halftime, Ryan Sosa put another goal in to quickly put the Cards ahead 2-0 with an assist from Jonathan Stefanski.

Paris stormed back just a few minutes later to bring the game back within reach with a goal of their own.

30 seconds later after a few crisp passes and only four touches on the ball, Stefanski was able to score to help the Cards pull away 3-1 at the half with an assist from Emido Piedra.

“It was a very important game for us,” he said. “It is important for us to continue and do things that we need to get done, and finding the back of the net. We struggled all year with goals, so we got three in this time.”

Ridener said was particularly impressed with with the ball movement from his players.

“We were moving the ball well,” he said. “We were playing Emido and he was holding what we call the 11 spot. He was making good crosses and he was set to have a good game. Balls were falling into areas we could score from. Ryan Sosa got one of his few goals of the season, which I hope will open him up. He will be key the rest of this week and next week going into district and we need him putting goals in.”

Wins or losses, Ridener has liked what he has seen from the Cardinals this season.

“We have improved every game,” he said. “Hopefully we can carry the momentum into that game and do the right things to put the ball in the goal. Of course we definitely need a victory on top of that.”

Ridener likes his teams chances as the season progresses and the postseason draws closer, but he said the bottom line is his team needs to score to win.

“We have played well in every game except for scoring,” he said. “We are a decent possession team, but when we do not score and they score of course we are always in the negative. If we can just get the scoring in and build on it the next few games I think we look pretty decent going into district tournament.”