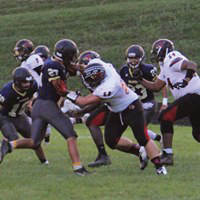 The Cardinals will be heading to northern Kentucky Friday to take on the 2-3 Boone County Rebels. (Photo submitted)

Cardinal football is finally back in action after a long two weeks.

George Rogers Clark had a bye week last and will return to the field Friday as they travel to Boone County to take on the Rebels.

Boone is currently 2-3 on the season after picking up a 28-27 win against Dixie Heights last week.

The Cards will be looking to improve to 4-2 for the second straight season.

Head coach Oliver Lucas said his team had time to take advantage of their bye week to prepare for the back end of the season.

“We have still been working and have been trying to sharpen up some things that looked kind of raggedy on film,” he said. “We had to straighten those things out and bring the kids’ heads back into focus.

“Every coach will go in there believing you can win,” he said. “If you don’t then you surely won’t win. We like our chances. We need to go out there and play hard and be mistake-free football. Boone County is much improved and we will have our hands full Friday for a tough game.”

Lucas said the Cards will have be mentally and physically tough in order to come out of Northern Kentucky with a win.

Lucas said his team has worked to get to where they are now and feels as if everyone is on the same page to achieve the same goal.