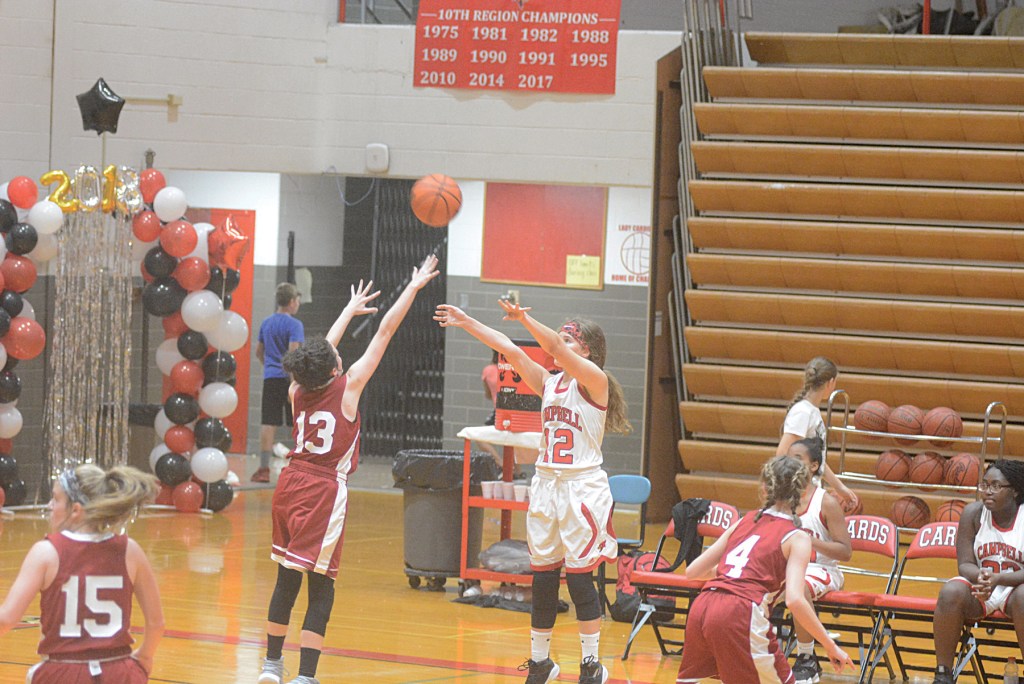 Kizanne Huston (12) shoots a three in the face of a Harrison County defender. (Photo by Micah Satterly)

Campbell Jr. High girls basketball came out with a 37-28 win on eighth grade night in a hard-fought, close battle against Harrison County.

Head coach Juan Byars has liked the way his team has been performing all season.

“I thought we actually did a great job,” he said. “We have lost only one home game this year so we are now 7-1. This eighth grade team only won two or three games the past two years. After we win it seems like they are not excited. It is kind of like we did something wrong, but getting them to understand to work every day and play hard every day is what we get them to work on during practice. Not giving up or letting up.”

Most coaches would have one specific aspect that they want their team to work on, but Byars has a list of many things he wants his team to improve on.

“Everything,” he said. “I do mean everything. If I could get a couple more girls to play with confidence is pretty much where we are. We are trying to get them to have confidence in themselves. Some of the eighth graders are going to play high school and are preparing for that grind that comes with it. Some of them that played here last year did not have high expectations set for them. Our expectations are high now at Campbell and move in the direction. We want to hopefully put a banner up this year.”

Byars has confidence in his team because of how hard they work day in and day out.

“Their work ethic is what stands out the most to me,” he said. “They come to work every day. We have played hard every single came, but we just have not played smart. We have gotten into early foul trouble because they are being aggressive and not playing smart. Once we can get them to have more basketball intelligence and get them to progress we will be a lot better going down the stretch.”