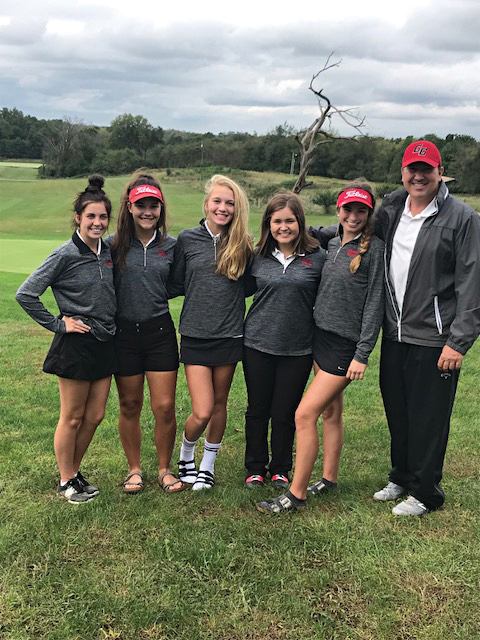 The golf team will be headed to Bowling Green Tuesday to compete in the state tournament after finishing second in the region. (Photo by Micah Satterly)Left to right: Joy Lisle, Hannah Curreri, Aniston Coulton, Brenna Rose, Molly Franklin and coach Scott Franklin.

George Rogers Clark girls golf will be heading to Bowling Green next Tuesday to compete in the first day of the state tournament.

This is the Cardinals’ second straight year headed to state.

GRC came in second in the region tournament at Georgetown’s Longview Golf Club with a team score of 360 and Scott County came in first with a 321 score.

GRC has won three tournaments all together this year and placed second twice.

Head coach Scott Franklin said his team is beyond excited to have the same opportunity to return to state as last year.

“We are so excited,” he said. “I am very pleased with how the region turned out. Winning some of those tournaments and placing in them has helped our motivation. Our goal was to come back and try to make it to the second cut. We hit the first part of the journey so we have to refocus and get a practice round in to help us get going. We have to keep moving in the direction we started off in.”

The first day of the tournament is Tuesday with 30 teams starting off and by Wednesday there will only be 15 teams left.

Franklin said his team has not made it this far by luck, but simply for their dedication and hard work.

“We have put a lot of hours and played a lot of hours,” he said. “We knew what our goal was going into the year. We played in a lot of events and tournaments. We practiced long hours and that hard work is finally paying off.”

Franklin said his team will battle competition and take it one step at a time to make the first cut and continue their season into the second day of the tournament.

“We have a big test in front of us,” he said. “We have to shoot our best score to make it the second day and we can do it. We have to make sure everyone is focused and in the right state of mind. We have to be relaxed, and I know it is easier said than done, but the more relaxed you are the better we play.”

Franklin said the team chemistry has been a big part of the team’s success.

“They all have been

playing golf since sixth and seventh grade,” he said. “They have all continued to pursue golf, got better and stuck it out. We have a real special group of girls and they are always around each other. This is one of the tightest groups as far as a team goes that I have seen as a coach. We have a lot of younger girls that have time and room to improve. Hopefully we can achieve our goal in making the second day, which is what we are shooting for.”

Franklin said he is thankful for all the support from the community to help put the golf team in the position that they are in.

“We have had a lot of help from the people at the country club,” he said.  “Robert Baldwin and the staff there have been awesome to us, the parents and all the people who supported us throughout the year. We would not be able to do the things we do without the support of all those people.”