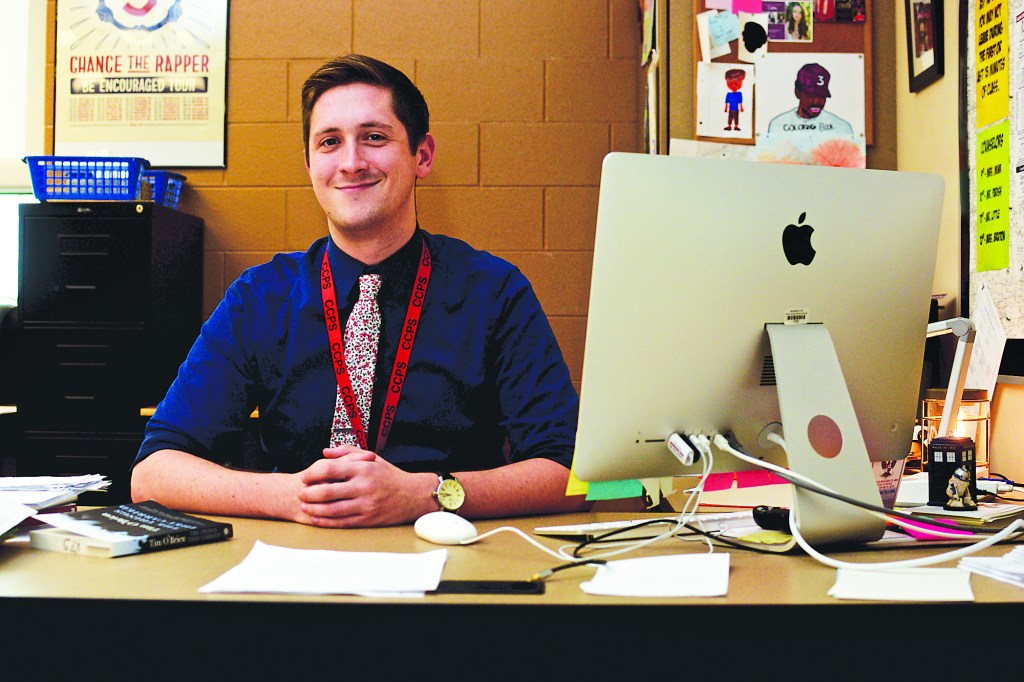 Kyle Smith began his first teaching job at George Rogers Clark High School and is well into his fourth year as an English teacher at GRC. Along the way, he's picked up a few extra responsibilities. He's now teaching a couple of Advanced Placement classes as well as involved with senior advising.

During the summer before his senior year of high school, Kyle Smith was considering two possible career paths: pediatrics or education.

While attending the Governor’s Scholars Program, Smith’s campus director talked about a similar dilemma. His director said the application for medical school asked the applicant to respond to the following question: Why do you want to be a doctor?

“He said there was no reason whatsoever he could give as to why he wanted to do that job,” Smith said. “And at that point, he realized that’s not what he wanted to do. It was just what everyone had wanted him to do throughout life.”

Smith took those words to heart.

“I thought, ‘There’s no reason in the world why I wanted to pursue this track either,’” Smith said. “And so really, I’ve always loved English. I knew I wanted to work with students. So at that moment, I knew I want to be an English teacher, and I’m gonna teach high school English.”

Today, Smith is living that dream.

Smith is entering his fourth year as an English teacher at George Rogers Clark High School.

GRC is much different than the high school he attended as a teenager. He was one of 17 in his graduating class in Cloverport, a small town on the banks of the Ohio River.

He graduated from the University of Kentucky with his bachelor’s in secondary English education.

“While I was there, I just tried to do anything I could do to make myself better prepared for this job,” Smith said. “That way, I could make sure I was serving the students to the best of my abilities.”

He also earned his master’s degree in education at UK and is working on another master’s at Middlebury College.

Smith said he was drawn to English because it reflects life. The subject lends itself to meaningful discussion among students.

Smith said he also enjoys breaking down the English language, talking about grammar, connotations and denotations, syntax and more. He said he is fascinated by word choice.

“Just one little word can entirely change the meaning of an entire sentence,” Smith said.

He said he hopes to help students become articulate, teaching them to vocalize their ideas.

Last week, he had a student ask, “Why do we call it a desk?”

However, not all of Smith’s students are as enthusiastic about English.

Smith said he tries to connect with each of his students. He reminds them English is a subject of continuous improvement, and even he is always improving on his reading, writing and speaking abilities.

Smith’s mother was an elementary school teacher in Cloverport. As a child, he saw his mother bring home her work and witnessed former students stop to talk to her on their outings.

“Honestly, I feel like my mom set a really strong standard for me to live up to,” Smith said.

Now, as a teacher himself, Smith said he didn’t initially anticipate the full scope of a teacher’s responsibilities. He realized you never stop being a teacher.

“I can go home and decide to go get dinner with some friends, and I can look over and see students,” Smith said. “So you constantly have to be in that ‘Mr. Smith’ sort of persona. If you’re trying to be a good role model for students, you have to make sure you’re constantly living up to their expectations. I recognize the responsibilities with it. But I didn’t necessarily think about how it’s just a part of your life in a way that doesn’t end once the bell rings.”

Though Smith is living in Lexington, he tries to be in the Clark County community as much as possible to support and further connect with his students.

“I feel if you establish those connections with students, they’re more likely to feel more passionate about what they’re doing for you in the class,” Smith said.

Smith said he is impressed by each of his students, especially when grading their assignments or through his conversations with them.

Last year, while reading “The Things They Carried,” Smith monitored a passionate discussion among his students about details of the book. He said it was inspiring to see how engaged the students were with the content and each other. It reminded him why he wanted to teach in the first place.

He said he hopes his students remember how much he cares for them.

Even when they graduate, Smith said his door is always open.

Students can call or email anytime, whether it be for life advice, checking in or asking him to edit a paper for a college class.

As for this year, Smith said he has plans to improve his communication with his students’ families.

“I’m passionate about making sure I contact families, not just for whenever their student has done something poorly. Because once you get to high school, parents rarely hear about what’s happening,”  Smith said. “One of the things I like to do is email positive praise all the time because we’ve got really good kids here, and they deserve to be bragged on

especially whenever they’re doing something as simple as making sure they turn in their work on or volunteering to read in class. That makes a huge impact, I think, in their lives to know they’re supported by someone here.”

Smith said he recognizes his privilege in the world, growing up in a stable, middle-class family with two parents who were together all throughout his life.

“Not everyone has lived like that,” he said. “I think it is important to try my best to uplift people to make them recognize that no matter what their situation is, they still are a valuable asset to our world, and to be able to understand and listen with an empathetic and caring ear about what other people have to say.

“We’re a fairly divided society right now. But that shouldn’t be something that exists within our schools, because we should all be working for the betterment of our students and our students’ lives.”

While his students may call his teaching style “chill,” Smith said he tries his hardest to get his students to connect to the material in some way.

For example, when teaching a lesson about the parts of speech, he incorporates popular song lyrics. After all, Drake’s songs are much more engaging than “the dog jumped over the fence,” he said.

As for advice for new teachers, he said he hopes they keep in mind the expectations their students may have for them.

“Just because I’m the teacher doesn’t mean my expectation should be the most important thing,” Smith said. “…Take time to get to know your students because by learning what they expect of you, you can make sure that you’re meeting somewhere in the middle and giving them the best education that you can.”

Outside of teaching, Smith loves to travel. Smith has gone all over — England, Iceland, The Netherlands, Sweden, New York City and more. He also enjoys reading; he’s a Potterhead as evidenced by a small tattoo on his wrist. Smith said he also listens to podcasts on his way to work and tries to go to concerts when he can.