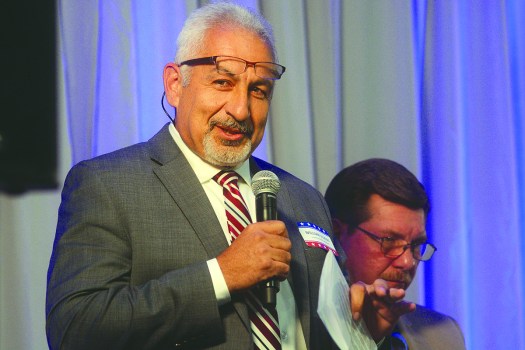 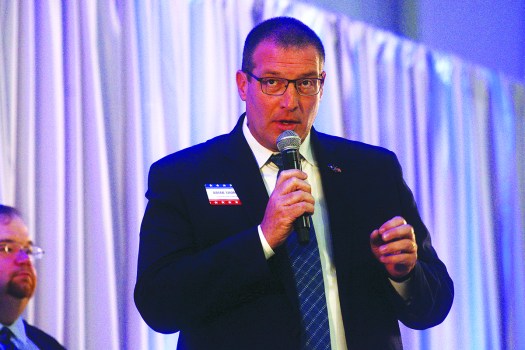 Elkins said what’s good for the citizen is good government.

Elkins said he understands many people feel unheard by the government.

Elkins said the office is not there to only bring cases against citizens, but from time to time citizens may need to be prosecuted.

“On a case-by-case basis, we’re going to be fair, we’re going to be as gentle as we can be, but as firm as we have to be,” he said. “Make sure that we follow the law and that when your experience with the county attorney’s office ends, you feel like you were heard.”

Thomas said the role is not only to prosecute, but also to ensure justice is done.

“Justice comes in many forms,” he said. “In situations where we might have someone that has a zoning violation, we need to listen to those citizens. We need to see if the person who is charged or the area we’re trying to recover is complying with the law … That’s what the county attorney does. He doesn’t make policy. He enforces the laws that are passed by our magistrates, by our state legislators.”

Thomas said his office provides legal advice to the Clark County Fiscal Court but also fights for the rights of the vulnerable.

“Today we actually received a ruling from the court of appeals that now protects children,” he said. “It was against a citizen, but … we fought for the rights of the vulnerable and the children. Last week we argued in front of the Supreme Court the exact same thing that children should be free from being put in the hands of sexual predators. That’s what we’re doing, and that’s what we will continue to do.”

In regards to restoring rights to convicted felons, Elkins said that is not necessarily in the scope of the county attorney’s office.

“But nonetheless, having seen the struggle of many people in this community where that’s concerning, that’s sort of an after-the-fact, remedial, what now kind of question,” he said. “…My approach is going to be to get out in front of crime. To treat crime in its infancy, before we wind up with subsequent convictions that eventually end up as felony convictions.”

Thomas said the issue has to be looked at on a case-by-case basis.

“The county attorneys’ office does not prosecute felons,” he said. “… But we can never lose sight of the fact that it is our job to see justice done.”

Thomas said his office offers assistance with filling out the legal paperwork for the restoration of rights.

He said helping people convicted of felonies regain their rights or their sense of community is essential.

To address persistent crimes like drug activity and prostitution in known areas of the community, Elkins said he would focus on recidivism.

“Recidivism is an idea that we’re not effectively treating crime in a way that people in the community don’t continue to re-offend,” he said. “I’m sure we’ve all seen an area of town where we think these things are going on … I think the role of the county attorney’s office is to prosecute the drug offenses and prostitution offenses in the area with a no second chances policy. I think once you deal as firmly as you have to with people engaged in these activities on a region-wide basis, that it’s going to be jail time for crime, I don’t think you’re going to have as much crime.”

Thomas said the answer is not just the prosecution. He suggested approaching it in two ways: making law enforcement aware of drug activity and dealers but also addressing addiction.

“We have to remember that those addicts out there are your children,” he said. “They are your sons and daughters.”

He noted Casey’s Law, which allows a family to register their loved ones with addiction for involuntary treatment. He said he partners with local agencies, churches and Celebrate Recovery to implement the program. A doctor volunteers his time to do assessments, and a psychologist offers low-cost assessments.