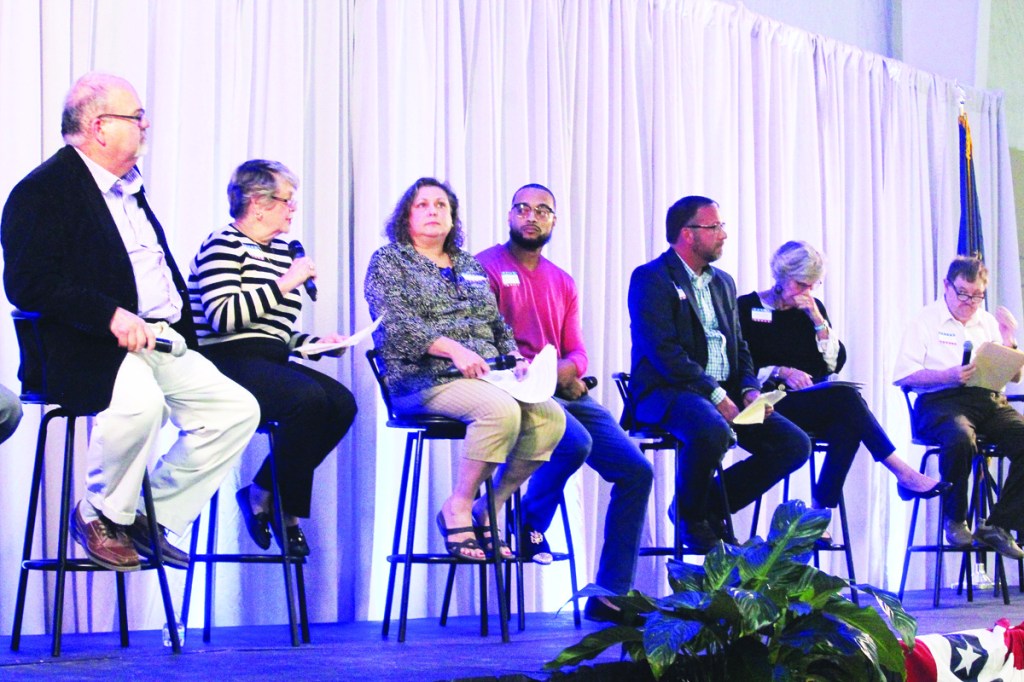 Candidates for the Winchester Board of Commissioners speak at the community forum hosted by Better Together Winchester Thursday at First Baptist Church on North Highland Street. (Photo by Whitney Leggett)

Most all candidates said it was a serious issue and attempts to address the issue have been made over the years, yet no comprehensive process has taken place.

Multiple candidates reported the cost of a project that had been looked into to address the traffic would be about $3.2 million.

Commission candidate and incumbent Kitty Strode said it had been an issue for many years and the property owner of the land that intersects the potential project doesn’t want to sell their land. The only other possibility is to condemn the property — a process that could take another two years, Strode said.

Commission candidate Ramsey Flynn said, if elected, the traffic issue would be a number one priority.

Commission candidate Seneca Anderson proposed building a road parallel to the side of the railroad tracks.

Flynn said the formerly complaint-driven system was broken, but with the recent appointment of a code enforcement officer who proactively seeks code violations, it is improving. Flynn said he would like to see another officer added.

City commission candidate JoEllen Reed agreed the system was broken; it was reactive instead of proactive.

“If codes and ordinances aren’t going to be enforced, take them off the books,” she said.

Reed said people are now receptive because of the new officer, who is educating citizens about how to be compliant with the existing codes.

Burtner said the city would never reach perfection when it comes to code and ordinance compliance but the law enforcement officer has been successful. Burtner also said it’s crucial to maintain the opportunity for citizens to report possible code violations in their neighborhoods.

“We have to always make sure citizens have a voice,” he said.

Anderson said it is clear codes were never equally enforced.

“My perception is the codes were never enforced because if they were Main Street would not have been in the condition it was in before the revitalization, and I do not believe that they’re equally enforced because in Poynterville — or Bucktown as some call it — our historical buildings were labeled condemned and bulldozed,” he said. “Now, we have the Sphar building with the third floor collapsed to the second floor, and this building is still standing and possibly about to be restored.”

Candidates also answered a question regarding how, if elected, they would address economic disparities in the north end of Winchester and support the revitalization of the city to ensure residents have equal access to opportunities and community services.

Book said businesses had been deterred from the north end because of the lack of basic utilities such as sufficient sewer lines. He said the city needs to address that issue to recruit businesses to the north side of Winchester.

Strode talked about the need for better housing, working with Habitat for Humanity and tearing down dilapidated houses. Shannon Cox agreed, citing the recent work on Lincoln Street.

Flynn said he would like to see committees formed in neighborhoods that could work together to improve their communities and properties.

Anderson said, if elected, he would first gather data by being hands-on and immersing himself in the community. He said it’s important communities become “politically mature” and vote for people who know the communities of which they are serving.

“Without a voice, you can’t be heard,” Anderson said.

Candidate Paula Thomas said there needs to be more jobs and community involvement. Reed said it starts with education and then transparent, in-depth conversations need to be had to come up with a solution fully.

Harrison said it’s important to get businesses on this side of town, and the north side of Winchester has been repeatedly left behind in the revitalization efforts over the years.

Burtner said while there hadn’t been much talk about racial and cultural divide at the forum, he is prepared to talk about it. He said the best thing he can do, is to be present.