Where in the World? Jonathan Bush, the Veaches and Vivions 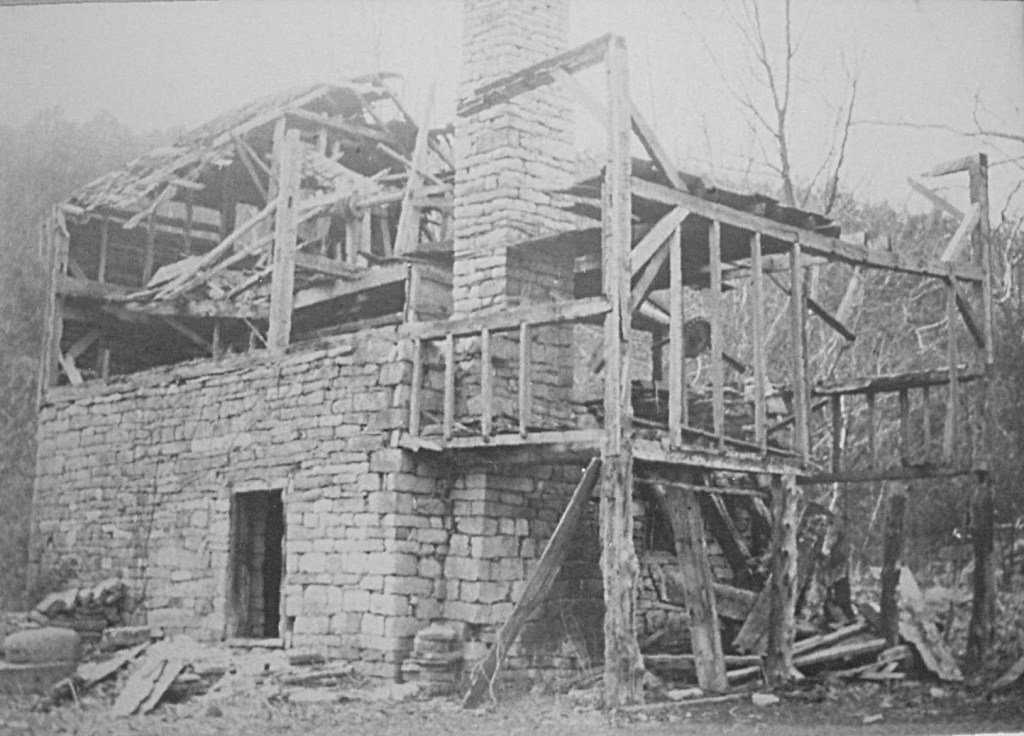 The Jonathan Bush Mill as it stood in the early 20th Century. (Photo from the Kathryn Owen Collection)

Jonathan Bush was a successful mill operator on Lower Howard’s Creek. His 3½-story mill, erected around 1806, was the first in Clark County known to produce flour for export to New Orleans. This highly successful operation ran under Jonathan, then his son William T. and others through the end of the century.

Jonathan built a stone residence near the mill. Both the house and mill are on the National Register of Historic Places.

Jonathan married three times, all in Clark County. His first wife, Polly Rawlings, died in 1814. She was buried in the Robert Richards-Mary Bush Graveyard on what is today Quisenberry Lane. Jonathan had formed a close relationship with his Aunt Mary after the death of his father, John Bush.

Jonathan married a second time to Diana Emerson. She died in 1849 and is buried in the graveyard behind Jonathan’s house. Several years ago my wife Clare Sipple (manager of the Lower Howard’s Creek Nature and Heritage Preserve) and I gathered and re-assembled the broken pieces of a large tablet that once covered her box tomb. There were not enough pieces left for us to read the lengthy epithet Jonathan had inscribed on the stone. Fortunately, an article out of the old Winchester Democrat (July 21, 1896) came to the rescue.

“In many of the old-time grave yards in the county may be found strange and peculiar inscriptions. Mr. R. H. C. Bush handed us the following which was copied from an old-fashioned tomb on John W. Hart’s farm near the old Bush Mill on Howard’s Lower Creek: ‘In memory of Dianna Emmerson, Born Feb. 7, 1791. Married to Jonathan Bush June 2, 1814. Departed this life March 5, 1849.

“Pr. Shannon preached her funeral Nov. 18, 1849 on the relative value of good qualities of this female. This favored child of nature who combines in herself these united perfection’s may be justly considered as the masterpiece of the creation; as the most perfect image of the divinity here below. Man, the proud Lord of the creation bows his haughty neck beneath her gentle rule.

Exalted creation itself shall respect the all powerful magic of her beauty; her charms may fade, but they shall never wither, and memory still in the waning of life hanging with fond affection over the blanched rose shall view through the veil of lapsed years, the tender bud, the dawning promises, whose beauties once blushed before the beams of morning sun. Composed by her husband A.D. 1855.’”

This flowery composition was not solely Jonathan’s work. A Google search turned up most of the above phrases in a book on elocution published in 1823.

In 1851, Jonathan married a third time, Ann Stuart, who died in 1853. She is buried in the Fielding Bush Graveyard on Waterworks Road. Jonathan wrote his will in September 1856; it was probated in January 1857. His grave has not been located.

After Jonathan’s death, his son William T. Bush ran the “Copper distillery,” which was described in sale ads: “The Distillery is not more than a half mile distant from two good mills. I can turn out, with ease, three barrels of whisky per day.”

In 1861, a financially embarrassed Bush was forced to sell the distillery “formerly owned and occupied by S A. B. Woodford, Thomas Woodford and W. T. Bush.” The last operator was described in an early newspaper, the Clark County Republican.

“A short distance below Taylor’s Mill was a distillery built by Will T. Bush and for years was operated by him. The last proprietor was the late Dudley Veal, of Fayette county, who operated it in the early part of the Civil War. When the heavy revenue tax was placed on whiskey, Veal, like most other country distillers, tried to evade it and was soon in trouble with the government. The latter confiscated the whiskey and sent a number of wagons to haul it to Lexington. Veal and his sons overtook the wagons and overpowered the guard in charge. The wagons were forced to carry the whiskey back to the warehouse, which caused more trouble.

“Veal was a very stubborn man and his obstinacy cost him a large amount of money. Not a vestige now remains of the distillery except a fine spring which formerly supplied it with water.”

Veal’s troubles were recalled in his 1897 obituary: “Died at his home in Fayette county, Dudley Veal, aged 87 years. He had been partially paralyzed for a long time. Shortly after the war he ran the old Bush distillery on Lower Howard’s Creek, and like most distillers of that time had trouble with the Internal Revenue department which cost him much time and money.”

The Vivion family counted a number of early residents on the creek. The progenitor of the Clark County family, John Vivion, came in from Orange County, Virginia, with Capt. Billy Bush and the Providence Church. He located on a farm southeast of Winchester on land Bush had secured for him. His son Thomas (1776-1865) lived on the north side of Lower Howard’s Creek. He and his wife Ann lie in a family graveyard on the farm of the late Rick Smith on Waterworks Road.

“William Bush Vivion, the oldest man in Mercer county died Wednesday [1898] in his ninety-eighth year, of the infirmities incident to old age. He was a native of this county, the oldest son of Thos. Vivion, who lived on Lower Howard’s creek not far from old Providence church and who died about the beginning of the civil war.

“William Vivion’s mother was a Bush and he was thus related to the large family of that name here.

“Seventy-five years ago he moved to Mercer county and bought several hundred acres of wild land which is now among the best in the county. This land increased greatly in value and at one time he was considered the wealthiest farmer in the county. His sons, however, invested largely in Western boom towns and he thus lost much of his wealth. His wife, who was Miss [Elizabeth] Christy, of this county, died many years ago and he never remarried.”

Where in the world? Edmund Taylor’s merchant mill