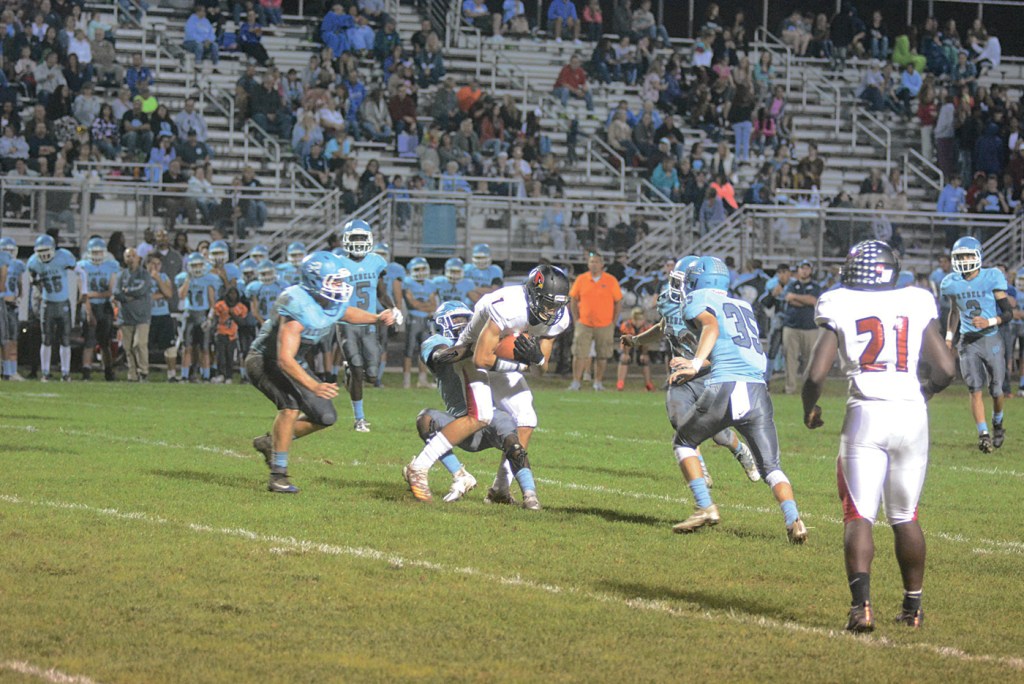 Farris Shakadih (7) gets tackled after catching a pass Friday in the second half of GRC’s 24-12 win over Boone County. (Photo by Micah Satterly)

George Rogers Clark traveled to the outskirts of Cincinnati and came out with a 24-12 victory over the Boone County Rebels.

GRC won the coin toss and chose to receive.

On the fourth play of their first drive, Nitavius Thomas broke out on a 42-yard touchdown run to give the Cards a quick 7-0 lead two minutes into the game.

The Rebels came up empty on their first drive.

GRC also could not get it going on their third drive until Thomas was able to secure his second touchdown out of the Wildcat formation from five-yards out to give the Cards a 14-0 lead with under a minute to play in the first quarter.

Boone received the kick after GRC’s touchdown and fumbled to give the Cardinals the ball back on the 10-yard line.

Will Henry connected to Chase Taulbee for a 10-yard reception in the end zone.

Once again, the Rebels came out empty on the next drive.

Henry threw an interception to on the next possession, allowing the Rebels to have a chance at redeeming themselves but failed to answer.

After a few more empty drives, Henry threw another interception with two minutes left until the half and this time Boone answered with a 9-yard touchdown reception.

The extra point was no good and the score was 21-6 GRC at halftime.

GRC squeezed in an extra point in the third quarter at the eight-minute mark.

Boone forced another fumble as the ball popped out of Thomas’ hands to end the third quarter and gave Boone possession back to start the fourth quarter.

On Boone’s first possession in the fourth, GRC turned the tables and Jehdon Jenkins drilled Boone’s running back at the line of scrimmage to force a fumble and the Cards recovered.

The Rebels managed to put another touchdown on the board with a 32-yard touchdown catch to bring the score to 24-12.

Tye Boyken got a finger on the ball and tipped it around, but the ball somehow managed to land in Boone’s receiver’s hands.

“We listened to our coaches when things got rough,” he said. “They get on us a lot, but they know what they are talking about. We listened to them and did what we had to do to come out with a win.”

GRC’s two interceptions and fumble could have been costly, but Gay said his team has learned to cope with adversity and make up for mistakes on the next play.

“They have taught us not to fold when it gets tough,” he said. “We have not folded yet this season and we do not have any reason to. You cannot give up when things get tough on the field. It is a game of possessions and you have to make up for it on the next play. We have learned to forget about mistakes and we did a good job at keeping our focus.”

Gay said as long as his team keeps faith in the coaches then the Cards will continue to keep the streak alive.

“We just have to keep being ready to play,” he said. “We have a tough game against Lafayette next week. We have to keep listening to our coaches and do what they tell us to do. We got this.”

Gay said although the Cards are off to a good start at the halfway mark of the season, he does not feel like they are performing at the level of their true capabilities.

“We are doing pretty good so far, but I think we could be doing better,” he said. “If we keep staying focused and do what we are supposed to do then I like our chances of making a good playoff run. We cannot try to be extra and overthink. We need to do what we are told.”

Gay said in order for the Cards to stay hot and continue the streak, they need to keep their composure.

“We have to stay humble and not overlook any opponent,” he said. “The season is not over yet and it is still far from over. We cannot be content with where we are now. We have unfinished business still and we want to be serious competitors. We do not want anyone thinking they have an easy shot at us.”

Thomas had 23 rushes for 142 yards and Will Henry threw 8-12 for 107 yards, one touchdown and two interceptions.

GRC will return to Cardinal Stadium for the first time in a month next Friday as they take on the 1-6 Lafayette Generals.