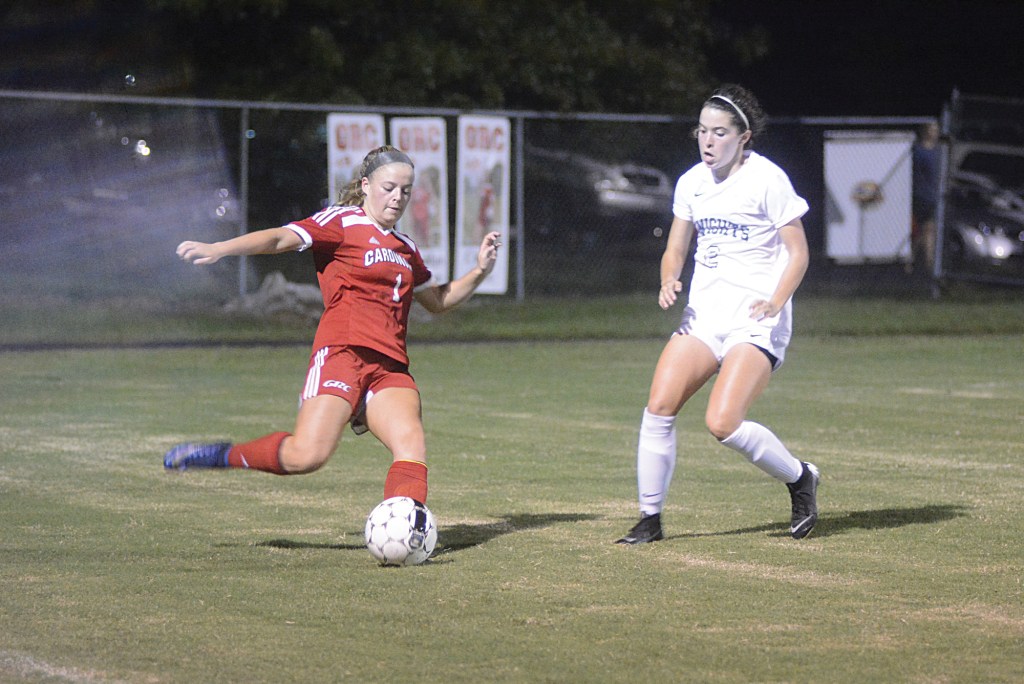 Shelby Vaughn clears the ball away from a Lexington Catholic midfielder Wednesday in the Cardinals’ 4-1 loss. (Photo by Micah Satterly)

Catholic was the first to attack and scored the first goal of the game with 24 minutes to play in the first half.

Less than two minutes later, the Lady Knights extended the lead 2-0 with another quick goal.

GRC continued to battle to bring the game back within reach and finally found the back of the net with 30 minutes left in the second half with a goal from Allie Bush.

Bush attempted the shot outside the box and curved the ball out of the goalie’s reach to cut the Cardinals’ deficit to only one goal.

Four minutes later, Catholic shifted the momentum back into their favor.

With some excellent passing, the Lady Knights were able to pull goalie Brooklyn Johnson far enough away from the goal for an easy shot and Catholic extended the lead 3-1.

The Cards had another opportunity to cut into the deficit as Delaney Manning’s free kick was pinned on the top of the crossbar by Catholic’s goalie and was denied a goal.

With 23 minutes left in the game, Catholic sealed the game with their fourth goal to give them a three-goal lead and the Cards could not find enough fight to make a comeback.

“Timid,” he said. “I think we played not to lose. We allowed them to control the game. In the first half, they got every loose ball because we would step back to defend and not to win. It is something to build on. Lexington Catholic is around number five in the state right now so they are going to make you look worse than what you are. I hope they showed us weakness we have and they showed us quite a few. We have time to work on them tomorrow and this weekend to prepare for district.”

Abner said the team is going to work on getting the ball out quicker and moving at a faster tempo to prepare for the district tournament.

“We will work on transition,” he said. “I think we struggled with defending the transition, too. We have not seen that a whole lot in other teams. We need to keep good shape and stay active. We have to be active throughout the whole game and not just parts of it. We are going to make mistakes, but do not stop and watch. Make the adjustment and work harder and get back into the play.”

Abner said his schedule has helped his team deal with pressure and not focus on having thoughts about going home if his team does not show up to play in the postseason.

“Our schedule prepared us for the postseason so we will not be hit with any surprises,” he said. “We played the number one team in the state earlier, we just played Lexington Catholic who is number five, Tates Creek was number eight and there is a couple others. When you play in the district, you play at a higher level. We are battle-tested and we are ready. Everyone has tried to throw everything they could at us.”

Abner plans to motivate his team and show them they can win any game thrown at them.

“We will need confidence going into the postseason,” he said. “Never take any game lightly, but at the same time, you will be better team if you play your best. Sometimes you are hoping other teams do not bring their best like tonight against Lexington Catholic. Regardless of assuming how things will go we will be ready.”