Toy finds place to help others at Campbell 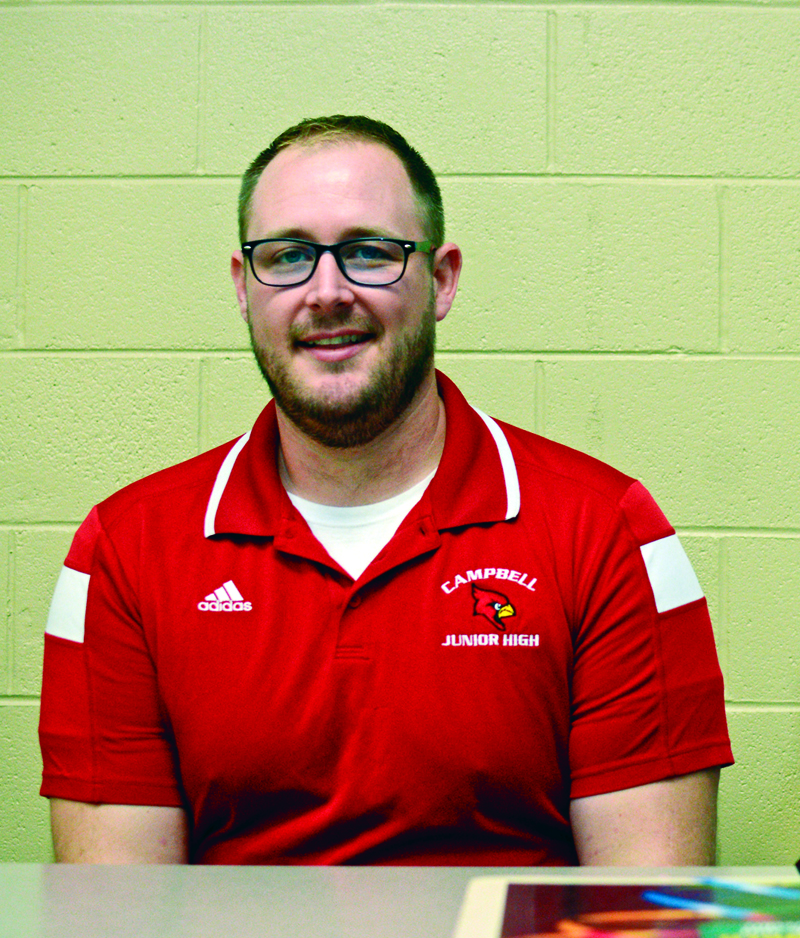 Luke Toy had been working as a project manager for a construction company, but something didn’t feel right.

He wasn’t 100 percent invested in his work; he had chosen the career for its monetary benefit.

Toy said he had enjoyed the science and engineering, but he wanted to do something more meaningful to him.

“I had greater passions for helping people than just building buildings,” Toy said.

So, he pursued ministry. Still, Toy yearned to help more people. His interactions with people as a minister would be limited. Then, Toy thought about teaching.

“I realized there’s a lot of need in the school system,” Toy said. “So that led me to want to be here.”

In the back of his mind, he had always considered it, but he finally got the push he needed.

Toy went on to pursue a master’s degree in education at the University of the Cumberlands and began his first teaching job at Robert D. Campbell Junior High School three years ago.

Now, Toy said he’s much more fulfilled and happy in his career even with the difference in pay.

“It makes no difference how much money you make if you’re not happy,” he said.

Outside of teaching, Toy said he enjoys playing music, fishing, hunting and spending time with his wife and 5-year-old son. The Toy family currently resides in Montgomery County.

Toy said he chose to teach middle school because it’s a critical age for adolescents; they’re trying to figure out who they are, trying to be independent.

“They need someone there to kind of help guide them through that,” Toy said. “And that’s kind of why I picked middle school.”

Toy said his favorite part about teaching is building relationships with his students. Toy has witnessed the struggles many of his students endure; he said he has learned how privileged he was throughout his childhood.

While he may be the teacher, his students have taught him, too. Toy said the biggest lesson he’s learned while teaching is how to be patient.

Toy’s wife recently sent him a meme that summarized it perfectly.

“If a doctor, lawyer, or dentist had 40 people in his office at one time, all of whom had different needs, and some of whom didn’t want to be there and were causing trouble, and the doctor, lawyer or dentist, without assistance, had to treat them all with professional excellence for nine months, then he might have some conception of the classroom teacher’s job,” Toy quoted the meme attributed to a Donald Quinn.

“That resonated with me,” Toy said.

Each class is full of students who each have different needs. Some students are slow learners; others are quick. Each has varying intellectual, emotional and behavioral needs.

Toy recalls his first day on the job. It wasn’t bad, but he was nervous. Perhaps, his age and life experience helped him, he said. He had also worked with children before in church groups.

However, Toy said he’s a much better teacher now. One of his goals this year is to get his students moving more in the station as well as teaching them to take more ownership over their learning.

He said he hopes his students remember his as being fair.

“I would like them to be able to say that it didn’t matter who you are … he always treated with you with respect,” Toy said.

Toy said he advises both his students and new teachers to learn to be OK with mistakes. Perfection isn’t attainable, Toy said, and that’s OK.

The RDC staff also make the job fun. When Toy tore his calf muscle last year, his coworkers took the liberty of decorating his knee scooter with pink hearts, stickers and more.

“That was pretty embarrassing,” Toy said.

But the moments Toy will never forget are more personal. When a student feels they can come to him to discuss their life, he remembers why he became a teacher in the first place.

“Those are big,” he said. “Because obviously when they come up, and they need to talk to you, they tell you things that you’re not expecting, but things that you know that you’ll be able to help them through.”