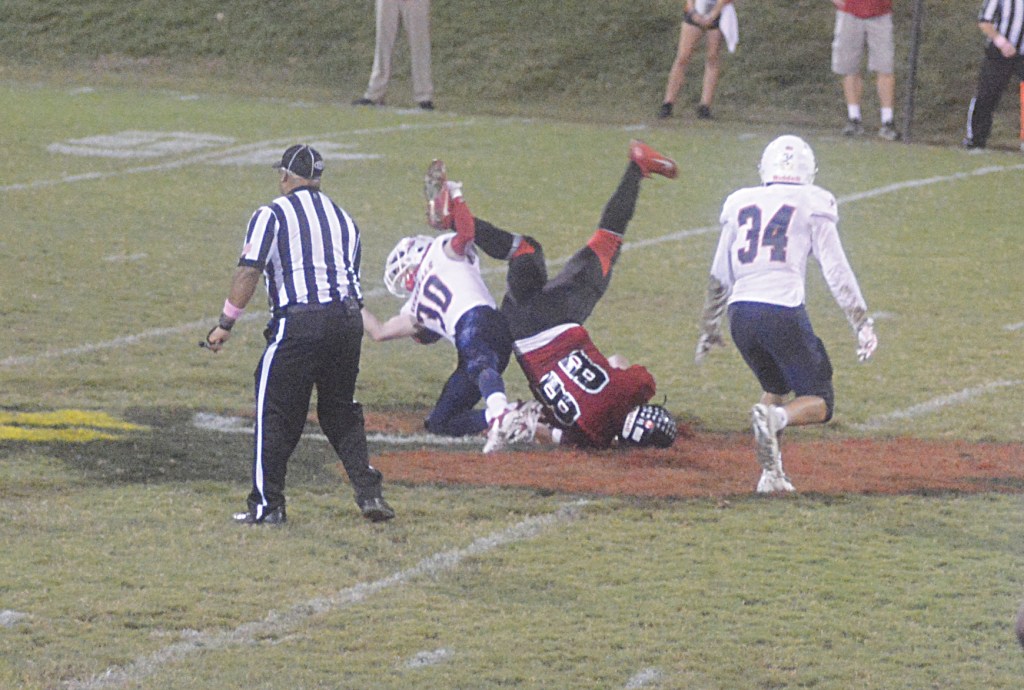 Chase Taulbee (88) gets flipped after catching a pass. He caught two passes for 12 yards and a touchdown in GRC's 26-7 victory over the Lafayette Generals. (Photo by Micah Satterly)

George Rogers Clark celebrated homecoming with a 26-7 win over the Lafayette Generals.

The Cardinals improve to 5-2 on the season and are on their first three-game winning streak since 2014.

GRC was ready to play from the starting kick off as Azariah Israel returned the opening kick 24 yards.

On the Cards’ second play of their opening drive, Nitavius Thomas broke out for a 56-yard touchdown rush to give him 15 touchdowns on the season and his team a quick 7-0 lead.

After an empty drive from both teams, Lafayette fumbled and the error gave the ball back to GRC after Hunter Dunn recovered.

Thomas then rushed for another 21 yards, fumbled and regained possession.

The Cards came out empty that drive once again.

After Lafayette still struggled to get the offense rolling, a mishap on the long snap before a punt sent the ball back into the end zone for a safety. The Cards extended the lead 9-0 at the beginning of the second quarter.

After driving the length of the field after stopping the Generals once again, Will Henry hit Chase Taulbee for a six-yard touchdown reception extending the lead 16-0.

Another empty drive led to another Cardinal touchdown.

Will Henry hit Farris Shakadih in the edge of the end zone for a 14-yard touchdown pass, giving Henry his second of the night early in the game.

The Cards led 23-0 with five minutes left until halftime.

After a long hour of a lightning delay, the football game resumed.

It might have been the spark Lafayette needed as they returned the kick off 35-yards just outside the red zone.

A desperation hail mary to the back of the end zone as the halftime buzzer went off sent all Lafayette’s hopes out the window as Zion Israel picked off the pass to end the half.

The Generals once again regained momentum to start the second half as they returned the opening kick off 60 yards to set them up with their best field position of the night.

After grinding a few yards the first two downs, a one-yard quarterback sneak put Lafayette on the board 23-7.

The Generals recovered the onside kick, but the offensive struggles continued.

With just three minutes played into the fourth quarter, Lafayette muffed a punt on their own 16-yard line to set GRC up in good position to extend the lead.

The Cards had to settle for a field goal to bring the final score to 26-7.

Head coach Oliver Lucas said GRC’s victory took off a lot of pressure from his team.

“This win tonight was a huge monkey off our back,” he said. “Anytime you beat a Lexington school and people have not seen that victory in a while is huge. Our offense and defense played stellar.”

“We believe we can play with anybody,” he said. “We have to continue to get better and execute. We have not arrived by no means. Just because you get a few victories does not mean you have arrived, especially when you are in uncharted territory.”

Lucas said he thought his team handled the adversity well after Lafayette turned the tables in the second half and seemed as though they were going to shift the momentum.

“I told the kids before the game and at halftime that things are going to happen out there, but you have to stay the course,” he said. “Do not let it upset you or take you out of the game. Continue to play hard.”

Lucas said his team is going to keep doing what they normally do to keep the streak alive.

“Momentum is momentum,” he said. “You ride that wave. As long as that wave is carrying you into shore, you continue to ride it.”

Thomas rushed 23 times for 150 yards and one touchdown.

Shakadih caught two passes for 24 yards and a touchdown.

Taulbee caught two passes for 12 yards and a score.

GRC will head to Tates Creek next week to take on the 3-3 Commodores.