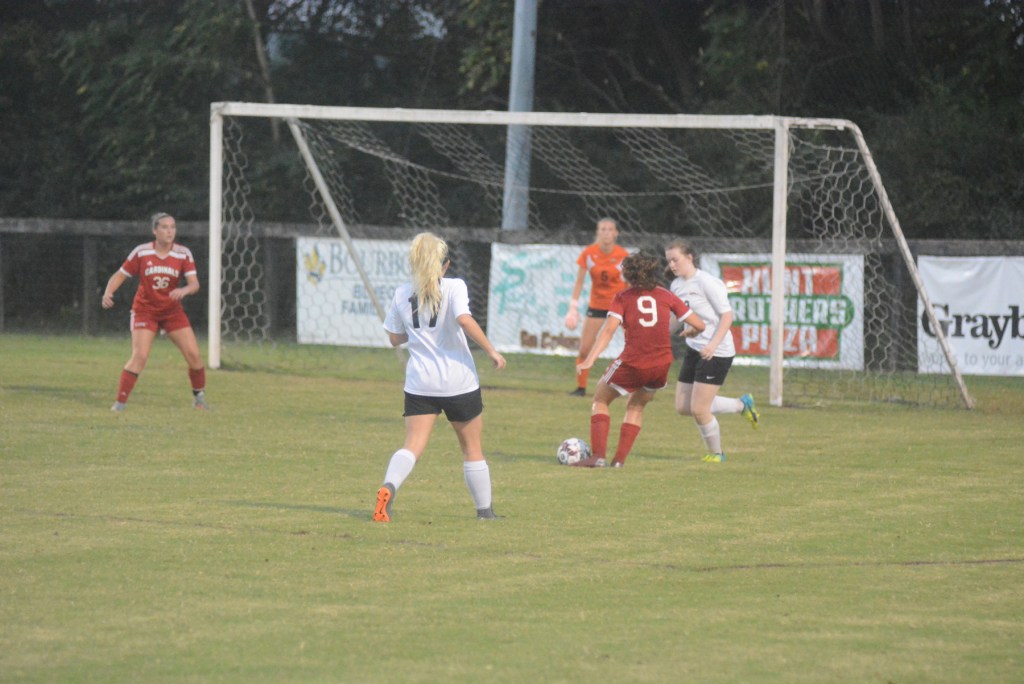 Caitlin Fike (9) prepares for a shot in the second half. She scored three goals in GRC’s 10-0 first round district win over Paris Monday. (Photo by Micah Satterly)

George Rogers Clark started off the 39th District Tournament at Bourbon County and ran away with a 10-0 victory over Paris Monday.

The Cardinals scored their 10th goal in the second half with 25 minutes left to play to mercy-rule the Lady Hounds who have not won a game all season.

GRC will return to Bourbon County 6:30 Wednesday to try and reclaim their district title for the third straight year.

Head coach Matt Abner said the Cards picked up the slack compared to the last meeting the two teams had.

“We played decent tonight,” he said. “We played better than the last time we played them. We went after them quick. We were able to take advantage of early goals which gave us a comfortable lead that we could hold on to. We may have let up a little bit after that, but we got it back together and played well. It was a good start to our district play.”

Abner said every team loses focuses after dominating a game from the beginning and he felt Monday’s victory was no different.

“Sometimes it is hard to keep focus,” he said. “I think we did a good job with preparing them for it. We went into half up 7-0, so we got them to understand the game is 0-0 at halftime. We do not ever tell them to ease up. We put people in different positions and allow defenders to go out on top. Kids get some time that they normally do not get to play and they work hard. They want that opportunity to show coach what they can do. That normally helps, but it is difficult. We have seen it all this season. We will play a team that has had a down season then the next game we will play a more dominant team. We have done a good job in preparing for anything.”

Abner said his team’s preparation will continue to be the key to success in allowing the Cards to get through the district and region once again.

“We always need to see what we can do better,” he said. “We can see where we fell short last time, see new openings and prepare for that. We will have a good, practice Tuesday to get ready and make sure we understand what we have to do to prepare for the next game. Mainly defensive stuff, but some on transition.”